Q. Can you help me find a high‑end stand-alone recorder? Skip to main content

Q. Can you help me find a high‑end stand-alone recorder?

I'd like to bite the bullet and buy a really good stand-alone recorder. I'd like it to be capable of recording eight to 12 tracks and be able to burn to CD. I want to get my hands on something really good and have a healthy budget of around £2000/$3300 to achieve that. What are my options?

The sort of stand-alone recorder you seem to be thinking of has died a bit of a death. Indeed, there have been no semi‑pro products released in years, due largely to the cost-effectiveness and capability of modern computer-based DAW systems. But despite this competition, when the cost of a computer, LCD, software, plug‑ins, preamp/interface and control surface/mixer are added together, stand‑alone studios can still seem like pretty good value. 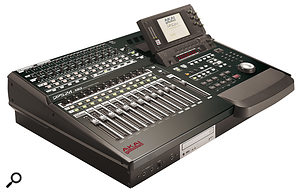 Although it may seem daunting to brave the second-hand market when looking to spend a couple of thousand pounds, you can find excellent quality stand-alone recorders that are no longer manufactured. The Akai DPS24 MkII and Korg D32XD are both good choices.Sadly, though, the multitrack Portastudio-style recorders currently on sale lack the professional interfacing, expansion-board slots, large screens, flying faders, sophisticated effects, dynamic processing, flexible routing and fader automation of older products. On the plus side, USB connectivity is pretty much standard today; the latest products are less prone to crashing, use stable solid‑state media cards of a size equal to the noisy hard drives of old, and also offer more tracks for less money.

There are also several high-end recorder-only products, such as the JoeCo Black Box Recorder, Fostex's D2424LV MkII and the Alesis HD24XR, all well-specified professional machines. But while they're great for recording and playback, they include neither mic preamps and faders, nor mixing, editing and CD-burning facilities. 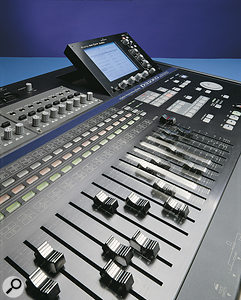 Of the manufacturers who once dominated the multitracker market, Yamaha, Korg and Akai have ceased to create new products. Roland manufacture a range of Boss‑branded recorders, including the BR800, BR900CD, BR1200CD and BR1600CD but their VS‑series recorders are no more. Tascam are one of the few companies keeping the faith, with their 2488neo. This is a 24‑track recorder which doesn't provide professional interfacing and mixer tools, but is easy to use, has an impressive 18 channel faders and includes an 80GB hard drive and USB 2 interface. Zoom are also still making multitrackers, although they've given their latest baby, the R24, the ability to function as a computer interface and control surface. It includes a rhythm machine and sequencer, records eight tracks simultaneously and plays back up to 24, but its mixer isn't particularly sophisticated, it doesn't record to CD, and it relies on the user shifting data to a computer with a drive.

Normally, there'd be no point in me recommending discontinued products, but this may be your best option. Probably the best way to answer your question, then, is to offer a mini buyer's guide to discontinued recorders that you can buy second-hand, or possibly as 'B-stock' from former distributors.

The good news is that even fully expanded flagship products go for modest prices. Akai's DPS24 was years in the making, and its research and development costs spiralled out of control, but the result, particularly the MkII, was very good. Most of its competitors could only carry out one command at a time, but this 24‑tracker offered real‑time multi‑tasking; it pleased those who cut their teeth operating professional tape machines, with a scrub control functioning a lot like those of its analogue forbears; and was credited for having fine quality on‑board preamps. Not content with providing motorised faders, Akai made them touch-sensitive too! In the same range was the DPS16, but although it recorded well, it wasn't in the same league. When the DPS24 came out it cost a bomb, but now your budget should be enough to buy even the MkII.

The DPS24's only real limitations were its mixer's routing, EQ and effects options — areas in which Yamaha led the way with their AW4416. It didn't have the best preamps in the world, but by using Yamaha's 0‑series digital mixers as a template, it trounced the competition, providing dynamics on every channel, along with very flexible EQ and routing. Its faders were motorised, and, impressively, the I/O spec included word clock and two card slots into which a range of Yamaha's Mini YGDAI I/O cards could be installed. The card slots were also compatible with Waves' Y56K board, which added eight channels of ADAT I/O and a selection of the company's best effects, EQs and compressors. The processors on the board could be patched just about anywhere in the AW4416's signal path, and were totally recallable. A few years later, Yamaha's AW2400 provided better faders, preamps and compressors, but it lacked some of its predecessor's professional interfacing options. Gone was word clock and the second card slot, but, worst of all, its routing design hampered the way the Waves card could be used.

Roland's VS range proved very popular, and culminated with the VS1824CD and VS2000CD. Each year, Roland improved introduced new OS versions and add‑on peripherals, before abandoning the professional end of the market, leaving Boss to make products with amp simulators and rhythm machines, for guitarists wanting to produce demos.

Korg also made a wide range of products, and their flagship D32XD sounded great. Its key strength was a facility for installing analogue preamp and compressor expansion boards, but it quickly disappeared off the shelves, to be replaced by the cheaper, but less capable D3200.

You should be able to create release‑quality recordings and mixes using any of the aforementioned products, but if you're used to working on a fast PC or Mac running modern DAW software, you'll probably find them relatively slow and clunky in many respects, not least when it comes to resource allocation and file backup.

If I had your budget and had to make a choice now, I'd opt for the Akai DPS24 MkII, and would chalk in the analogue‑expanded Korg D32XD as a possible alternative. The Yamaha AW2416 comes top in both the mixing and processing department — particularly if you can find one with the Waves card installed — but I find that it has a rather 'clinical' sound, which isn't to my taste.

Of those products that are still manufactured, the BR1600CD and Tascam 2488neo are the best equipped, but you do need to bear in mind that they are streamlined for demo work, at the expense of professional flexibility and quality.