Q. Can you solve my foldback problems? Skip to main content

Q. Can you solve my foldback problems?

I’m using a Yamaha EMX 5000-20 for live sound and I seem to be unable to get the foldback working for some sources, even though it works for others. I’m reasonably sure that I am using a pre-fader bus to send to the monitor, using the aux 1 output. With the aux 1 control turned fully up (clockwise), I still seem to get nothing from a microphone or guitar, whereas the keyboard is fine in the same channel with no changes. I can replicate the same problem in several channels too — I’ve tried four so far, all with the same result. Am I missing something obvious? Maybe a different signal level from the mic/guitar? But if that’s the case, why is the FOH end result fine? 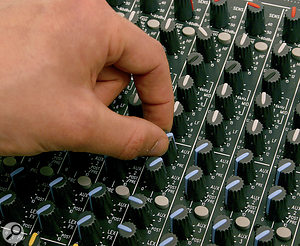 If, when using aux controls to create foldback mixes, you find that some sources fold back and others don’t, it’s probably a level issue — and solving your problem requires some methodical sleuth work!

SOS Technical Editor Hugh Robjohns replies: This is a very simple desk and there’s not much to get wrong, so working through the signal path logically should resolve the issue. I suspect this is simply a levels issue, probably complicated or confused by the fact that the keyboard has no acoustic presence on stage, whereas the vocals and guitar do. I’d suggest turning off or disconnecting the FOH and foldback speakers and, using headphones connected to the mixer, to analyse the signal levels at various points.

The first thing to do is route your mic, guitar and keyboard to the main stereo outputs. You might need the pad switch selected on channels handling line-level sources like the keyboard and (possibly) guitar (depending on how you have connected them to the desk). Deselect the high-pass filters and zero all of the EQ controls (set the knobs to face 12 o’clock). Start with the aux and effects controls turned down to zero, the Post buttons deselected (up), Pan and Balance controls in the middle (12 o’clock), Channel On buttons selected (with the associated LEDs illuminated) and put the main stereo output fader at its unity-gain mark (the black line at 0dB).

Now, bring up the keyboard fader(s) (with someone playing, obviously!) to the same unity-gain (0dB) mark and adjust the corresponding channel input-gain control(s) to get the signal peaks registering around the 0dB mark on the meters. The channel ‘signal’ LEDs should flash with signal, but the ‘peak’ LEDs shouldn’t, other than on the very loudest transients (and ideally, not at all). Repeat individually for the guitar and mic inputs.

You should now have roughly equal (peak) signal levels at the main stereo outputs for all three sources. Press the Stereo Output master channel’s AFL button above the fader and have a listen on the headphones to confirm that’s the case, fading up each of the sources one at a time to compare levels.

Depending on the nature of the playing/singing and sound-source characteristics, you may need to adjust the channel gain levels slightly to achieve more consistent perceived level balance, but this isn’t about creative mixing, it’s about identifying signal paths, so as long as you can hear each source element clearly and strongly, that’s fine.

Now for each input channel in use (mic, guitar, keyboard), set the aux 1 send level to the black triangle mark at 3 o’clock (the nominal unity-gain position) and — for this test only! — press the Post buttons on all of the input channels you’re using.

Deselect the Stereo Out AFL button, and instead press the AFL button above the aux 1 master output fader, and raise that fader to its unity gain (0dB) position.

Listen on the headphones, and fade each of your input channels up in turn. You should hear each of the corresponding sources at the same levels as they were when you monitored the Stereo Out AFL previously.

Assuming the aux sends now all work individually post-fader, deselect the Post buttons on each of the input channels. You should now have a full mix of all three sources that remains consistent, regardless of input-channel fader position. You can now adjust the relative balance of sources on aux 1 (if necessary) by tweaking the individual channel send controls.

Pull all the faders down, and reconnect the main FOH and foldback speaker outputs. You can now check that the signals are reaching the appropriate destinations at the appropriate levels by carefully raising the channel, aux and master output faders. Finally, it’s important to be aware that you may well have dialled in a lot more gain than previously on the guitar and mic channels, so feedback might start much sooner than before — adjust output levels as appropriate!