Q. Do surround-sound speakers need to be of the same type? 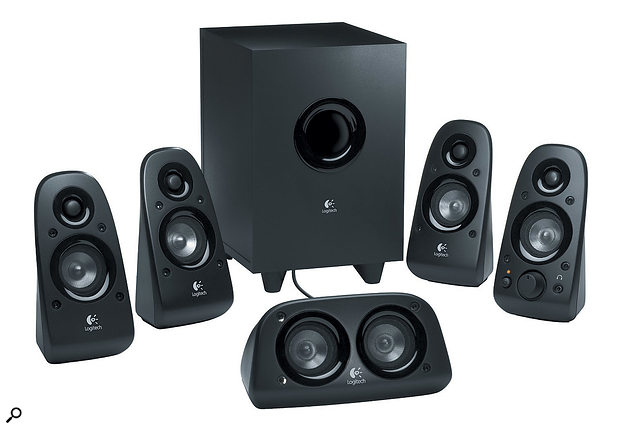 Cheap home-cinema surround systems like this might help you get a feel for surround-sound mixing, but they’re far from the best tool for the job.

I’m a sound engineer planning to have a surround-sound setup. The problem is, I already have a pair of Yamaha MSP5s and I don’t really want to spend the money required to have three more of them for surround use! So, can I have Yamaha HS5s for the centre and rear speakers, and also a different sub (something like KRK 10S)? Will it really make such a difference?

SOS Reviews Editor Matt Houghton replies: Well, depending on what sort of surround material you’re mixing on it could be workable — but it will never be ideal, and if you’re serious about doing commercial surround work in the longer term you’re going to want speakers designed to be used together. In the meantime, the trick in this sort of setup is to do all of your critical EQ/balance work in mono or stereo in the first place on your best pair of speakers, and then to pan things out to do your surround mix — safe in the knowledge that your EQ and relative levels already work, and that you’ll have more space for separation when mixing in surround. Your speakers might not match perfectly, but you’ll already have done most of the tonal work, and you’re just trying to get the right idea of positioning. A few years ago when I interviewed Kevin Paul (who, as then Head Engineer at Mute, had just re-mixed the entire Depeche Mode back catalogue for surround sound), I asked about budget setups for home-studio owners who wanted to dip their toes in the world of surround-sound. For similar reasons to those I gave above, he suggested that you could probably get by for a while with a home-cinema surround setup as a secondary monitoring system, with your critical work being done on your usual higher-quality stereo pair.

SOS Technical Editor Hugh Robjohns adds: Plenty of professional surround monitoring systems use different, typically smaller, speakers in the rear channels. However, the critical aspect is that they are voiced to sound the same as the front speakers, so that the tonality remains consistent regardless of where any sound is panned. Most high-end monitor manufacturers pay a great deal of attention to this aspect, specifically so that their monitors can be mixed and matched in the way you describe. However, tonal consistency is likely to be less well maintained at the budget end of the market, so it’s something you’ll need to assess first hand.

As Matt has said, the work-around is to make all your critical EQ and balance judgements on the higher-quality front L/R speakers first, and only after you have the stereo track working well to think about re-panning things for surround. You will probably then notice distracting tonality changes as sounds move onto the other speakers, but you’ll have to restrain yourself from reaching for the EQ controls, as you’ll otherwise be equalising for the speakers rather than the content! You may well need to tweak the relative balance of things after panning to compensate for the inherent panning-law effects, but be careful to tweak only because of panning offsets, not because a speaker’s response is over or under-emphasising the signal.

I’d add a small word of caution about using a domestic home-theatre system. Yes, the five mains speakers will all be identical and will have the same tonality, which is helpful. However, they’ll be compact and most of the bass will be diverted to the subwoofer via in-built bass-management arrangements. The potential problem is that home-theatre subwoofers are generally designed with the emphasis on delivering impressive explosions, not tuneful bass. Most seem to have a one-note bass quality so, once again, make all your bass EQ and balance decisions on your good-quality stereo speakers, not the home theatre system!