I have three Firewire 400 devices, which all run simultaneously, but I only have one Firewire 400 port, so using them all puts stress on the Firewire bus. However, I have a Firewire 800 port which is completely unused. Will my Firewire 400 gear work on the newer standard? If not, are there workarounds?

Many audio PCs come with both varieties of Firewire 400 (IEEE 1394a) ports. The PCI card, shown here, ships with the Rain Recording Nimbus PC, reviewed in SOS July 2007. Firewire 800 devices should happily run on these ports, providing the correct cables are used to link them up, although data transfer rates will be determined by the bus, not the device.

PC music specialist Martin Walker replies: Unfortunately, the answer is "it depends", but there are workarounds. Firewire 800 (more correctly termed IEEE 1394b) offers up to 800Mbit/second throughput compared with the 400Mbit/second of the previous Firewire standard (now known as Firewire 400 or IEEE 1394a). I should point out, however, that this doesn't mean that Firewire 800 is automatically 'faster', simply that it can potentially pass a higher throughput of data if and when required.

Firewire 800 devices use a nine-pin connector, and if you need the maximum throughput you have to connect a FW800 device via a nine-pin to nine-pin FW800 'Beta' cable to a FW800 port, and run them in 'Beta' mode. On the other hand, FW400 devices use six-pin (powered) or four-pin (unpowered) connectors, although it's easy enough to buy nine-pin to six-pin or nine-pin to four-pin 'bilingual' cables so you can plug a FW400 device into a FW800 port (or vice versa) and run it in backward-compatible legacy mode.

For musicians, two types of product spring to mind as potentially requiring this extra throughput: a multi-channel audio interface such as RME's Fireface 800, or an external Firewire hard drive, used to record and play back audio tracks. Many musicians mistakenly think that the Fireface 800 requires a Firewire 800 port, but this isn't strictly true: a single RME Fireface 800 will be perfectly happy plugged into a Firewire 400 port, and you only need the extra bandwidth of a Firewire 800 port if you want to simultaneously connect multiple Fireface 800 devices (the RME drivers support up to three). However, the Fireface 800 does offer the useful extra of a built-in Firewire 800 hub, so you can daisy-chain further devices such as an external hard drive, which should co-exist happily. 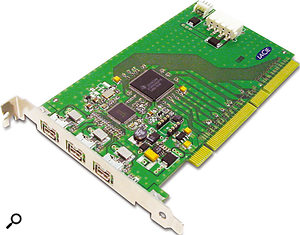 For PC users who need Firewire 800 ports, or for those on a Mac who need more than the standard complement, separate PCI cards are available. This Lacie card has been tested by RME, and is said to be fully compatible with their Fireface 800 audio interface. Now we come to the problem areas. You can find integral Firewire 800 ports on most modern Macs, and these work very well, so if your unused FW800 port is a standard Mac one you should experience no problems plugging in a FW400 device using a suitable bilingual cable.

However, such ports are rarely offered as standard on PCs, so PC users (as well as older Mac users, and those requiring more Firewire ports) will generally have to buy a Firewire 800 adaptor card (PCI/PCIe format for desktop computers, or CardBus/ExpressCard format for laptops). Unfortunately, although most such cards are cheap, many have been found to cut corners at the design stage to keep costs down, resulting in audio errors when pushed beyond FW400 speeds (RME's Matthias Carsten has done some sterling work in tracking down problem areas, which you can read about at www.rme-audio.com/english/techinfo/fw800alert.htm).

Moreover, several other audio interface manufacturers warn against using 'combo' cards either offering both USB and Firewire ports, or both Firewire 400 and 800 ports. Presonus, for instance, say that these can result in erratic audio performance or no audio recording/playback abilities at all, and recommend using a Firewire card that only has FW400 ports (and preferably with a Texas Instruments or VIA chip set), while Mark Of The Unicorn obviously agree that it's desirable to avoid them: MOTU recommend Firewire cards with Texas Instruments (TI) or Lucent chip sets, and few combo cards use these.

Given the number of audio interface manufacturers who recommend TI Firewire chips, my recommendation would be to buy an adaptor featuring a TI chip and several more Firewire 400 ports, or if you really need the extra FW800 bandwidth, a similar product with just Firewire 800 ports. The safest bet is to visit your audio interface manufacturer's web site to see if they recommend specific models.

Also, if you're running Windows XP with Service Pack 2, make sure that you've installed this Windows XP Hotfix (http://support.microsoft.com/kb/885222) to cure a 1394b bug that results in both FW400 and FW800 devices running on greatly reduced speeds.