Q. Why are audio transformers good to have? Skip to main content

Q. Why are audio transformers good to have? 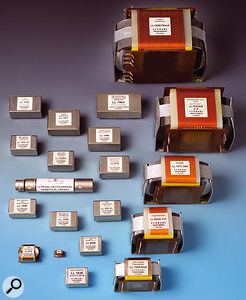 Transformers come in many shapes and sizes, but are almost all relatively bulky. Lundahl's range (some of which is shown here) demonstrate this. The boxy, silver-coloured devices on the left are mostly input transformers for mic and line signals, while the larger ones on the right are output transformers for use in applications such as tube amplifiers. Technical Editor Hugh Robjohns replies: Going back to the early days of professional audio — over 50 years ago now — transformers were used to provide electrical isolation between separate items of equipment, provide balanced interfaces (to help minimise interference), and often to provide signal gain (or loss) to help match levels between different devices. In some power amplifiers, they also provided a convenient means of obtaining an electrically independent feedback signal, and they also made generating multiple independent outputs or combining multiple inputs fairly simple.

However, transformers are inherently expensive and often bulky (especially when used with line-level signals), as you can see from the picture, right. They also tend to have an uneven response at the frequency extremes. What's more, they introduce significant frequency-dependent phase shifts, can saturate and become non-linear with high-level signals, and they are prone to external magnetic interference. Because of these reasons, manufacturers often make the fact that their product is transformerless well known to potential customers.

Thankfully, as solid-state electronic devices have improved and new circuit topologies have been developed, it has become possible to replace the traditional transformer in most applications with cheaper and smaller electronic circuits. Assuming a good design is implemented, those circuits can now out-perform transformers in almost every respect, matching their efficiency in signal-balancing applications (on input and output stages) and providing any required gain or impedance matching. Electronic circuits also have far wider signal bandwidths with a more linear frequency response, significantly lower distortion, and considerably better phase and transient response.

The only practical advantage that transformers still offer over electronic circuit equivalents is the full galvanic isolation: there is no physical connection between a transformer's input (primary) and output (secondary) terminations, which means that ground loops can't occur and electrical faults in one piece of equipment are much less likely to damage other connected equipment.

Having said all that, the very foibles and weaknesses of transformers lend a sonic character in many applications that a lot of people enjoy, and so transformers are often used specifically for these sonic characteristics as an intentional form of benign distortion. It is most likely for this reason that a manufacturer will 'boast' about employing a transformer in the signal path.