Q. How can I connect hardware synths to my setup? Skip to main content

Q. How can I connect hardware synths to my setup?

Currently, I have a MIDI keyboard, a Mackie Spike audio interface, an Apogee Duet interface, a UA Solo 610 preamp and a Neumann TLM103 mic. I use the Spike as a soundcard and run my MIDI through it, and the Duet for recording vocals.

I'm looking to get some hardware synths in the near future and need some advice. In preparation for the synths, I've bought a MOTU Express 128 so that I can have up to eight synths at once hooked up for MIDI. As both the Spike and Duet only have two audio inputs each, I am also looking to do away with those and get a better audio interface. However, if I get rid of them, I do not have a soundcard to produce sound via my monitors.

This is where I'm getting confused. How do I set up, say, three hardware synths via audio and MIDI (I believe you need both connected to get sound in your DAW?) and also get sound from my monitors out of my DAW? Can I get an audio interface that I can record vocals through and plug hardware synths into?

SOS Editor In Chief Paul White replies: You have a couple of options, one of which is to use an external analogue mixer to combine the output of your DAW (stereo) with your hardware synths. When the mix is sounding right, you record the output of the mixer back via your audio interface onto a new stereo track, but with the playback fader turned down during recording so the signal doesn't feed back on itself. Speaker and headphone monitoring would be done from the output of the mixer. I used to work in this way and got really good‑sounding results.

The other option is to buy an interface with plenty of spare inputs, ideally one that can be further expanded using an ADAT‑compatible preamp. MOTU's interfaces are generally reliable and straightforward (most include volume controls for your monitors) and I've also used M‑Audio with no problems. Expanders are available from under £200, such as Behringer's ADA8000, which will give you eight more inputs if you need more. You'd then connect your synths up to pairs of inputs (for stereo) and record their outputs just as you'd record any other audio. Most DAWs now have the ability to set up live inputs in permanent monitor mode, so you can always hear them even when they're not set to Record Ready. Working in this way, each synth would have both a MIDI track to control it and a stereo audio track to record it. 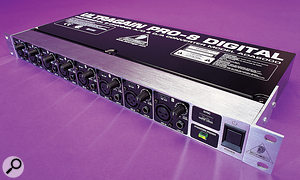 Expanding the number of inputs in your setup can be done at a relatively low cost. This Behringer ADA8000 can be found for well under and will give you an extra eight inputs to play with.

The advantage of working like this, rather than using an external mixer, is that you can apply plug‑ins to the synth channels if you need more effects. You can also come back to your mixes years later when the synths have been disconnected or sold.

The MOTU multi‑port MIDI interface will enable you to handle up to eight multitimbral synths at once without running out of MIDI channels, so that seems a practical choice.