Q. How much power does my stage system need? Skip to main content

Q. How much power does my stage system need?

I'm trying to work out how much power a PA system I work with draws, and I also need to come up with a sensible 'plug‑it‑all‑in' type of procedure. (I've read the Sound On Sound December '05 article 'PA Basics'.) It's mainly small venues we play in, such as function rooms and town halls. Looking at the manual for my Mackie SA1530z, I'm kind of baffled. It says:

Is this saying that a 16‑amp circuit is recommended? The spec sheet doesn't seem to list how much current the box will draw. Also, it's often stated that FOH, mixer and racks, lights and backline should be powered from their own separate sockets (three in total). Is it acceptable to power from both sides of a double socket and another adjacent socket, therefore, all being powered from the same ring main?

SOS Technical Editor Hugh Robjohns replies: The 16‑amp thing looks like a generic suggestion to me. In the UK, standard domestic outlets are nominally 13A anyway!

Essentially, what they are saying is that it needs to be plugged into a sensible supply. The typical average current will be a few amps at most, but the initial inrush current on switch‑on will be considerably higher, so don't try to turn everything on in one go!

If you need to know the real current and power‑consumption figures, invest in something like an energy monitor, such as the one I've found here: www.maplin.co.uk/plug-in-mains-power-and-energy-monitor-38343. This one is marketed by Maplin in the UK, but I'm sure you'll find similar devices from all the usual suppliers. You simply plug in the device you want to know about, and the display will give you the current and power being consumed, as well as the supply voltage and frequency. It's a really handy device and I use mine a lot when testing and checking equipment.

Regarding the use of wall sockets, assuming that you're working with a PA and backline system that is consuming less than about 4kW in total (which would be most systems for a modest‑sized venue), use a double socket to run all the audio equipment. That minimises any problems with ground loops. 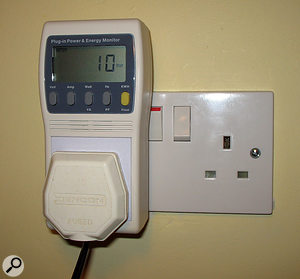 If you need to know how much current your setup is using, a simple energy monitor like this should do the trick: plug in whatever you'd like to measure and its power consumption will be displayed.

Run all the backline from one side of the double outlet, and all the PA (FOH, racks, PA and monitors, for example) from the other side. Supplying the two systems from their own RCDs (Residual Current Devices) is essential too, particularly from the point of view of preventing a backline fault from taking out the PA. If the musicians want to use their own RCDs for their gear, that's fine too!

Running the FOH on a long mains extension from the PA power‑supply socket (or distribution board) continues the theme of 'star grounding' and will minimise the potential for ground loops in the PA system. Run lighting from a different socket (or sockets) and try to keep the dimmer racks and cabling well away from the audio cables.