Q. Which of these mics is best for recording my guitar? Skip to main content

Q. Which of these mics is best for recording my guitar?

I have a nylon‑strung Ibanez guitar, which I think I paid $200 for. The electronics in the guitar are not cutting the mustard: the lows seem to pick up too heavily, while the mids and highs are thin in tone. The guitar sounds much better played acoustically than it does recorded plugged in, which leads me to my question. Which of the following mics would be most suitable for recording my guitar: the Shure SM57 dynamic or the Sterling Audio ST51 condenser? I don't want to break the bank on a mic, and these appear to be the two options available within my budget. I'm mainly concerned with recording my guitar. The condenser mic isn't a necessity unless it's the best option of the two mics I've mentioned.Via SOS forum 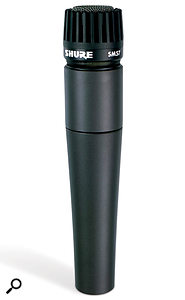 Classic mic that it is, the SM57 won't usually be the first choice for acoustic guitar. However, if you're after a more percussive sound within busy arrangements, it may be just the job.

SOS contributor Mike Senior replies: The textbook response to this question would be that a condenser microphone is the better bet, on account of its typically more extended frequency response, higher sensitivity and lower noise. Whether the textbook answer holds in your case will depend on a couple of factors.

Firstly, if you're planning on incorporating the recorded guitar within a wider arrangement, the extended frequency and dynamic range of the condenser may be overkill, depending on the nature of the arrangement. Although the dynamic will tend to give you a woodier and more percussive sound with less sparkle, and will not normally perform as well in exposed situations, if you're slotting the sound into a small space in someone else's production, or building up your own tracks primarily based around MIDI devices within a software DAW, then a less hi‑fi sound might actually be an advantage. Secondly, if your budget is extremely limited it's possible that your recording hardware may have no phantom‑power provision. If so, you'll only be able to use the ST51 if you upgrade your audio interfacing, beg/borrow a separate hardware unit of some kind, or invest in a separate phantom‑power supply (such as Sterling's own PHP1).

If you do choose the condenser option, though, my own experiences of entry‑level large‑diaphragm mics (although admittedly not the ST51 itself) suggest that you'll need to be quite careful to avoid excessive pick/fret noise, because I've always found such mics to be a little harsh‑sounding at the top end. This could be particularly relevant in your case, as the nylon strings aren't likely to be as bright‑sounding as steel strings would be, and if you decide to use any EQ to brighten the instrument at mixdown this will almost certainly emphasise any extraneous noises. If you're looking for additional hints on producing the best recorded sound, check out our April 2010 cover feature on recording acoustic guitars, which is now free to view on the SOS web site at /sos/apr10/articles/acguitar.htm. Don't forget to have a listen to the article's associated audio files as well, as these showcase a variety of different mics (including the SM57), mic positions and mix‑processing techniques.