Q. How can I create the sound of a crowd? Skip to main content

Q. How can I create the sound of a crowd?

I'm working on a song and have all the parts nailed, but I think the outro chorus is lacking something, so I've decided to try giving it the feel of a large crowd singing the outro, with me singing some lead over the top. I can most compare the feel I'm trying to achieve to the tracks 'Dungeness' and 'You Know' by Athlete. I've tried several overdubs of my own voice, and a few of my mates have given it a go too, but it's still not sounding right. Is it a case of literally squeezing a crowd into my living room and recording them all at once, or should I use a multitude of different tones/pitches/styles from fewer voices? 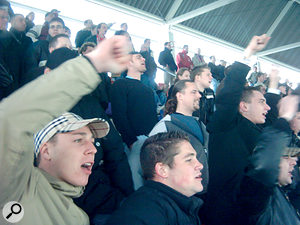 If you're trying to get that convincing crowd sound, you should never sing alone...Photo: Vincent Teeuwen

SOS contributor Mike Senior replies: If you want this kind of crowd sound, you'll get the best results if you use as many different people as possible. Overdubbing just a couple of people multiple times is very time‑consuming and is unlikely to sound that convincing. Much better to get a half‑dozen people in a room and record them all at once. You'll get more voices in less time, and the result will sound more convincingly crowd‑like because of the variations between the performers' voices.

Even with a larger handful of people, you'll still probably want to layer up a few takes to fill things out a bit, spreading them out to some extent across the stereo spectrum when you mix. If you can slightly rearrange the positioning of the performers between takes, that will also introduce a bit more variety, and you might consider changing mics, too. In case you've not already spotted it, I noticed that those Athlete songs include lower harmonies as well, which thicken the texture, so if you don't have anything like that in your song, you might want to think something up.

One practical problem you'll have to deal with, though, is delivering a cue mix to the performers, as I'm guessing that you may not have enough headphones and headphone amplifiers to give each performer their own foldback. One solution would involve first routining the parts in the control room until the performers are comfortable with what they're doing. In any group of singers, you'll find that there are one or two who lead, while the others follow, so when the time comes to record, give your available headphones to the leaders and instruct the rest of the group to follow them. As likely as not, everyone will be able to hear a little headphone spill as well, which will help timing, but if it's still a problem, get some cans on yourself and beat time in the live room.

This setup can work if your singers are fairly confident (or amply refreshed!), but the most common drawback with too few headphones is that the singers without them will feel a bit exposed without a cue mix and hence perform a bit tentatively. If this proves to be a problem, the alternative would be to use speaker‑based monitoring in the live room while recording. The difficulty there, however, is monitor spill, and although you can put the speaker in the null of a directional mic to reduce its pickup (a figure‑of‑eight mic will work best here), you'll inevitably find some of the cue mix leaking into the background of your takes. This has two ramifications: first, you need to make sure that the arrangement of your backing track doesn't change significantly after the crowd overdubbing sessions, otherwise the spill may produce an unwanted 'ghost' of any parts that have later been removed; and second, you'll need to work with the miking distance and the monitoring level to keep the spill level within reasonable limits. Given that there's no avoiding the spill, I'd also recommend recording for long enough on either side of the vocal parts that you have some freedom to decide exactly where to fade the spill in and out at the mixdown stage. It may sound odd if the spill cuts out abruptly at the end of the last phrase, for example, rather than waiting until a song‑section boundary.

Whether monitor spill is an issue or not, I reckon you're probably better off trying to catch the sound as dry as possible, as most small‑room sounds are unlikely to aid the effect you're after. This leaves you more flexibility to simulate a larger, more crowd‑pleasing acoustic artificially. As to what effects to use, a lot of people would instinctively reach for reverb, but I think you'll probably get much closer to the sound you're after if you rely more on slapback delay. Try delay times in the region of 100ms. If you're after a slightly more aggressive tone, you might consider sending the delay's output through a guitar amp modeller as well. Usually I find that a decent slapback does enough that you can then use reverb just for some subtler blending or to sketch in an impression of a large room size, both of which roles can actually be filled by an effect with a fairly quick decay, to avoid cluttering the mix.