Q. How can I make the most of a small studio space? 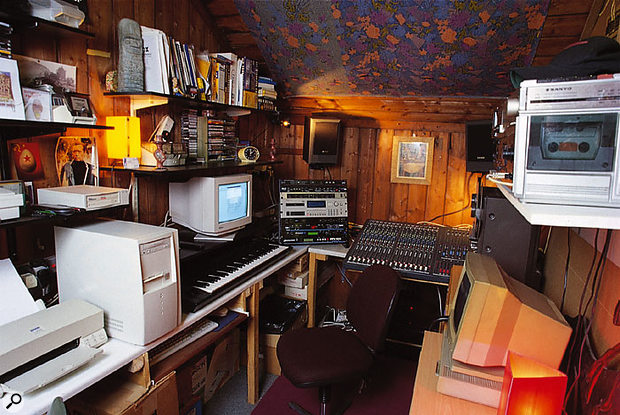 When space is limited, you need to think carefully about how to lay out your studio.

I'm just about to set up a studio in a room of my house and I was wondering if you have any tips on where to put everything. I have quite a few keyboards, sound and effects modules, guitars and a computer workstation, and I also record vocals, so I need to provide for all those things. The room I have is quite small and I know it'll never be perfect in terms of acoustics, but can you offer any advice on general layout?

SOS contributor Tom Flint replies: If your workspace doesn't feel right, you'll probably find it difficult to commit yourself to doing any work. Get it right, on the other hand, and hopefully inspirational recordings will follow!

The way I see it, a typical home studio has three important spots where most of the activity takes place, which we'll call the engineering seat, the performance seat and the listening seat, and it's a good idea to start by thinking about where these might be best situated. The engineering seat is where you'll be when working at a computer, hardware multitracker or stand-alone sequencer. This is where the majority of editing, mixing and programming takes place, and is therefore somewhere you are likely to be for long periods of time. The performance seat is the place where music is created and played, perhaps using a workstation keyboard, a guitar or a simple MIDI controller. It can even be the same place as the engineer's seat if you use a desk with a sliding keyboard shelf. The last significant spot is the listening seat. Even the smallest studio needs one, in my opinion. It is where you can relax with a cup of tea, listen to your music and ponder. Without one, your studio will merely be a place of work and you'll be tempted to leave it whenever you feel jaded. Naturally, this position should be angled towards the studio's speakers, but you won't be doing any really critical listening from here so you needn't worry too much.

For efficient working you'll want to have the most frequently used bits of kit within reach from the key working positions. If, for example, you are using hardware multi-effects processors patched into the send/return loop of a workstation, you'll want to be able to easily reach the effects parameter controls during mixing. Many pro studios tend to have racks of gear under the desk, but I avoid this arrangement at all cost. If, like me, you find touching your toes a struggle, you'll be much more comfortable having everything up at eye level. Not only does this leave leg room below, it also makes the programming of effects units or rack synths a more appealing prospect, allowing you to get the most from your equipment without having to move from your playing or mixing position. The space under the desk need not be wasted though. I use mine to store boxes and unused bits of kit, and it is also home to my two guitar amps, which I don't need daily.

If you are recording your own vocals and use hardware preamps, it is also vitally important to have them close to hand when standing near the mic, so that adjustments can be made while singing. In my setup, for example, I have a 10U rack of gear seated on top of my desk so that all my effects and preamps are between three and five feet high, which is ideal for checking settings and making adjustments. If the preamps are feeding a multitracker or computer workstation, it is also useful to be able to see the input meters on the display screen from the vocal position, at least while levels are being established. Once again, if everything is to hand, excessive levels can be curbed by simply reaching for the preamp output level control. It's often possible to use footpedals to remotely adjust transport controls when performing, but it is well worth arranging things so that recording devices can be manually operated too. 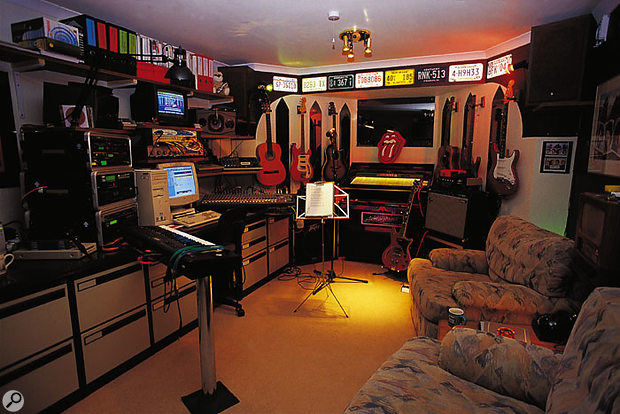 A comfy chair or two can make your studio a much nicer place to be.

Having the right desk surface can make all the difference, and often the most effective option is to build your own so that it fits the room, your equipment and your own physical stature. I built my desktop at a height that allows me to comfortably play my master keyboard either when I'm standing up or when seated on a stool. In fact, I have everything, including my multitracker, placed on the same desk so that it can be operated from both positions. You'll save money by building your own desk, too. My desk, which is nine feet long and two feet deep, has a frame built from thick planed pine and an MDF top, and it probably cost less than £40 in materials.

Putting up some shelves will give you somewhere to put boxes of leads and adaptors, old copies of SOS and other general studio clutter. The side benefit is that by placing them carefully they can also be used as a crude, but often effective, form of acoustic treatment. You might also consider hanging your guitars on the wall to free up floor space and mounting monitors on wall brackets to free up the desk.

One of the most limiting factors governing your studio layout will be the interconnectivity of the gear. Every studio requires power, audio I/O and, in most cases, a network of MIDI connections. For mains power, I like to wire up my own plug-boards so that I can cut the cable to the required length and run it around the edge of the room, well away from doorways. In fact, it's a good idea to make sure that there aren't going to be any cables running in front of doorways, cupboards and so on, otherwise sooner or later they'll get hooked on a fast-moving foot and will do some damage to you or your equipment. Furthermore, a patchwork of wires makes vacuuming difficult. Being able to clean a studio effectively is an important consideration, because dust can seriously damage audio equipment such as mics or faders.

MIDI leads are best kept as short as possible, because the data stream doesn't include any error correction and errors become more likely the longer the cable is, so it's worth planning the MIDI layout early on. If MIDI Merge or Thru boxes are used in the system, these can be carefully placed to act as hubs for the network.

It's possible to buy both audio and MIDI leads in a variety of colours and this is well worth doing, because it makes it far easier to distinguish each cable from the rest. Otherwise it's a good idea to label each lead using stickers wrapped around either end. Labels can be used for mains plugs too.

Before building your studio, it's also worth remembering that bad posture and poor ergonomics can cause repetitive strain injury (RSI) and other uncomfortable conditions. For more on the subject, check out the feature SOS ran in the January 2002 issue (www.soundonsound.com/sos/Jan02/articles/studioergonomics.asp).