Q. Did Mellotrons use tape loops or not? 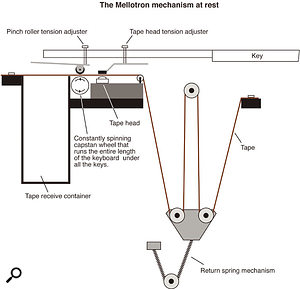 The Mellotron mechanism at rest...

I've read some conflicting opinions about the Mellotron. Some say that it used tape loops but others are saying that playback stops after eight seconds. Surely if tape loops are used, the sound would sustain indefinitely. Can you put the record straight?

SOS contributor Steve Howell replies: Yes, Warren — there is some confusion regarding the workings of the mighty Mellotron, so let's sort it out now. [We've added a insightful YouTube video (below) showing the internal mechanics of the Mellotron  — Web Ed.] 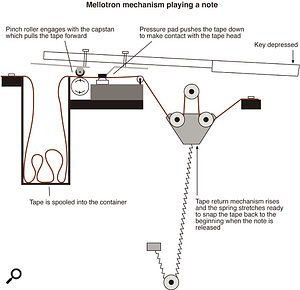 ...and the Mellotron mechanism playing a note.The Mellotron (or the Chamberlin, from which the Mellotron is derived) does not use tape loops. Each key has a length of tape below it that lasts approximately eight seconds. In effect, each key is a crude tape machine and when a key is pressed, a pinch roller moves down onto a constantly rotating capstan that runs the length of the keyboard. The tape is then dragged forwards and over a tape head and the sound recorded on that tape is played back (see diagrams). When the tape has come to an end (often stopping somewhat gracelessly!) that's it — no more sound will be made by that key until you release it, whereupon a spring pulls the tape back, ready for use again.

Mechanically, the Mellotron was a nightmare — 35 tape heads to keep aligned, 35 pinch rollers to keep clean, and 35 pressure pads to adjust so that the tape made proper contact with the heads (not too much pressure, not too little). It was necessary to keep an eye on those return springs, too (all 35 of them!), because if they malfunctioned, the tape wouldn't be returned to the actual start and subsequent playback would start some way into the sound, resulting in the characteristic 'clicky' Mellotron effect heard on so many records. However, this had another side effect; if the tape didn't return to the start, you wouldn't even have eight seconds to play with!

This limitation regarding sustain was the biggest frustration for most Mellotron players and it spawned a unique 'crawling spider' playing technique, whereby sounds would be artificially sustained by playing different inversions of chords before the tapes ran out.

One of the Mellotron's most famous players was Rick Wakeman. As well as playing Mellotron as a session player on David Bowie's 'Space Oddity', he was, of course, to rise to fame as the golden-caped keyboard player of Yes, boasting two Mellotrons in his massive keyboard rig. Such was his frustration with the instrument that he funded a project with one Dave Biro to create the Birotron, which did use tape loops that rotated continuously. The basic principle was much the same as the Mellotron, except that continuous loops were used for indefinite sustain. However, this project never really got off the ground and only 35 Birotrons were made. Wakeman had four (of which two were stolen) and the instrument was used on Yes's Tormato album.