Q. How can I set up my Korg Kaoss Pad to act as a pitch-bender? 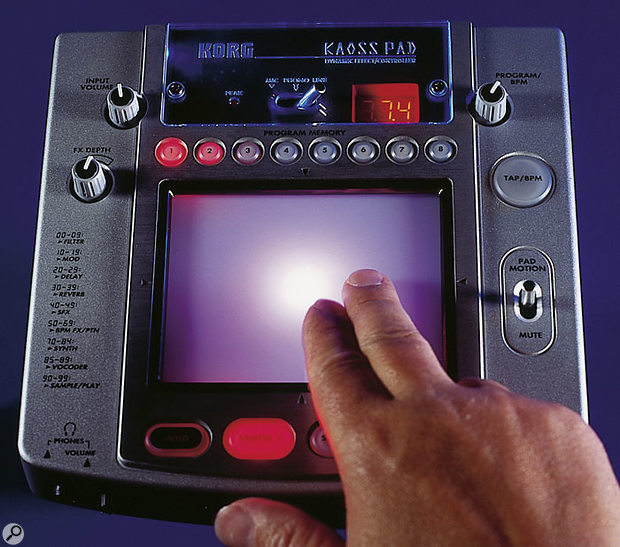 Can you please tell me how to set up the Korg Kaoss Pad KP2 as an ordinary pitch-bender?

Reviews Editor Mike Senior replies: Hold down the Tap/BPM and Rec/Stop buttons at the same time, and after a second or so you'll enter the MIDI editing mode — various buttons will light up and the MIDI channel will be shown in the display. You can at this point change the MIDI channel as necessary using the Program/BPM dial. If you're only wanting to transmit MIDI pitch-bend messages from the Y axis of the pad, then make sure that only the Program Memory 5 button is lit. If you want something transmitted from the X axis as well, then the Program Memory 4 button should also be lit. Pressing any button briefly will toggle its lit/unlit status.

Now to get Y axis movements sending MIDI Pitch-bend messages. Still in MIDI Edit mode, hold down Program Memory 5 until the currently assigned Y-axis controller (by default MIDI Continuous Controller number 13) is displayed in place of the MIDI channel number. Use the Program/BPM dial to bring up 'Pb' on the display. If you're also wanting to set the X axis, press and hold Program Memory 4 until its controller number (by default MIDI Continuous Controller number 12) is shown, and adjust as necessary. Finally, to exit MIDI Edit mode, hold Rec/Stop until you're back in the normal operating state.

A quick bit of general advice too — the unit will automatically leave MIDI Edit mode if you leave it alone for more than 10 seconds, so don't hang around too long when making settings, or you'll be dumped back into the normal operational mode. I find that it's worth toggling a random one of the Program Memory keys on and off occasionally, as the activity keeps the unit in MIDI Edit mode and gives me time to think and consult the manual!

There is another thing to think about when setting the KP2 to transmit pitch-bend information: a normal pitch-bend wheel is sprung so that it resets the pitch whenever you let go of it. Unfortunately, the Hold button doesn't affect MIDI transmission in the same way as it does the response of the internal effects, so the degree of pitch-bend will always stay where it is when you remove your finger from the pad. (Apparently the KP1 doesn't suffer from this problem.) This isn't necessarily a problem, however, because you can effectively do a rough-and-ready pitch-bend 'spring-back' manually, especially if you're able to use both hands: one to pitch-bend and the other to tap the centre of the pad, resetting pitch-bend to zero. If you only have one hand free, you could keep one finger in the centre of the pad while pitch-bending with other fingers. However, the finger that you leave in the centre of the pad will decrease the range over which the rest of the pad operates, so you won't get the same maximum bend range.

If you really need to be able to zero the pitch-bend exactly without sacrificing pitch-bend range, I'd suggest putting a controller button in-line to do this (I'd use one of the ones on my Peavey PC1600X for this) and setting it to generate a 'centred' pitch-bend message. But, to be honest, if you're using the KP2 for subtle pitch changes, it should be adequately accurate to zero the pitch-bend manually. If you're doing mad sweeps the whole time, then it may not even matter if you're not able to zero it perfectly.

However, if you simply have to have mad pitch sweeps along with perfect pitch-bend zeroing, then consider restricting yourself to pitch-bends in only one direction, with the zero point at the top or bottom edge of the pad, so that you can accurately reset the controller manually (finding the middle of the pad accurately is tricky, but finding the edge is easy). To do this for upwards-only bending, set your synth to play an octave higher than you want it (assuming that the bend range will be an octave). This will give you two octaves' shift above whatever note you're playing, with the low edge of the pad representing the former zero-bend position. Reverse the idea for downwards-only shift. If you really want to shift both ways, then you could assign a normal MIDI Continuous Controller (CC) message to the other axis and then use that to control the other pitch-bend direction, assuming that the synth you're triggering allows ordinary controllers also to modulate the pitch — my Korg Prophecy does. You won't get the same controller resolution out of a MIDI CC, so large shifts may sound stepped, but this will at least give you both directions of bend from the pad, and with exact pitch-bend reset.

Having said all of this, there is one other workaround to this problem, which provides all the functionality of a 'sprung' pitch-bend wheel, but it requires that you use a synth with fairly flexible modulation routing. Two of the KP2's transmission types do actually exhibit a 'sprung' action: Modulation Depth One (Y=5-1) and Modulation Depth Two (Y=5-9), activated in MIDI edit mode by Program Memory buttons one and two respectively. Both of these will automatically send their minimum values when you let go of the pad, as if you had moved your finger to the centre of the pad. If you switch both of these types of transmission on in the MIDI edit mode, then the top half of the Y axis will transmit MIDI Continuous Controller number one, and the bottom half will transmit MIDI Continuous Controller number two. The problem is that you can't change the controller assignments for this transmission type, so you'll need to assign the two controllers to upwards and downwards pitch modulation respectively to make it all work. The same caveat concerning controller resolution applies as before, but you do get a true pitch-bend wheel-style action. If your synth won't allow this modulation routing, you may be able to use your sequencer or MIDI controller to convert the MIDI CC messages to MIDI Pitch-bend or Aftertouch messages to achieve the same result.