Q. How can I tell if a pair of mics is well matched?

I bought a Rode NT1A a few months ago and I'm now considering buying a second one. How can I tell whether the two mics are closely matched enough for use as a stereo pair? In any case, how important is it that the two mics behave identically to achieve decent results in stereo recording? 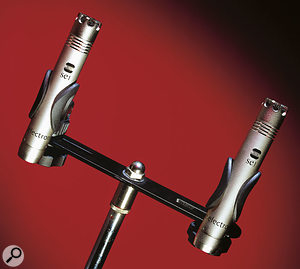 A few simple tests will establish whether a pair of mics, like these SE Electronics SE1s, are accurately matched.Technical Editor Hugh Robjohns replies: To answer the last part of the question first, if you plan to use the mics as a coincident pair (mics placed very close together, usually at 90 degrees to one another), stereo information is conveyed by small level differences between the left and right channels. Those level differences are generated by the combination of the angle of sound incidence to each mic and the mics' polar patterns, and any discrepancies caused by poorly matched frequency or polar responses will destroy the positional accuracy of the recording and cause a blurred, unstable stereo image.

When assessing the performance of a mic, there are three main characteristics to consider: sensitivity, frequency response and polar pattern. Here is a quick and easy way to compare the behaviour of a pair of mics, and hence gauge their suitability for use as a stereo pair. You will need an assistant to talk at the microphones, and a large enough room to be able to walk in a circle around the mics — ideally the room should be fairly dry-sounding too.

Rig the two mics on separate stands and arrange the first so that its front axis (ie. the most sensitive part of its polar response) is pointing horizontally forward. Position the second mic directly above the first, with its capsule as close above the first mic as possible, and arrange it to point in exactly the same direction. The gap between the two mics should be exactly at the level of the mouth of your helpful assistant, who will provide a test signal by talking directly on-axis to the mics from a couple of feet away. It is important to stay outside the region where the proximity effect starts to occur for this test, and two feet is usually a safe working distance. Check both mics are set to the same polar pattern (if switchable) and remove any high-pass filtering or pad settings.

Plug each mic into a separate channel on your mixer and pan both centrally. Make sure there is no EQ or dynamics processing being applied to either channel. If your mixer has a phase-reverse facility, switch it into the second channel; if not, use a phase-reversed balanced cable to achieve the same result. As both mics are effectively in the same physical place and facing the same way, they should be receiving the same acoustic signal. However, the use of phase reverse inverts one of the mics' outputs, so when (and if) the two signals are identical they should cancel each other out. We will be listening for how well that is achieved. A perfect match gives zero output!

Let's begin by assessing sensitivity. Have the assistant talk directly on-axis to the mics from two feet, with a constant voice level. It is often useful to give the assistant something to read to avoid the problem of running out of things to say — a handy copy of SOS is a good source, and guaranteed to keep the reader's interest!

Fade up the first mic channel to its nominal unity gain mark and set the input gain so that the voice peaks well up the scale. Listen to the sound quality and check that all is as you would expect. Then close the first mic fader, open up the second mic to the unity gain mark and adjust its channel gain to get roughly the same output level. Again, listen to the sound quality of this second mic and make sure it sounds as expected — exactly like the first mic, in fact. If it doesn't, you can save yourself the bother of going through the rest of this process!

Now, fade up both mics together. The phase reversal in the second channel means that the the two signals should cancel each other out when their levels are identical, so fine-tune the gain of the second mic channel to get the deepest-level null (or silence) you can. If the mics are well matched for sensitivity, the gain controls for the two channels should end up in the same places.

Assuming the null is deep (the voice level should drop by well over 20dB compared to the level with a single channel faded up) and the resulting sound is tonally flat, we can go on to check the matching of the polar pattern.

Take the phase reverse out of the second channel and pan the two mic channels hard left and hard right. With your assistant still reading aloud from the pages of SOS directly on-axis to the two mics, you should have a well-defined central image from your monitoring loudspeakers (don't try this with headphones — you won't be able to judge imaging errors sufficiently well). If you are lucky enough to have a vectorscope meter or a twin-needle PPM you will be able to confirm visually that the two channels are identical in level.

Next, ask your assistant to walk in a perfect circle around the two mics, maintaining the monologue as he or she walks and keeping the same distance between his or her mouth and the two mics.

If the mics have directional polar patterns the overall level will obviously fall as the assistant moves around towards the rear null (or nulls, in the case of hypercardioid mics). However, the thing to listen out for is that both mics should behave identically — especially over an angle of about ±60 degrees relative to the frontal on-axis position.

If the polar patterns aren't matched perfectly, you will hear the sound image of your assistant pull to the left or right of centre — the direction will depend on which mic is the more sensitive at that particular angle of incidence. On twin-needle PPMs you will also see the two needles separate, and on a vectorscope you will see the narrow vertical line start to lean over to one side or the other. If you become aware of any image shifts or instability while performing this test, the two mics are not matched closely enough for accurate coincident stereo work.

The accuracy of matching between two examples of a single make and model of mic is essentially determined by the manufacturing tolerance of that particular model, as well as any ageing effects if comparing old and new models. The term 'manufacturing tolerance' refers to the degree of deviation from a defined norm for each model that the manufacturer will accept when testing and inspecting the mic prior to shipping.

One of the things that you're paying for when you buy a high-end microphone is a very tight manufacturing tolerance. I've performed the above tests on various Sennheiser MKH-series mics that I acquired from different sources, as well as on pairs of Neumann KM184s bought at different times, and all have demonstrated superb matching. Likewise, Schoeps mics seem to be built to amazingly tight tolerances.

At the budget end of the market, manufacturing tolerances tend to be far wider so that fewer mics fail the test and therefore production costs are lower, resulting in a lower sale price. Therefore, there tends to be a degree of luck involved in finding two mics which are closely matched if you buy them at different times from different batches. At this end of the market, the manufacturers often supply dedicated matched pairs for stereo applications, where they have taken the trouble to select reasonably closely matched examples at the factory, and if you want a cheap stereo pair, this is probably the best way to acquire one.

For the sake of completeness, when recording in stereo with a spaced pair arrangement (usually involving omnidirectional mics), timing differences between the channels are captured, as well as the (smaller) amplitude differences which coincident recording relies on. Consequently the accuracy of polar pattern and frequency response matching is, arguably, less critical.

Realistically, how seriously you need to consider these issues will depend on the demands of the situation and your personal standards — you could say that you need to discover your own tolerance level! An experienced ear will be able to hear imaging problems stemming from poorly matched mics in coincident arrays in a recording of, say, an orchestra or unaccompanied choir. But if you are recording a group of backing vocalists to form part of a heavy rock song, you probably won't require the same level of precision!