Q. How can I use the drum sounds on my Novation KS4 synth? 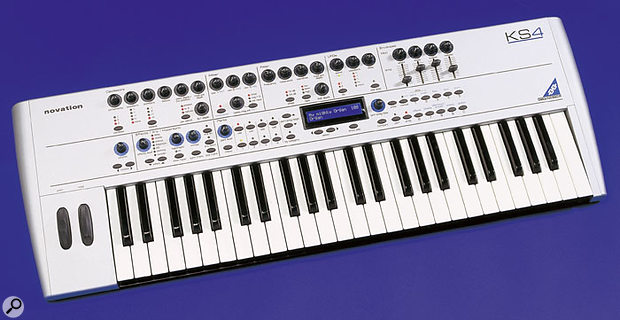 You can use an external sequencer to program drum patterns using the Novation KS4's drum sounds.

I have just purchased the new Novation KS4 keyboard and unfortunately I'm having problems with the drum maps. I want to have a complete drum kit playing in performance mode but there's nothing in the manual explaining how to do this! Can you program full kits to sound like the keyboard demo or must you use an external sequencer? At the moment, I can only play one-shot drum samples. I do have a Korg Karma and could use its sequencer but how would I set this up?

SOS contributor Paul Nagle replies: All the onboard drum samples in the KS4 are of the one-shot variety, so I'm guessing you are looking to put together looping patterns such as those created by the onboard arpeggiator. I believe Novation introduced a number of (preset) arpeggio patterns intended to show off the potential of the kits in the OS 2 update, released just after my review of the KS4 and KS5 in SOS February 2003. However, these arpeggiator patterns are not user-adjustable, so if you want to program drum patterns with the KS4's sounds you'll need to do it from an external sequencer, such as the one in the Korg Karma.

In order to set up the kits, use the KS4's Drum Edit button in conjunction with the drum you want to edit (this automatically selects a patch where that particular drum is 'live' for tweaking). The only real limitation is that each drum in a kit has the same effects settings and output mappings. Each kit has 49 different drums and if you select them in a Performance (patch locations 500, 600, 700 and 800), you could theoretically layer the four kits if you wanted.

To create your own patterns in a similar style to the KS4's presets, you need to identify the drum voices that correspond to each part of the kit you want to use. Then, in your sequencer (the Korg Karma should be fine for this), play in real time or step program the notes you need for, say, a four-bar loop. Now, that's easier said than done, and analysing effective drum loops is an art in itself. You could try something easy at first — techno is a possibility — perhaps by building up a simple thumping bass drum on every beat, then adding a closed hi-hat on the off-beat. Use this as a template and build on it. There have been numerous SOS articles about drum programming that will assist you — the four-part series on this subject which ran from February to May 1998 springs to mind, and all the relevant articles are available on-line. And don't forget that the Karma's own arpeggiator is an awesome source of drum patterns that you could use to trigger the KS4. I'd definitely investigate that angle if I were you.