Q. How do I keep vocals sounding natural when using Auto-Tune? 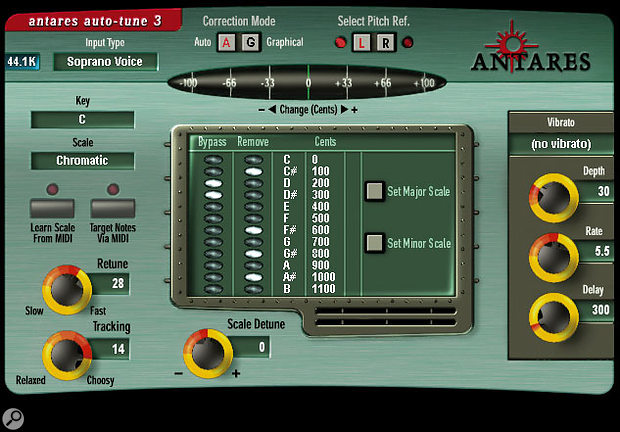 I've recently started using the Antares Auto-Tune plug-in (version 3), and I need help! I used it recently on a male vocal that needed tuning. Even when using the plug-in's Automatic mode, I can't get a good sound out of it — the corrected voice sounds 'warbly' and fake. Can you offer any advice?

Editor In Chief Paul White replies: Auto-Tune is designed to address the problem of vocal pitching imperfections, though I've also used it successfully on other instruments, including electric guitar solos and fretless basses. It is important to note that it can only handle monophonic sources, so if it sees complex mixed material, or sounds that have been treated with delay or reverb, it will tend to pass those sounds through untreated. This means if you have a vocal track with a lot of spill from other sources, Auto-Tune may refuse to work properly. On the plus side, it means you can treat a messy guitar solo that includes double notes or partial chords and they will all be ignored, leaving Auto-Tune to do its job only on single sustained notes.

The plug-in works by detecting the pitch of the incoming material in real time. Auto-Tune then uses a pitch-shifting algorithm to adjust the pitch of the input to the nearest note in a preset or user-definable scale. You can also leave Auto-Tune set to a chromatic scale, but I've found that this rarely works perfectly, especially if the singer uses a lot of bends or vibrato, as you can end up creating trills between two adjacent semitones. This could be contributing to the 'warbly' effect you're encountering, so make sure you have set the plug-in to work off the appropriate key and scale type for the melody you're treating.

The secret to making Auto-Tune sound natural is in not trying to make it correct sounds too quickly. There's a control called Retune — it appears as a rotary knob in version 3's GUI and as a slider in earlier versions — which adjusts the rate at which pitch correction takes place. You could think of it as the equivalent of a compressor's Attack control, and it's helpfully labelled with 'fast' and 'slow' at either extreme, although a numerical value is also shown. If you've already experimented with setting this control as fast as it will go, you'll have heard the familiar pitch-quantising effect that's been done to death on countless records since Cher's single 'Believe'. Setting a longer correction rate — move the knob/slider to its halfway point or below — allows a singer's natural bends, scoops and vibrato to pass through without obvious modification. Whenever they sustain a note, however, it will be pulled smoothly into pitch.

The Tracking control determines how Auto-Tune responds to low levels of spill. Again, it's intuitively labelled with 'relaxed' at one extreme and 'choosy' at the other. In most cases where the input signal is fairly clean, the default setting of around three-quarters of the way up should be fine.

By using Auto-Tune on a clean, untreated vocal take, and adjusting the Retune control carefully, starting from the 'slow' end of the scale, you should be able to achieve transparent pitch correction.

The plug-in's Graphic mode allows far more detailed correction of the individual notes of a take, and is certainly not for beginners. I'd suggest that you get the hang of using Auto-Tune in Automatic mode before you get stuck into its more advanced features. If you haven't already done so, I recommend reading the Vocal Fixes article in SOS October 2003, which gives a fascinating insight into the ingenious ways that Auto-Tune is being used at the cutting edge of commercial record prodution.

I've yet to find a natural-sounding use for the vibrato section of Auto-Tune, as it sounds too mechanical and synth-like for my taste, but it may be useful as a special effect.

Finally, Auto-Tune and its contemporaries only sound really good when the singer you are working on has reasonable pitching in the first place. It is designed to correct errors of pitching, not entirely wrong notes, so there will be some vocalists, me included, for whom there is no salvation!

Will Gregory: My Favourite Synths
3 days 18 hours ago.