Q. How could I get the most from a Korg Monotron? Skip to main content

Q. How could I get the most from a Korg Monotron?

I have a fairly basic setup that I've so far been using for some simple audio work. However, I'd like to introduce some more interesting sounds and thought that a Korg Monotron might be an inexpensive way to start experimenting. However, being a beginner, I'm not entirely sure of the extent of the Monotron's capabilities. How could I get the most from it? Do you have any interesting tips or tricks?

SOS contributor Paul Nagle replies: OK, without knowing about your setup I'll opt for a generic sort of reply. As you know, the Monotron is a tiny synthesizer with just five knobs and a short ribbon. Its strength is in having genuine analogue sound generation rather than massive versatility or playability. But, in my opinion, it possesses that 'certain something' that stands out in a recording.

Being old and hairy, I use mine primarily for the kind of weebly sound effects heard on Hawkwind or Klaus Schulze albums. Add a dash of spring reverb for atmosphere and its electronic tones get closer to my EMS Synthi than a pile of posh digital synths! Through studio monitors (or a large PA), the bass end is quite impressive and the filter screams like a possessed kettle, its resonance breaking up in that distinctive 'Korg MS' way. On stage or in the studio, I'd always recommend extra distortion, courtesy of as many guitar pedals as you can get your hands on. 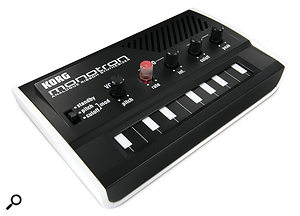 Though the Monotron looks like a simple piece of kit, it has surprising potential when used in inventive ways. 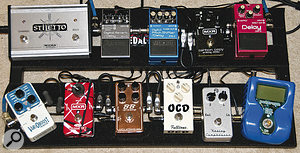 An easy way to experiment with the sounds available from your Korg Monotron is to pile on the effects with different guitar pedals.

But let's not get too carried away. We're still talking about a basic monophonic synthesizer with an on/off envelope and just one waveform (a sawtooth). If it's tunes you're hoping for, that's going to take some work, and preferably external help, such as a sampler. Personally, I ignore the keyboard markings on the ribbon, finding the correct pitch entirely by ear. The ribbon's range is only slightly above one octave, so to squeeze out a fraction more, turn the tiny screw at the rear as far as it will go. On my Monotron, this gives a range of about an octave and a half: roughly comparable to your typical X‑Factor contestant.

As with X‑Factor contestants, there's no universally adopted gripping technique, but I mostly sweep the pitch with my right thumb whilst adjusting the knobs with my left hand. I also find a Nintendo DS stylus works fairly well for melodies, à la the Stylophone.

When your thumb gets tired, you should try the Monotron's second trick: being an audio processor. In a typical loop‑harvesting session, I'll run a few drum loops through it while playing with the filter cutoff and resonance. Once I've recorded a chunk of that, I go back through the results, slicing out shorter loops that contain something appealing, discarding the rest. Often when the filter is on the edge of oscillation, or is modulated by the LFO cranked to near maximum speed, loops acquire that broken, lo‑fi quality that magically enhances plush modern mixes (I expect that this effect is due to our ears becoming acclimatised to sanitised filter sweeps and in‑the‑box perfection). This is a fun (and cheap) way to compile an array of unique loops to grace any song, and you can process other signals too, of course. The results can get a little noisy, though, so you will need to address that, perhaps with additional filtering, EQ or gating. Alternatively, you can make a feature of the hiss, using some tasteful reverb or more distortion.

I have a pal who takes his Monotron into the park with a pocket solid‑state multitracker and acoustic guitar – the joys of battery power! When multitracking in the studio, you might be skilled enough to eventually achieve tracks like those seen on YouTube. Or, if you have a sampler (hardware or computer‑based), and take the time to sample many individual notes, the Monotron can spawn a polyphonic beast that sends expensive modelled analogues scurrying into the undergrowth. Some of the dirty filter noises, when transposed down a few octaves, can be unsettlingly strange and powerful.

I don't know if your setup includes digital audio workstation software, but if so, its built‑in effects and editing can do marvellous tricks with even the simplest analogue synthesizer. Later down the line, you will discover more sophisticated programs — such as Ableton Live and its Lite versions — offering mind‑boggling ways to warp audio, shunting pitch and timing around with a freedom I'd have killed for when I started out.

Anyone handy with a soldering iron should check out the raft of mods kicking around: Google 'Monotron mods' to see what I mean. Lastly, if the Monotron is your first real analogue synth, beware: it might be the inexpensive start to a long and hopeless addiction. Oh, and my final tip is very predictable to any who know me: delay, delay and more delay.

For a full review of the Korg Monotron go to /sos/aug10/articles/korg‑monotron.htm.