Q. How do I get the best from guitar-amp simulator software?

Due to space and other limitations, I am not able to mic up my amp, so I'm going to have to rely on plug-ins for my guitar recordings, but I'm worried about how close I can really get to the sound of my amped-up guitar using this method. What do you think is the best amp-sim plug-in for guitar? And what can I do to make the sound better or more realistic? Is this a fairly common practice with DAWs, or should I be finding a way to mic up a real amplifier?

SOS Reviews Editor Matt Houghton replies: The first thing to say is that yes, use of software amp-modelling in home and professional DAWs is commonplace, and the technology has come a long way in recent years: the sounds you can achieve with one of many commercially available software amp and speaker simulators are really pretty good now. What tops your personal list will be pretty much down to taste. For example, IK Multimedia's Amplitube, Native Instruments' Guitar Rig, Line 6's Pod Farm and Peavey's Revalver III are all capable of great results, but Softube Vintage Amp Room is my favourite software for re-amping work. That's partially due to the amps that are modelled, partly due to the quality of those models, and partly due to the simplicity of the interface, which isn't cluttered with a gazillion effects and preset menus, and offers only three amp models. This means that it's easy to get to know it inside out and back to front, just like you would a real amp. 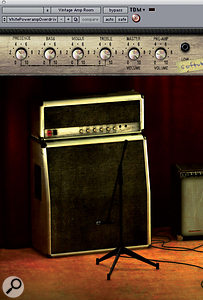 There are some excellent amp sims on the market, such as the Softube Vintage Amp Room, which benefits from the simplicity of its interface.

Whatever your personal preference in terms of sound, though, the key with any of this software is to keep latency as low as possible while playing, and to play it pretty loud over your speakers if you can, just so that you can get some interaction between the speakers and your pickups, as you would with a real amp. It's the 'playability' side of things that concerns me most with much current software, and hardware modellers too: while the sound itself can be great on playback, and is usually perfectly good for re-amping purposes, I find the performance can suffer when you're not playing and monitoring through your amp. To get around this, in part, you can use a basic modelled speaker emulation while tracking — rather than an impulse response, so that the convolution process isn't adding unnecessarily to the latency — and then maybe experiment with speaker impulses later on, to produce a more realistic recorded sound. On the question of latency and playability, remember that you're often standing away from a loud guitar amp, and if you're playing closer to your monitors, that should compensate a little for the latency, simply because the sound reaches your ears that bit sooner than usual. When it comes to impulse responses, when they're played back through a suitable convolution engine (there's one bundled with most DAWs in the guise of a reverb), they can sound very convincing, but do bear in mind that they capture a static response and, therefore, don't offer you control over mic selection and position, and don't respond dynamically to variations in level as a real speaker would.

Notwithstanding this advice, though, I typically only use the software modellers if I have to, as I know I can get better sounds from a real amp. To keep amp recordings quiet in a compact space, there are a few options, which basically revolve around sticking the speaker inside a box to keep the sound down, if that's one of your concerns, which you can do with isolation cabs such as the Hermit Cab. Alternatively, you could put a power soak in between the amp and speaker, so that you can attenuate the signal after it has passed through the amp but before it hits the speaker. If space is at a premium, this might not be the best approach, and while power soaks all allow you to use your amp, most impart plenty of their own coloration to the signal, which may not be to your taste. I much prefer to play through a nice tube-amp head into a power soak (such as the THD Hot Plate or the Sequis Motherload), and while I usually just use this to attenuate the output (so that I can drive the amp harder at sensible recording levels), you can use a power soak to attenuate the signal completely, and run a line output into your DAW. You'll still need something to model the speaker, of course, and some power soaks include a reasonable speaker emulation, or you could, once again, look to impulses such as those from Redwirez. A slightly less complex variation on this theme is to use a high-quality guitar preamp (or take a preamp output feed from your amp if you have one) and run the resulting signal through a dedicated power amp and speaker emulator such as the Two Notes Torpedo VB101 plug-in. Again, it's difficult to say how good you'll find the results from these different approaches. My sense is that if you're comfortable playing through software, and happy with the sound, it's a problem that doesn't need solving. But if you really do want to go in search for the ultimate compact and quiet recording solution for guitar, then I hope I've given some useful pointers!