Q. How do I get more polyphony from Roland D-series synths?

I've recently been considering buying a second-hand Roland D-series workstation to get those classic D50-type sounds, although I haven't decided whether to get a D20, D10 or D5 yet. A while ago I borrowed an old D-series synth from a friend and was using the keyboard in multitimbral mode, hooked up to my computer sequencer, but I seem to remember experiencing some problems with the sounds, and I'd like to get some advice before I shell out any cash. I found that some notes seemed to cut out when I was running a lot of MIDI channels, and I had problems with some sounds randomly getting louder or quieter. Is this because the keyboard was old and faulty, or am I just expecting too much from what is now old technology?

SOS contributor Tom Flint replies: The problems you are having with sounds cutting out are almost certainly down to a lack of polyphony. These days synths are blessed with capability for 64, 128 or even more simultaneous notes, but the good old D-series synths only have 32 notes of polyphony divided between their eight multitimbral parts. 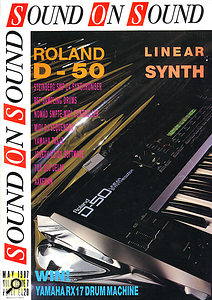 The important thing to know about the D-series variety of synthesis (known as Linear Arithmetic or LA synthesis) is that it allows a sound to be made up of as many as four separate sound elements, named Partials, which are either synth waveforms or PCM samples. Some sounds are created using just one Partial, others require all four, but the more Partials that are used, the more polyphony the sound will consume when played.

Bearing this in mind, steps need to be taken to ensure your compositions are not compromised by a Partial shortage. The first step is to reserve a minimum number of Partials for each of the eight parts, so if, for example, you have a huge lush string sound comprising all four Partials, and played as a chord (holding several notes down at once), you can make sure that the part which plays that sound has the most reserved Partials. On my keyboard, I have one channel permanently set with a reserve of 10 Partials for the most hungry sounds, another channel has five, two are given four, one has three and the rest get by with just two reserved Partials each. Since making this arrangement, I have only had to make sure I am careful when assigning sounds to channels. Single-Partial sounds are played on the channels with just two Partials. Other sounds are assigned according to whether they are single-note lines or chords.

To change the Partial reserve for each channel, press the Tune/Function button and then use the two Display keys to scroll through the menu options. Here you will find level and pan settings for each of the eight Parts and for the rhythm Part, followed by the Partial reserve settings for each Part. The value keys allow you to set the reserve to anything up to 32, although you have to bear in mind that you are always dividing a maximum of 32 Partials between eight Parts.

The second way you can control your keyboard's consumption of polyphony is by editing the sounds, or Tones, as Roland confusingly call them. The D20 had all the essential information you need for editing and programming, such as the Tone banks, editing menus and Partial structures, printed on the top of the keyboard itself. Unfortunately, Roland decided to leave off a little more of this helpful information on the cheaper keyboards in the range, so getting hold of a manual will be advisable if you intend to buy one of these. Select the Part you wish to edit and then press the Edit button to get the Edit Select page. Follow this action by pressing the Upper button, and you can then navigate and edit the various synth parameters using the Display and Value keys. Once in this mode, take a look at the four Partial Mute keys (labelled P1, P2, P3 and P4). The four corresponding LEDs show how many Partials are being used to construct the Tone. By pressing each Partial Mute button, and muting the Partials in various combinations, you can find out if there are any unnecessary Partials used in your chosen Tone. I often end up editing a Tone so that I am using just one of the original Partials, having decided that the essence of what I need is to be found in that particular Partial alone. Naturally, this frees up polyphony very quickly.

You also mention that some of the Tones you've been using suffer from random changes in volume, and there are several possible reasons for this. It is possible that the randomness could be down to a Tone being particularly sensitive to velocity (you can change the velocity sensitivity for each part), but you will be able to diagnose the problem by looping the same passage of music and carefully listening to see whether the same notes are consistently decreasing or increasing in volume.

If, on the other hand, the changes in volume seem irregular or random, it's likely to be caused by the way the Tone has been constructed. Many of the sounds on the D-series synths are programmed with two identical Partials, using slightly different tunings in order to create an artificial, chorus-like 'thickness'. The inherent phasing effect this produces can cause the kind of random volume changes you are experiencing. You can address this problem by carefully adjusting the tuning, panning and levels of the Partials, or muting one or more Partials altogether, paying attention to the way the Partials are combined to modulate each other. You will inevitably lose the 'thick' sound, but will end up with a Tone with a consistent level. Another possible cause of your phasing could be the LFO settings of each Partial going in and out of sync. Once again, its worth experimenting with the editable parameters before resorting to Partial muting, unless you need to slim your sound down anyway.