Q. How can I get rid of clicks and pops from my soundcard? 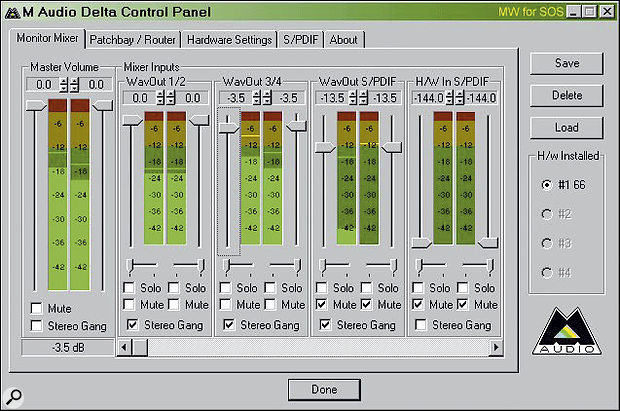 I've recently upgraded to an M-Audio Audiophile 2496 soundcard, and I'm having some problems. Firstly, I cannot change the level of the line input. So if the CD player outputs audio at too high a volume, I get clipping and distortion, no matter where I set the sliders in the Delta control panel applet. I've tried it with three different CD players, and they all appear to be too loud for the card. M-Audio's solution is to either route the CD player through a mixer (which obviously will introduce loads of unwanted noise) or buy a CD player which has some sort of on-board volume level control. 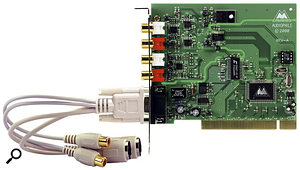 M-Audio's Audiophile 2496 soundcard and, above, its software control panel.Secondly, I get the dreaded 'clicks and pops' when recording. I've done everything I can think of to eliminate these — upgraded the BIOS, upgraded all drivers (the soundcard itself, display adaptor, motherboard and so on), sorted out the IRQ conflicts, I've tried the card in all four PCI slots as well, and still I get loads of pops and clicks when recording, or playing audio from a CD or DVD, and to a lesser extent when playing back audio from applications.

I have been told by various people that the card may not work correctly with ACPI machines. They suggested re-installing Windows 2000 in Standard PC mode, which I'm not prepared to do, and couldn't in any case, as I didn't get any Windows 2000 discs with the machine.

So, can you tell me if I'm doing anything wrong here? I don't want to have to spend money on a new CD player, then a copy of Windows 2000, then re-install my OS just to get the thing working. My next step is to send the card back and exchange it for a different one — one that works, hopefully!

PC music specialist Martin Walker replies: There are quite a few issues involved in your current predicament, so let me deal with them one by one. Soundcard line-level inputs usually have a fixed sensitivity, so you do need to adjust incoming analogue signal levels at the source, as M-Audio suggest. Only soundcards featuring additional mic or guitar inputs generally provide analogue level controls.

Line-level sensitivity is either set at -10dBV, suitable for the majority of line-level consumer sources such as MIDI synthesizers, or is switchable to a less sensitive +4dBu setting to deal with professional audio gear. However, M-Audio's Audiophile 2496 is slightly different from most, since its outputs can be switched to either -10dBV or a higher level labelled 'consumer' that provides a maximum output level of +2dBV. The inputs on this model are fixed at the same 'consumer' level, which mean that they too accept a maximum input level of +2dBV.

The sliders in M-Audio's Control Panel applet operate (like nearly all software level controls ) in the digital domain, in other words, after the signal has passed through the A-D converters and been converted into a digital signal, and cannot therefore be used to set recording levels. Instead, they are primarily intended to create a monitor mix from several input and playback signals. In fact it's important to leave these controls at maximum (0dB) other than during monitoring duties, since otherwise you'll be throwing away digital resolution.

Quite a few stand-alone hi-fi CD players are renowned for putting out a 'hot' signal, which is sometimes even enough to cause harshness when connected to the CD inputs of typical hi-fi amps, especially when playing audio CDs whose peak digital levels are close to the maximum 0dBFS.

If you had a +4dBu input sensitivity option on your soundcard this might just be enough to avoid the distortion you're currently experiencing (some other budget soundcards, such as Terratec's EWX24/96, do provide this option), but you still wouldn't be able to tweak the input sensitivity to optimise the recording level. You could solder up a simple output level control for your CD player using a potentiometer and some screened cable, but there's a far easier approach available to you.

The vast majority of musicians with a PC now record tracks from Red Book audio CDs by a far simpler method — by using the Windows 'digital CD audio' option with their PC's CD-ROM drive. This digitally extracts ('rips') the CD audio without passing it through any A-D converters, which ensures optimum audio quality. Its tick box is normally activated by default, but you can check by looking in the Properties page for your PC's CD drive in Device Manager.

As for ACPI versus Standard Mode, quite a few older M-Audio cards seem to prefer the latter, particularly it seems with Windows 2000, where it has been known to completely cure otherwise ineliminable clicks and pops, and even enable lower soundcard buffer sizes to be used, for lower latency. I discussed this back in SOS March 2002, and until recently many PCs from specialist music retailers installed Windows in Standard mode for this reason.

On the other hand, Windows XP seems far happier when running in ACPI mode, even with M-Audio soundcards, and since this also enables other technologies like APIC (for more interrupts) and hyperthreading to be used, most XP users should stay in this mode.

Although you don't have your Windows 2000 CD-ROM, as this OS is already installed on your PC you could perhaps legitimately borrow one and use it to install Standard Mode, since there's a good chance that this could be the easiest way to solve your current problems. Installing Windows XP should also do the trick, although this approach obviously involves a lot more effort and expense. However, if you can still exchange your soundcard for another model, this could also be a possible solution.