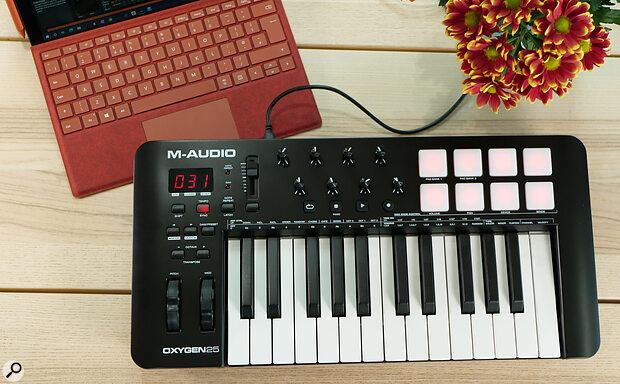 It often feels like these M‑Audio Oxygen MIDI Controllers have been around forever. The Oxygen 25 MkV that I have before me definitely has shades of the original MIDIMAN Oxygen8 that first arrived in 2002. They were chunky then and they’re chunky now. These are not the stylish controllers that you’d be too scared to take out of your Instagram‑curated studio space, no, these are the chunky controllers that get pulled out of rucksacks at Electronic Music Open Mic Nights covered in stickers and graffiti with probably a bit of gaffer tape to keep the sides on. It’s quite reassuring that M‑Audio haven’t gone down the elegance route of so many of their competitors and instead are keeping it real with substantial plastic shells that feel like they’re going to survive a chaotic live environment.

The look and the layout of this new version is pretty much identical to the MkIV: same eight knobs, same eight pads, single fader, mod/pitch wheels, three‑digit LCD display. They’ve pulled off all the red accents, turned the grey buttons to black and generally darkened the whole vibe and left all the markings as white. The knobs are still nice and tall and as wobbly as you’d expect from an entry‑level controller. However, the knobs themselves feel much better than the MkIV, with a definite white indicator on a shiny cap which protrudes from the edge of the knob so you can detect the position with your fingers.

The keyboard feels good, there’s no aftertouch or weighting, it’s just a good clean synth action that doesn’t make too much noise or feel clunky. The black keys are textured in a slightly matte finish and so are less grippy on the fingers than shiny keys. The velocity response is just fine with a number of different velocity curves or set velocities to choose from. It is a decent playing experience that I would probably be able to say more about on the 49‑ or 61‑keyed version.

What is different from the MkIV is all the extra white text above the keys. These refer to the three new creative modes that M‑Audio have built into the Oxygen MkV. These are features borrowed from the Oxygen Pro range and are found on most MIDI controllers these days. So, to keep these keyboards competitive it was definitely the right thing to do.

The three modes are Arpeggiator, Chord and Scale with a Note Repeat function thrown in for good measure on the pads. M‑Audio haven’t added any extra buttons or data sliders to deal with the functionality like they have on the Pro versions, no, for this it’s all down to the Shift key and the white text above the keyboard. You select modes by holding Shift and using the Preset Select left/right buttons and a little red dot appears in the display to show the current mode.

The Arpeggiator has all the usual note order modes and a chord mode and a range that expands your held notes up to 2 octaves. There are also controls for Gate length, Time Division and amount of Swing. There are actually two Arp modes, one that latches and one that doesn’t. There is a Latch button sitting there looking at you but apparently this only refers to the Note Repeat. Once you’re in the Latched mode you can only stop it playing by switching into the non‑latched mode or hitting the Panic button. It’s a small but annoying workflow feature that a straightforward latching ‘Hold/Latch’ button would resolve.

Smart Chord mode lets you play chords on a single key. You can set the musical key, voicing and type of chord you wish to play. You have seven different voicing choices plus a random one which is rather fun. For chord type you just get Major and Minor but there is a Custom option where you play a chord of up to six notes and it will use that as the chord, although it won’t remember it for next time.

Smart Scale lets you play in a chosen scale so that you never hit the wrong note. You can use the same Key options as Chord mode but now you get a few extra Types including Pentatonic and Harmonic, Dorian and Blues.

All these modes work perfectly well, and they are very welcome things to have in your MIDI controller. However, the Shift+Keyboard workflow is never the greatest way of accessing parameters. Sometimes you want to hold some notes or play while making changes and that’s difficult to do, particularly on a very small keyboard where every key has a Shifted function. Some of the options have multiple values which can only be accessed by repeatedly hitting the key to step through them. So, while it’s perfectly functional it doesn’t offer much in the way of control during a performance. One exception is the Arp Time Division control which can be accessed by holding Note Repeat and using the Preset Left/Right buttons — that at least is a useful thing to be able to change while holding down notes.

I should mention Note Repeat which is a function that enables the pads to do a roll when held. You can either enable it momentarily or engage it with a latch just like the Arp should be able to but doesn’t. The Preset Left/Right buttons let you step through various time divisions so you can change the roll on‑the‑fly.

Round the back things are as simple as you’d expect, with just a USB type B port, a sustain pedal socket and a power on/off switch.

The word Auto‑Mapping means something different to me than it does to M‑Audio. I absolutely assumed that the controls on the Oxygen 25 would map themselves automatically to whatever virtual instrument or effect plug‑in I had loaded. Auto‑Mapping has tended to refer to that overlay system that Novation had, or the Nektarine software system from Nektar, or I thought it might be along the lines of the Akai VIP software that provides a way of saving mapping to instruments within a plug‑in wrapper. Sadly not. In this case Auto‑Mapping refers to good old Mackie/HUI transport and mixer mapping that we’ve been using for hundreds of years on all MIDI controllers that have ever possessed some sort of transport controls. I was genuinely intrigued and genuinely disappointed.

However, the Oxygen 25 has DAW control and they’ve done a decent job of making it all work within the confines of this MIDI controller while letting you map yourself manually to plug‑ins at the same time. They make this happen by using a couple of individual MIDI drivers. You have one driver that’s for your regular keyboard and MIDI control shenanigans and another that you set up the Mackie DAW control with. The Oxygen 25 has some internal DAW presets that ensure the smoothest possible control experience and you’re good to go. There’s a button to switch between DAW control and MIDI control (that they call ‘Preset’) and an LED comes on to show you when DAW control is active.

On the larger versions of this keyboard you’ve got a bank of faders for mixer control but on the Oxygen 25 you just get the one. This solitary fader will control the level of whatever channel you have selected or the master level depending on your DAW. Otherwise, the eight knobs step up to be the volume and pan on your first eight channels. You can jump to other banks of eight with the Preset Left/Right buttons. The knob functionality is selected by holding Shift and hitting the pad with the relevant choice written underneath. Holding the Shift key will tell you which is currently selected by illuminating the pad. Two of the options ‘Device’ and ‘Sends’ appear to be reserved for Ableton Live use only.

To make the mapping feel a little bit more ‘Auto’ you can edit the control numbers of all the knobs to match various instruments and save them as presets. Unfortunately, at the time of writing the Preset Editor software wasn’t available but M‑Audio have already set up a number of presets to work with the included virtual instruments.

These are not the stylish controllers that you’d be too scared to take out of your Instagram‑curated studio space, no, these are the chunky controllers that get pulled out of rucksacks at Electronic Music Open Mic Nights covered in stickers and graffiti with probably a bit of gaffer tape to keep the sides on.

The MkV is a decent upgrade to the solid Oxygen range of keyboards but does nothing to change the game. All the new features are great but they are already present on several alternative keyboards and even my workflow criticisms are the same on many other compact controllers that use the Shift + Keyboard functionality. There’s certainly nothing wrong with it, the hardware is good, the feel of the keyboard and pads is great for this price and the physicality remains satisfyingly chunky. There’s no MIDI output port but there is a power switch, which is a huge bonus in my book. So a decent job, well done.

The bundle of software is a little on the light side. Usually M‑Audio products come with a big bundle of instruments from their family of InMusic products but this time you get MPC Beats with some sound packs, Ableton Live Lite, the MiniGrand and Hybrid 3. The manual says it has presets for many more but they are not actually included. However, once you’ve jumped through the registration, software manager download, install and iLok activation hoops you do get a couple of half decent things to play with.

The Oxygen 25 is a solid choice for the less careful or less style‑conscious mobile musician that’s going to survive a hectic live performance while also offering useful tools and easy control of your studio.