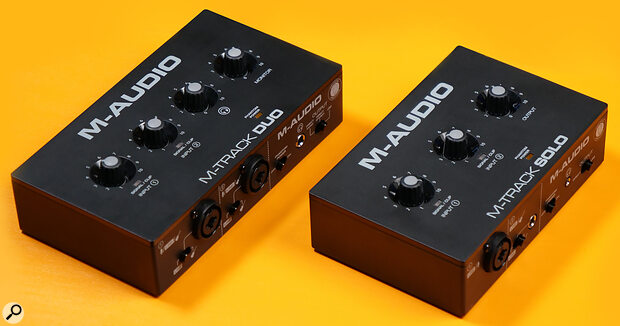 Can you really buy a useful audio interface for £39$49?

Here we go, another pair of budget‑end audio interfaces that look as familiar as nearly all audio interfaces do. My first impression is one of incredible lightness; these hardly weigh anything. I frown a little at these lightweight plastic boxes and then check the press release for the pricing. Right, £39.99$49 for the Solo and £49.99$69 for the Duo; that puts a rather different perspective on things.

These remarkably priced audio interfaces are unsurprisingly made of plastic. Although they are very light in comparison to more expensive interfaces of similar function, they’re not flimsy and they have reasonably sticky feet to help keep them on the desk when being pulled about by cables. The build quality is not fabulous, but at these prices you think, yep, they’re OK. However, with an XLR cable and guitar cable plugged into the front and trailing onto the floor they do lift the back two feet off the desk. So, can these very affordable interfaces offer decent enough home recording quality or are they too cheap and too compromised?

I’ve been handling, installing and comparing audio interfaces for many years and, in my experience, you usually need to spend about £100$150 to get something decent. By ‘decent’ I mean survivable build quality, solid connections, useful controls and usable low‑latency performance. The entry‑level interfaces from Native Instruments and PreSonus have crept down to around the 80 quid$100 mark and still tick all the boxes, but these M‑Audio ones are half that price. And while I’m not particularly eager to focus too much on price when doing a review, I think it’s inevitable in this case.

The M-Track Solo and M-Track Duo are 16‑bit audio interfaces that can run up to 48kHz. They offer a frequency response of 20Hz to 20kHz with a signal‑to‑noise ratio of 109dB. The gain range on the microphone input is 0 to 54 dB and ‑10 dB to 44dB on the line and instrument input.

With inputs on the front panels, the Solo and Duo’s back panels are simple affairs, with just the audio outputs and USB ports.The Solo has two inputs: mic/line and instrument/line, mini‑jack headphones and RCA outputs. The Duo also has two inputs, but both can be mic, line or instrument. The outputs on the back and headphones have been upgraded to quarter‑inch jack, and it has a separate headphone and monitor volume control; the Solo just has a single output level control. Both have phantom power, switchable direct monitoring and are powered by a very weedy USB cable.

Neither has any LED indication that they are on. However, you do get a signal/clip LED on both channels and a phantom power indicator.

The knobs are on the top, which is where I like them to be with a desktop audio interface. They are recessed slightly, which might give them some protection from accidental damage and while the turning is nice and firm there’s a lot of sideways movement in them.

The thing that tends to be most lacking in cut‑price audio interfaces is the drivers. Class‑compliant drivers are fine for general sounds and music on Windows and great for Apple products. However, to hit a playable latency level for monitoring and the live playing of VST instruments Windows needs proper ASIO drivers. I wasn’t expecting much from the M‑Audio boxes, and I was pleasantly surprised that they came with ASIO drivers, and good ones at that.

When running plug‑in load tests at various latencies against the recently reviewed MOTU M2, the Solo and Duo’s performance were more than a match. Although I’m slightly sceptical of the reported 16‑samples buffer size, the output latency could get down to 2.8ms with a round‑trip of just under 6ms. The best balanced performance could be found at around the 128 samples mark, giving 5.4ms output and just under 9ms round‑trip. That’s very respectable and unnoticeably playable to my ears.

Recording and monitoring were also good at 128 samples. M‑Audio highlights the use of Crystal preamps on the microphone inputs and they sound OK to me. Comparing them to the MOTU the difference was small, particularly on vocals where the Crystal preamp was doing a fine job. Using the second input for guitar there was a noticeable difference in sparkle and range, but at no point did it sound inadequate.

I’d have no reservations in recommending the M-Track Solo or M-Track Duo to anyone stepping into the world of recording for the first time.

Within the asking price you get a decent bundle of software that’s probably worth more than the price of the box itself. You get Pro Tools First and MPC Beats, which can undoubtedly get you recording, plus 20 effects for Pro Tools including guitar effects, delays and reverbs. They’ve also thrown in the guitar amp plug‑in Eleven Lite. For virtual instrument sounds you get the AIR Xpand! 2 workstation, which looks a bit dated but does come with an extensive range of useful sounds.

There’s no catch, no deficiency or gaping hole to draw attention to. I can list things that they don’t have like a MIDI interface, multiple outputs, mixer application, loopback function and power light, but for the price what they do have is perfectly adequate for budget home recording. They are only 16‑bit and 48kHz, but who cares about that at this level?

The sound quality is fine, the driver performance is really quite good, and while they are lightweight, they are not particularly breakable. Besides, at this price you could get another as a spare. Spend more and you will get better hardware, features and sound quality, but I’d have no reservations in recommending the M-Track Solo or M-Track Duo to anyone stepping into the world of recording for the first time. Match it up with M‑Audio’s Keystation Mini 32 controller keyboard, and you’ve got a recording studio for under 100 quidjust over $100.

The Solo and Duo are ridiculously cheap audio interfaces for the home studio that are easy to use and do the job of interfaces twice the price.