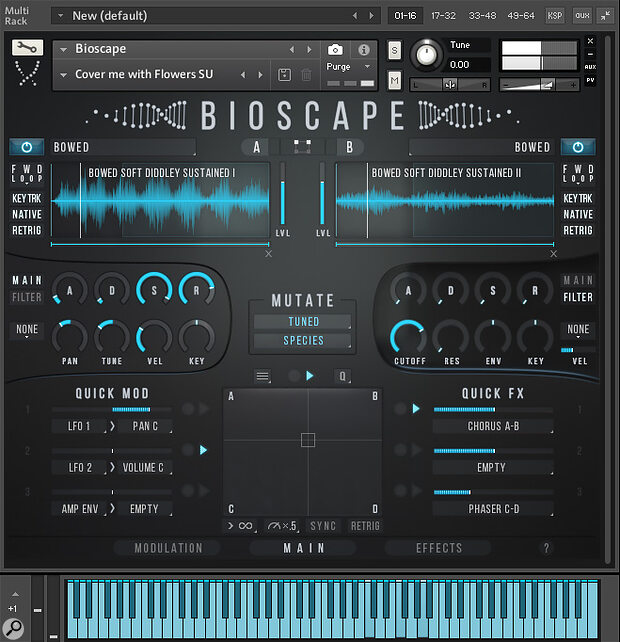 Luftrum offer some found sounds as a cure for lost inspiration.

Aimed primarily at media composers, there are now a good number of Kontakt‑based virtual instruments that are built upon the concept of blending multiple samples. Luftrum’s Lunaris (reviewed in SOS November 2017 issue) is one such example, allowing the user to blend up to four sample‑based sound sources to create some fabulous evolving pad‑style sounds. With composers always looking for fresh sonic inspiration, Luftrum’s latest offering in this field, Bioscape, may well appeal.

Bioscape combines a 4.5GB sample library and a Kontakt front end that allows you to blend up to four of the underlying sounds (the sound slots are labelled A to D and arranged as two pairs), while also applying powerful sound‑shaping and modulation options. Interestingly, Bioscape’s underlying sample base is built almost entirely from field recordings and ‘found sound’. So, if you like the idea of building musical sounds from cactus needles played with a bow, fluttering bird’s wings, radio static, ice melting in a bottle, waterfalls, cityscapes, steampunk equipment or wind vibrating anything from leaves to wind harps, then Bioscape might well appeal. 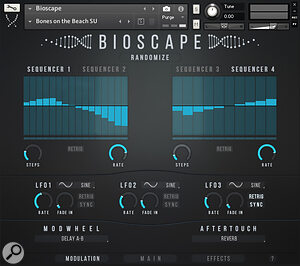 The Modulation options are both easy to use and very creative.The UI feels pretty sleek and (mostly!) intuitive. Indeed, while it shares some underlying features with Lunaris, I think Bioscape’s take of the front‑end is a cleaner and clearer one. The core controls are split across three main screens — Modulation, Main and Effects — and you can switch between these using the tab buttons located towards the base of the UI. I’ll come back to the Main screen in a minute, but the Modulation page offers four sequencers, three LFOs and both Mod Wheel and Aftertouch options, that can be used to bring movement to your sounds and are very easy to use. The Effects options include chorus, phaser, distortion, EQ, delay and a ‘timestop’ effect (sets the speed of sample playback within each sample slot), all of which can have separate configurations for sound slots pairs AB and CD. There is also a global reverb.

Once you have exhausted the possibilities of the underlying sample base (which will take some time), rather wonderfully, you can also drag and drop your own samples into any of Bioscape’s sound slots. This capitalises on new elements of the Kontakt 6.2 (and higher) specification but it’s a significant inclusion. In use, dragging and dropping samples from my desktop file browser worked a treat but, on my Cubase Pro/OS X system at least, I couldn’t drop samples from within Cubase itself. It’s also worth noting that, if importing rhythmic samples (such as percussion loops), Bioscape doesn’t automatically tempo‑match samples to your project so you would need to do that yourself before importing. Still, I’ll happily take what I can get; sample drag and drop opens up all sorts of sound design possibilities using the Bioscape engine. 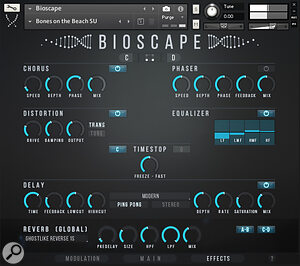 The Main page is where the samples within the four sound slots can be blended. The upper half of the display can be toggled between showing controls for either sounds slots A and B or C and D. You get independent ADSR sets for the amplitude and filter envelopes for each sound slot as well as pan, tuning, velocity and keytracking options in each case. In the mini‑waveform displays you can choose between different playback options (normal, reverse, looped, etc) and also define the playback starting point and loop region. This was perhaps the only bit of the UI I found initially a bit confusing and the PDF manual could perhaps do with a more comprehensive explanation of these particular functions.

There are some cool features here. Bottom centre of the screen is the XY pad and, as in similar ‘sound blending’ virtual instruments, this allows you to change the blend between the four sound slots. This can be done under manual control but also by recording (automating) the ‘motion’ of the cursor. This allows you add lots of extended evolution to things like pad or texture sounds. However, as well as recording the motion within the XY pad, you can also record motion for the three ‘Quick Modulation’ and three ‘Quick Effects’ controls located either side of the XY pad. The targets of the motion are user configurable and this element of the UI is super‑easy to use when you want to add some further motion to your sounds.

Immediately above the XY pad is the Mutate panel. Luftrum refer to this as ‘DNA mutation’ and you can pick two different types of mutation that will essentially transform the existing preset to create a variant of it. While the labels are quite fun — add a little Dark Carbon or Frozen Lifeform to your sound — it is essentially a means to subtly randomise the properties of your patch. No, not all mutation experiments will be successful but, when you are simply looking for sonic inspiration, it’s nice to have the option. And, providing you save your patch as a Kontakt Snapshot first, you can undo your mutations by emptying the two slots.

Given the design of the UI and the sound design features on offer, Bioscape is more than capable of holding its own against some of the obvious (and pricier) competition.

The Sound Of The Bioscape

So how does Bioscape sound? Well, really very good indeed. The impressive 300+ presets (with more on the way in a forthcoming update apparently, along with the ability to re‑size the UI) have plenty to offer. Using the Kontakt Snapshot system, they are divided into themed categories including Dronescapes, Effects, Pads, Pulses, Textures, Playables and an ASMR (autonomous sensory meridian response) section that will appeal to those creating relaxation and/or meditation soundscapes. For more conventional composing tasks, there are some beautiful — and very organic sounding — pads, textures and drones. This kind of extended, evolving, sound is definitely one of Bioscape’s strong suits. That said, the presets in these categories go from soothing and subtle to downright dark and scary so you could use the instrument in a wide range of musical contexts.

It’s not all pads, though; the Playables category also shows that Bioscape is perfectly capable of providing melodic elements to your compositions. The Pulses category Snapshots make good use of the modulation options (especially the step sequencer) so that you can add rhythmic elements that sync to your project. Finally, the Effects category gets you into sound effects design territory and has some great sounds for your next sci‑fi or horror score.

Whether the novelty of the field recordings as a sample base is enough to suck you in, given the design of the UI and the sound design features on offer, Bioscape is more than capable of holding its own against some of the obvious (and pricier) competition. It sounds great, it’s easy to use and it’s also very competitively priced. It perhaps won’t appeal to every music maker, but for those involved in scoring to picture, Bioscape is well worth auditioning.