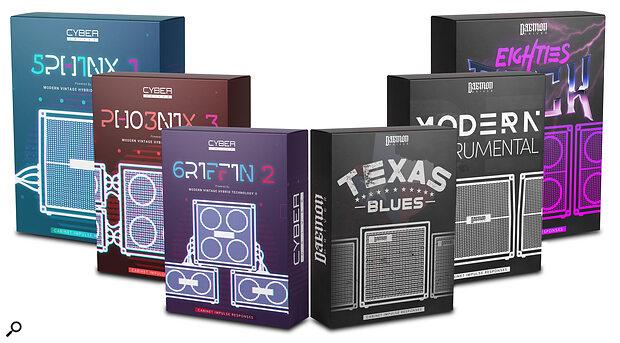 It takes a hell of a lot of prep and expertise to create the perfect cabinet IR library...

I don’t normally get excited about cabinet impulse responses in the way I might the latest piece of audio hardware, but when a highly‑respected, UK‑based guitar tuition website launches two IR series, with a combined total of 930 impulse responses, it’s going to get my attention. The website in question is Jam Track Central (JTC), whose lessons boast content from an international roster of technically gifted guitarists, and these two distinctly different IR series, Daemon Driver and Cyber Driver, were created, developed and curated by guitarist and music technologist Colin Cartmell using his proprietary Modern Vintage Hybrid Technology (MVHT) approach.

The Daemon Drivers are grouped into 17 genre‑specific IR packs, each with two sets of 10 single‑cabinet IRs (Cab 1 and Cab 2), plus a third Mix set, consisting of an additional 10 ‘mix‑ready’ IRs, EQ’d to be dropped into a mix. The Cyber Drivers comprise five IR collections, named after mythical creatures and grouped by sonic character rather than genre. Each collection is split into three IR packs, each containing two sets of 14 IRs for both Cab 1 and its Phase Cab, of which more later. All captures are presented as 24‑bit WAV files at 44.1, 48 and 96 kHz.

The cabinet, amp and mic chain used to capture individual IRs is common across both series, and forms the basis of the way in which each cabinet is catalogued within all 32 packs. For the Daemon Drivers, captures were made using five different mics and both tube and solid‑state amplification, to create 10 IRs per cabinet. In the case of the Cyber Driver series, the same amplification options were used with seven different microphones, to produce its 14 IRs per cabinet.

Ignoring the multiple sample rates, a quick totting up gives a series total of 510 individual IRs for the Daemon Drivers and 420 for the Cyber Drivers, so a total of 930. To assist potential purchasers in navigating this vast panorama of tone, JTC have created a separate webpage for each pack, with a preview video of a guitarist running through a selection of that pack’s cabs with different mics, plus a more detailed description and a selection of recorded tone examples.

When I first loaded up a selection of Daemon Driver and Cyber Driver IRs, I was pleasantly surprised that I didn’t need the low‑pass EQ I often find I have to apply to third‑party IRs, to adjust their sound to my taste. Another pleasant surprise was a realisation that these IRs had been created to deliver specific tonal targets. Being able to choose between different tonalities — rather than having to search for the most accurate recreation of a specific speaker — felt liberating, though I haven’t yet given up entirely on the searching bit! Whilst auditioning more JTC Tones IRs and exploring all their mic and power amp variations, I realised there was much more going on behind the scenes, and that I needed a better understanding of Colin Cartmell’s MVHT approach. So I called him... 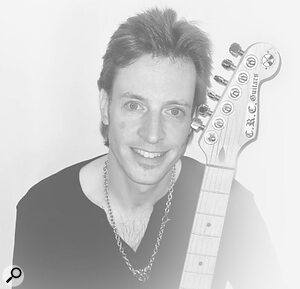 JTC Tones IR creator Colin Cartmell.Photo: courtesy Jam Track CentralAs soon as I started talking to Colin about the JTC Tones IRs, it became blindingly obvious that the man should be honoured as a certified tone hound. He has a very clear idea of what he wants to achieve sound‑wise from guitar loudspeakers, and has the technical chops to turn his vision into reality.

I grew up with tube guitar amps and am accustomed to making modifications; I have a stash of used and NOS tubes that gets added to whenever funds allow. But Colin takes my meagre efforts to a whole other dimension: he has amassed, over the years, a huge collection of vintage paper‑in‑oil capacitors and other components, which he uses to tailor the response of tube power amps to his requirements. Similarly, the microphones that Colin uses to capture IRs aren’t always necessarily typical examples of their type, but can be hybrids that have been created to enhance the sonic signatures of a selection of classic microphones. Created by Colin as part of the development of his MVHT approach, these hybrids were designed to extract the required tonal character from a specific combination of amp and speaker cabinets. 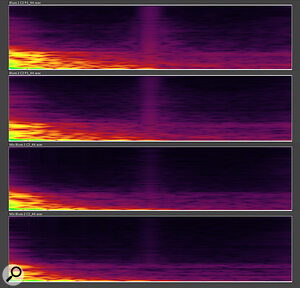 The Blues 1 cab and the Blues 2 cab IRs were captured using the same mic/amp setup (U87/tube power amp). The spectrum shows both the similarities and the differences between the IRs, which do sound distinctly different. An interesting aspect is that the short frequency burst at approximately 19ms is not a room reflection as you might expect, but rather a sonic component of the IR which was deliberately introduced to enhance the high‑end response of the Blues cabs’ IRs. The Mix IR spectra illustrate the EQ differences introduced in order to allow the Blues cab IRs to sit within a mix.Microphone types common to both the Daemon and Cyber Driver series are a 57, based on the ubiquitous Shure SM57; a 57 Off, an off‑axis 57; a C1, a U87‑based large‑diaphragm capacitor; a C2, a more modern C414‑style large‑diaphragm capacitor; and a RBN, a Royer R121‑inspired ribbon. The Cyber Driver range utilises two additional mics: DYN 2, a large‑diaphragm PL20‑type dynamic mic and REAR DYN, a Sennheiser 421‑style dynamic behind the cabinet.

But all this is a relatively small part of the MVHT story, the vast bulk of which must remain untold on the grounds of commercial confidentiality. But our conversation left me in no doubt that the Daemon and Cyber Drivers series are products of Colin Cartmell’s vision of how cabinets should sound and feel, and his desire to give other guitarists the opportunity to experience them.

Back At The Coalface

Alongside their tonal balance, another very noticeable attribute of both the Daemon and Cyber Drivers series is their clarity of sound. The IRs in both series are clean and dry, with no audible room reflections or reverberation, which not only points to short sample lengths, but also gives you the opportunity to determine the exact type and size of reverberant environment in which your guitar sound will sit. 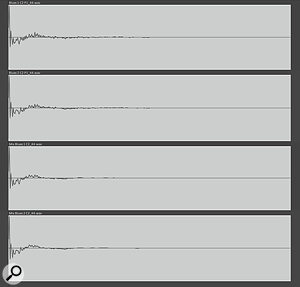 These traces illustrate the differences in response between the Cab 1 and Cab 2 IR captures, and are visual confirmation of the difference in the sound of the cabs. The differences in the traces between the original and Mix cabs illustrate the effects of the EQ on the response of the original IR.To fully explore the attributes of the 17 musical genres covered by the Daemon Drivers series would take a book, and the same goes for the Cyber Drivers. But I have prepared a few personal ‘tasting notes’, to give you a decent idea of what’s available: see the separate box. Meanwhile, to hear them in action, I recommend listening to the samples on the JTC website.

Although not every Daemon Driver IR that I auditioned managed to meet my personal tonal tastes, all of them sounded superb, felt good to play on and none of them (provided that I took care to match pickup type to genre), required any EQ to be immediately playable. The five mic styles, differing combinations of the two power amps and three cabinet types in all the Daemon packs that I auditioned produced extremely useful tonal variations that were a pleasure to use. The Daemon Driver’s pre‑EQ’d Mix cab IRs are not only good enough to drop straight into a mix, but they also offer plenty of options when searching for a cab sound to fit into a track.

Every single one of the IRs in the Cyber Drivers series is a masterpiece of its kind. All are dense, complex, full‑sounding and superbly voiced IRs, and I know that I will be using my favourites amongst them well into the future. Whereas the Daemon Drivers are relatively simple captures of single loudspeakers, the density that I hear in the Cyber Drivers’ tonality seems to point to a far more complex, extensive and exhaustive creation process. The basic sound of each of the Cyber Drivers collections may be based in the past, but Colin Cartmell’s MVHT creation methodology appears to endow them with a modern clarity and definition that I found highly attractive, extremely addictive and eminently playable.

Every single one of the IRs in the Cyber Drivers series is a masterpiece of its kind. All are dense, complex, full‑sounding and superbly voiced. 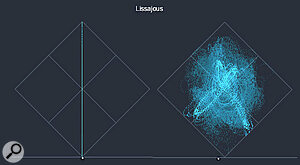 The Cab 1 IR on the left has no stereo width, but mixing in the ‘phase cab’ widens the sound stage due to the frequency‑dependent phase differences. 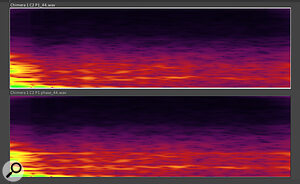 This spectrogram shows the subtly different responses of an IR and its corresponding ‘phase cab’.Adding in the phase cabs in order to widen the perceived soundstage only adds to the Cyber Drivers’ attractiveness. Interestingly, this cab isn’t 180 degrees out of phase at all frequencies, but rather is out of phase by differing amounts at different frequencies, with a seeming bias towards the frequencies in the upper reaches of the fretboard. Although you could pan the pair hard left and hard right, I found that ‘10 to 2’ panning seemed to me to give a better overall result.

Having talked to Colin at length about his creations, I can appreciate the study and years of work that laid the foundations of JTC Tones’ Drivers series and, while the full details of his MVHT process remain secret, the high quality of all these IRs is clearly the result of Colin’s very personal tonal vision. As I’ve said before, the man is a true tone hound and I, for one, am very glad he is. Whether you’re thinking about getting into using loudspeaker IRs, or you are already there, you really should check out both the Daemon Drivers and Cyber Drivers in detail. I am sure you won’t regret it.

There’s a heck of a lot of Impulse Responses to choose from in these libraries, so I’ve tried to offer an indication of the sort of sounds you can expect to find in each pack, and for the Daemon Drivers, I’ve suggested which guitarists’ sounds they put me in mind of.

These two superb collections of IRs offer a combined total of 930 tonally unique amp, cab and mic combinations. They cover a wide range of musical genres and applications and are great value for money.