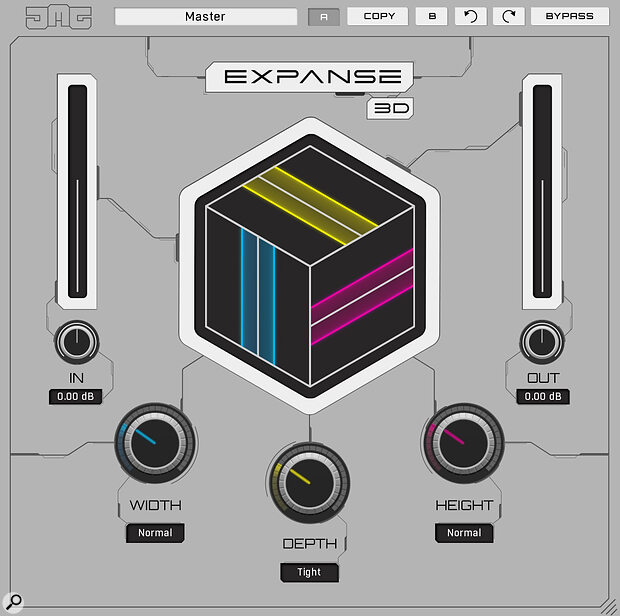 Adding to the growing portfolio of unitedplugins.com is Expanse 3D, JMG Sound’s spatial enhancement plug‑in for Mac and Windows DAWs (VST, AU and AAX), which the designers tell us employs psychoacoustic principles to “make your sounds deeper, wider and bigger”. Authorisation is via a personal key code that can be used on multiple machines, and sample rates up to and beyond 192kHz are supported.

The resizeable user GUI is about as simple as it could possibly be, with three main ‘amount’ controls linked to three sides of a cube graphic, joined only by In and Out level controls. Each section offers a small menu of processing modes. We’re informed that the processing includes a combination of analogue‑style saturation, spectral phase offsetting, re‑synthesis, intricate delay networks and other techniques, but a key point is that all the processing is mono compatible. The plug‑in can also generate a pseudo‑stereo output from a mono input.

Width is adjusted using a spectral phase processor, and this section simultaneously reduces the stereo width of very low frequencies to keep the low end sounding tight. An auto gain switch allows the user to audition settings without the loudness changing. The Width modes are Normal or Alternate, both of which are similar but have their offsets at different frequency points. Each has a normal and inverted version, and to separate instruments you can choose different modes, so that they will not share the same frequency offsets.

Expanse 3D has proved a useful tool for making tracks or mixes sound a little bit wider and a touch larger than life.

The impression of front‑to‑back depth is created using delay networks, transient manipulation and phase processing, to add a subtle ambience that helps glue sounds together by placing them in the same space. The three modes essentially offer different delay times.

The Height section enhances the highs and lows using established ‘exciter’ principles to generate new harmonics. In subjective terms, this produces a brighter, more airy sound while also adding harmonics to the low end, to create the impression of a more powerful bass sound when heard over smaller speakers. Where filtering is applied, it is designed not to introduce phase shifts, and the saturation algorithms include anti‑aliasing measures and up to 8x oversampling to keep them sounding natural. Ext Lo helps fatten up audio that has little bass, while for audio with little treble the Ext Hi mode may be appropriate. Ext Lo+Hi suits sounds with little in the way of highs or lows, though it’s worth noting that the Normal mode is generally the best of the bunch for using on full mixes.

I tend to be wary of ‘make it sound better’ boxes, but Expanse 3D has proved a useful tool for making tracks or mixes sound a little bit wider and a touch larger than life — just as promised. As with all such tools, it has to be used sensibly, but deployed tastefully it can help either increase separation between instruments or glue a group of sounds into a more cohesive whole, while expanding the stereo width to a useful degree. It won’t turn a bad mix into a good one, but it’s quite capable of adding an additional polish to mixes that already sound good. If you’re still not convinced, there’s a 15‑day free trial, which should allow you plenty of time to decide.