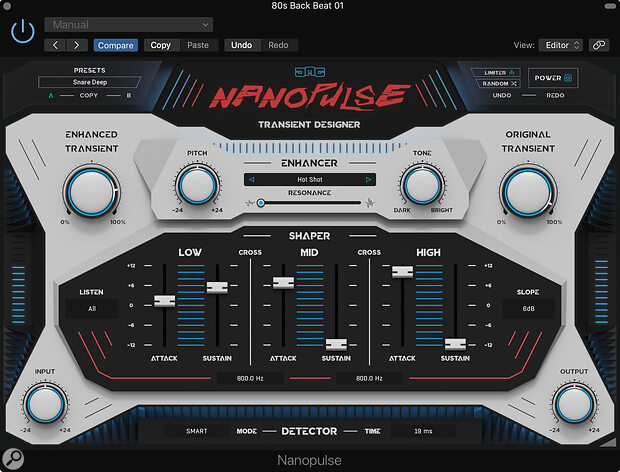 Marketed by United Plugins, JMG Audio’s Nanopulse is a sophisticated transient enhancer. It applies profiles extracted from a variety of percussive sources to the input signal to change the character of its transients, or even replace them entirely. The dynamics can then be adjusted using the plug‑in’s multiband attack and sustain processor, which offers separate attack and sustain level controls for each of three bands. The crossover points for each of the three bands can be adjusted, as can the crossover slopes, which can be set at 6dB, 12dB, or 24dB per octave, and there’s overall control of the tonality of the added transients.

The internal processing is at 64‑bit, with support for sample rates of 192kHz or even higher. When no processing is taking place, an auto‑sleep mode conserves CPU power. All the common Mac/Windows plug‑in formats are supported and activation is via personal licence files, so the plug‑in can be licensed on several computers if required.

The attack enhancer section offers a choice of 64 transient types captured from various percussive sources, such as drums, cymbals, wood blocks, string plucks and so on. These can be chosen as required or you can use a random option if you’re feeling more experimental. Once the transient type has been selected, the pitch, tonality and resonance of the transient can be adjusted over a ±24 semitone pitch range. Separate level controls for the new and original transient allow the two to be blended in any combination. A Listen option can be used to solo what’s being added, and a drop‑down menu offers a choice of which component to isolate if you don’t want to hear them all at the same time.

Once the transient type has been selected, the pitch, tonality, and resonance of the transient can be adjusted over a ±24 semitone pitch range.

Nanopulse has three different Detector modes. Smart mode detects transients regardless of their level. Spectral mode also takes into account tonality but at the expense of a little latency. Fast mode is best for separating closely spaced transients but it’s less effective at detecting low‑level transients. To the right of the Detector section is an adjuster for the length of the transient. An output limiter prevents overloading the output when heavy attack enhancement is being used.

The GUI, which includes in and out level meters, can be resized and presents all the controls on a single page, with the three‑band section dominating the centre. The Enhancer presets are selectable via a menu between the pitch and tone controls, while the overall plug‑in presets have their own browser‑type menus accessed via the Presets box at the top left.

There’s certainly a lot of creative potential here. At one extreme a kick drum can be made to sound deep and soggy while at the other it can be made tight and dry, with a bright attack. The pitch option opens up the possibility of ‘Let’s Dance’ type snare drums, while some of the more resonant treatments can add what sounds like a tuned wood block to the snare sound. Being able to control the contribution of the original and enhanced transients allows for some useful parallel processing options, which is particularly welcome if the chosen enhancement sounds a little too dramatic in isolation.

All in all, I have to say this is an impressive plug‑in that can transform any percussive sound or loop in a multitude of musically creative ways.