JMG Sound’s Mirror (for Mac and Windows VST/AAX/AU hosts) is available through United Plugins. It creates reversed delay/reverb effects that come before the note, and though it may seem that it would need to be able to look into the future to do so, it actually works by deceit: it ‘lies’ to the DAW when reporting its latency, so that everything gets delayed by an amount sufficient for it to add its pre‑note, reversed magic. Obviously this timing offset means you can only use the effect on tracks that have already been recorded — it’s can’t work magic on live performances — but it does take the faff out of creating reverse effects in the DAW. 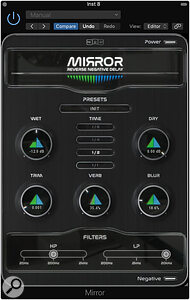 Mirror splits the audio into tempo‑related blocks of an eighth, quarter, half or a whole bar in length. The audio within each block is reversed, and then reverb and high/low‑pass filtering can be applied to the audio before it is reversed again. There are Wet and Dry level controls, Time buttons for the four buffer sizes, and Verb, to control the wet/dry mix of reverb added to the buffered audio prior to reversal. Trim adjusts the end of the reversed audio in order to soften any harsh transients, while Blur adjusts the dry/wet mix of a short diffusion reverb, again with the aim of softening transients. The adjustable high‑pass and low‑pass filters are applied to the reversed audio.

Before going further, both Logic Pro and Bitwig users need to know that these DAWs have a latency compensation limit, so if the reverse buffer exceeds a certain size the track timing will fail. That’s most problematic at low tempos, or when setting the buffer larger than an eighth or a quarter of a bar. I confirmed this in my tests running Logic 10.5, in which the one quarter setting runs fine at 120bpm or above. To get around this limitation where longer reversed sections are needed, it is possible to set the plug‑in to wet only (using the Negative button), which switches off the latency trickery. You can then record the reverse effect to a new track, and offset it negatively by an eighth, quarter, half or whole bar to match the plug‑in setting used. This will then sound correct when played alongside the dry track.

The ability to filter the highs and lows of the reversed sound is useful ,since you can add thin and wispy effects to hi‑hats.

While Mirror’s block‑based approach doesn’t produce exactly the same result as genuine ‘backwards tape’ reverb, the illusion sees to me to be close enough on most sound sources, and on quantised drum loops it can help reinforce the rhythm. With looser drum rhythms the result is a little less predictable but if you use a fully reverbed reverse sound it usually works out OK. It also sounds convincing on guitar parts and voices using the lower two block sizes.

From a creative viewpoint, I like that the reversed audio can set be anywhere between completely dry and 100 percent reverb, and having the ability to filter the highs and lows of the reversed sound is useful since you can add thin and wispy effects to hi‑hats and the like. There are presets here if you want them but it is just as easy to set up your own effects, really. In short, if you like reversed effects Mirror really takes the hard work out of creating them and it’s well worth checking out.