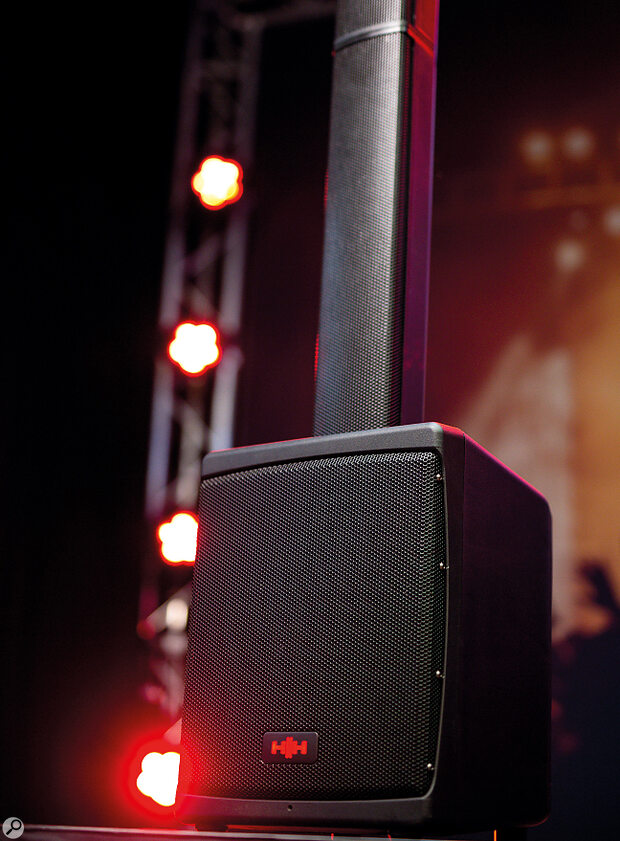 With its built‑in mixer and the option of battery operation, the HH Tensor‑GO offers a versatile solution for reproducing high‑quality live sound both on and off the grid.

We’ve looked at quite a few mini line array PA speaker systems over the past few years but the HH Tensor‑GO is a little different from the majority, being designed for both battery and mains operation. It is remarkably portable, weighing in at just 14kg. Its internal lithium‑ion 26V, 5200mAh battery charges automatically whenever the speaker is plugged into a mains supply, and can power the system for up to 20 hours when fully charged. There’s also a 12V input so you can charge the system from a car power socket or external 12V battery (such as a car battery or 12V lithium ion pack) using an adaptor cable.

The moulded polypropylene sub cabinet houses the necessary electronics for the amplifiers, power supplies and integral mixer, as well as an eight‑inch, long‑throw woofer. Despite being an easy carry, the sub still feels very substantial and accounts for almost 10kg of the overall system weight. On top of the sub goes the column, fabricated from ABS and comprising two spacers and an upper section housing six 2.75‑inch mid/high drivers. Alternate drivers are angled slightly left and right to increase the horizontal spread. This assembly slots into the sub, and each section has connectors to carry the signal to the column drivers built in, eliminating the need for additional cabling. When assembled the system stands 1990mm tall, but if you need it to be shorter, such as when working on a high stage or in a very low venue, you can omit one or both spacer sections. For transport, a padded subwoofer cover and a zip‑up column bag are included.

It’s not uncommon for mini line arrays to have a small mixer built in, and in this case the mixer offers four input channels. A variable amount of a preset reverb/delay effect can be added to the first two channels, which can accommodate mic or line signals via combi XLR/jack connectors. There’s no phantom power available, but as most potential users are likely to work with dynamic microphones that shouldn’t be a big issue. For channels 3/4 there’s a choice of input formats: a 3.5mm stereo aux input jack or two RCA phonos (both summed to mono), or a wireless audio stream via Bluetooth 5.0, with integrated stereo pairing when two systems are used in stereo. A Bluetooth pairing button is situated in this channel section. 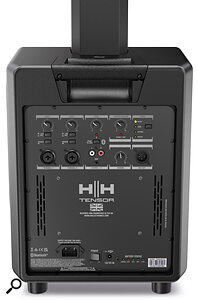 The base unit houses both the subwoofer and an integrated four‑channel mixer.Though two separate signals can be fed in via the TRS jack or phono connectors, a single volume control adjusts both inputs as it is expected that the source will be a stereo feed from a music playback device or possibly a keyboard. There’s no remote control Bluetooth app as there is for some mini line array systems, but with such basic mixer features, I don’t think one would be particularly useful. LED indicators provide a clip indicator, EQ mode status, an illuminated logo/power light, Bluetooth connection status and battery charge. The charge indicator comprises three green LEDs that indicate the percentage of charge remaining, and a further LED to show that charging is taking place.

A balanced XLR output is available to send the whole mix to another speaker. If you need stereo but don’t want to buy two columns, I’ve found that a small personal monitor type of speaker can often be used for the second channel; the lack of low frequencies from such devices is filled in by the column’s sub. This would mean using a separate stereo mixer, which is how I work with my own column system, but it produces good results and gets around the inherent limitation that mini line array systems are mono unless used in pairs.

Electronic protection includes a digital multiband limiter and a thermal overload protocol. By way of specifications, the system claims a frequency response of 50Hz to 20kHz, with power coming from a Class‑D amplifier rated at 200 Watts continuous and 800W peak power. The system delivers a maximum SPL at one metre of 121dB A‑weighted, which is impressive for such a small system, let alone one that can run on battery power. While the maximum running time is specified as 20 hours, the actual time will depend on how hard the system is being pushed. However, even when putting out a hefty level, there should be more than enough power to run for several hours. I should note that the battery can’t be replaced when it eventually fails, but that shouldn’t happen in a hurry, as lithium‑ion batteries tend to last for around 1000 charge cycles.

The mixer is very straightforward and works alongside a global EQ setting offering modes for Music, Live, Natural or Speech. There’s no individual channel EQ or provision for foldback mixes, so the global EQ is your only option for tonal shaping. Natural mode is essentially a flat response, and I found that it sounded fine using my dynamic vocal mics. The other options produce the expected ‘smile’ curve for Music playback, a little bass lift for Band, and trimmed highs and lows for Speech. The reverb effect, which is adjustable in amount in the master section, is a preset blend of reverb and delay and is added to channels 1 and/or 2 via separate on/off buttons. This means the amount added to the two channels can’t be adjusted independently; it is either on or off. Used sparingly, though, it gives a useful polish to vocals. Other than that, there’s just a master volume control, so operation is as simple as it possibly could be.

Not only does it work extremely well, but the Tensor‑GO put the pub’s 15‑inch woofer‑plus‑horn boxes to shame when it came to vocal clarity.

The Tensor‑GO delivers a confident‑sounding low end at reasonable volumes, though this maybe isn’t the PA to choose if you plan to mic up a drum kit or DI a bass guitar. It works well for vocals and instruments such as acoustic guitar, delivering an open, natural sound that would suit solo artists or duos working in venues where the audience is typically fewer than 100 people. Column systems such as this are generally very kind to vocals and acoustic instruments when compared with typical plastic box speakers, as the smaller mid/high drivers handle the important midrange very well. This was confirmed in my practical tests at two gigs. On one it was used as half of our PA system to feed one leg of an L‑shaped room and at the other, a smaller pub gig, it was aimed across the stage to provide monitoring and also to cover those in the audience who were behind the pub’s own PA speakers. Not only does it work extremely well, but the Tensor‑GO put the pub’s 15‑inch woofer‑plus‑horn boxes to shame when it came to vocal clarity. The system was also capable of more clean level than I expected and it could certainly hold its own against some of the smaller mains‑only mini line array systems I’ve used.

Music playback also comes over as clean and well‑balanced, making this system a good choice for performers who use backing tracks, whether plugged in or linked via Bluetooth. The mixer is super‑basic but gets the job done with zero complexity. If you need more facilities such as channel EQ, more inputs, foldback or a choice of effects, then a small external mixer with built‑in effects would do the job and there are plenty of affordable models from which to choose.

Clearly, having a powerful lithium‑ion battery on board adds to the cost, and for a similar price you could buy a mains‑only system that plays a little louder (and will certainly weigh more), but the option of battery operation opens up opportunities for outdoor performance at functions such as weddings or garden parties, seriously high‑quality busking, or general‑purpose voice amplification for speaking where no mains power is available nearby. The portability and fast setup time is very attractive and, like most mini line array systems, there’s good resistance to acoustic feedback combined with a wide but shallow dispersion to make the most of the coverage.

If you need a lightweight system that can produce moderate levels of clean sound with a choice of battery or mains operation, then HH’s Tensor‑Go system is the one to go for.

A quality, portable and battery‑powerable column PA that should serve well in a number of roles including small outdoor events.