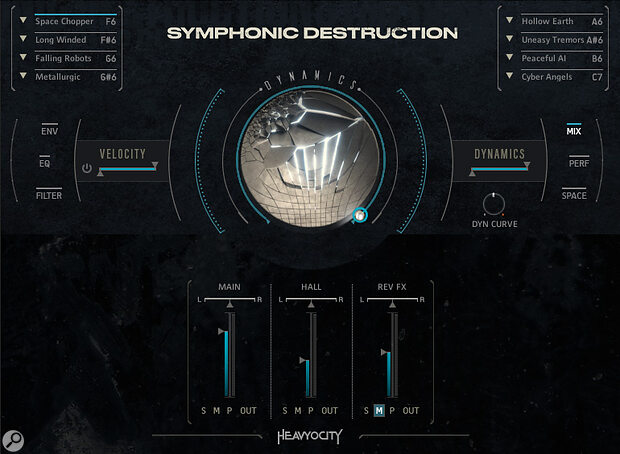 Heavyocity take a creative wrecking ball to the orchestra.

If I were a violinist I’d be wary of taking my instrument to a Heavyocity sampling session — these are the guys that dropped a school bus from a crane just to see what it sounded like, after which cutting a priceless Stradivarius in half with a chainsaw might just seem like a bit of harmless fun. Nevertheless, despite their reputation for wanton damage the company were able to assemble close to 100 musicians for their grand Symphonic Destruction project, which fuses traditional orchestral timbres with Heavyocity’s trademark face‑melting sound design.

Symphonic Destruction (SD for short) contains three main instrument types, the simplest of which is the ‘Performer’. There are eight Performer instruments, labelled Traditional, Hybrid, Damaged, Soundscapes, Traditional Pedals, Hybrid Pedals, Damaged Pedals and Damaged Guitars, each housing between 16 and 30 full‑range sources (aka articulations). Any of these articulations can be loaded into one of eight keyswitchable slots on the interface, so you can switch between eight different sounds on the fly.

To get you started, each Performer instrument provides eight or so snapshots which group together articulations of a certain type — for example, shorts, sustains, swells & crescendos, etc. Once you’ve found sounds you like, you can create your own setups by using the drop‑down menu beside the slots on the interface. Unusually, the artics’ keyswitches are duplicated in low and high positions, the former starting on C‑1 (MIDI note 12) and the latter on F6 (MIDI note 101), with the playable keyboard zone positioned in between — this gives flexibility of performance, but unfortunately the keyswitch positions are fixed and can’t be edited.

Heavyocity refer to their other main instruments as ‘Designers’. The SD Designer offers the deepest sound‑design facilities, while the Loop/Braam Designers share their own identical design and focus respectively on rhythm loops and big, blasting sforzando outbursts. We’ll take a detailed look at all of these instruments and the powerful timbres they contain. 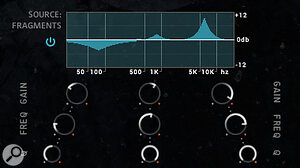 The instruments includes three‑band parametric EQ controls with adjustable bandwidth.Though the main thrust of SD is creative sonic mangling, there are useful unprocessed orchestral textures in the Performer ‘Traditional’ folder. These include sustains played by a stately, serious‑sounding full string section and a lyrical mix of strings and woodwinds, and some great incisive staccatos performed by various layerings of arco, col legno and Bartok pizzicato strings. The full orchestra’s short notes are given extra low end weight by a thunderous grand piano, while the players’ big, dramatic and sonorous crescendos stand in contrast with a set of beautifully composed, ultra‑spooky quiet atonal cluster chords.

While you can find broadly similar material to the abovementioned artics in other libraries, the ‘Hybrid’ artics see Heavyocity moving into more original territory. While string tremolos, loud, accented tutti short notes and crescendos are standard orchestral sonorities, the processed versions you hear in ‘Space Chopper’, the stonking ‘Alien Attack’ and ‘Flutteroid’ (one of the weirdest crescendo textures I’ve come across) have an intriguing synthetic quality — it’s an orchestra Jim, but not as we know it. I also enjoyed the glacial deep‑space reverb of the delicate ‘Frozen Tales’ harp/piano artic.