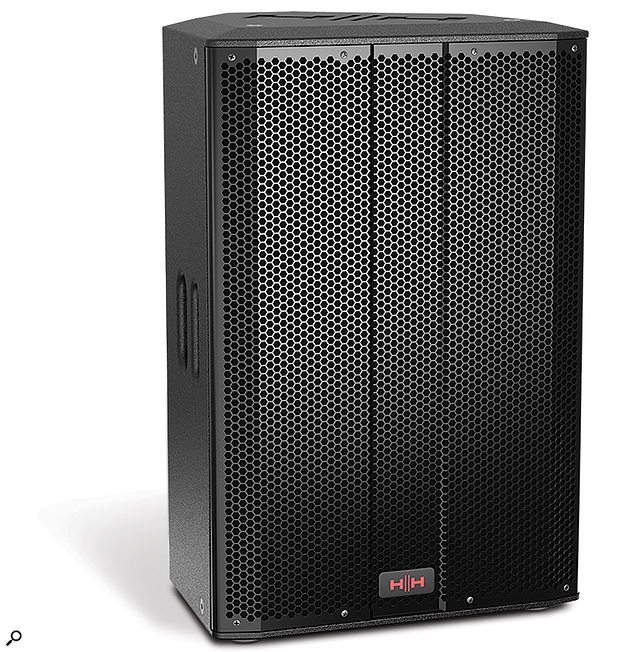 With its 15-inch woofer and flexible on-board DSP, HH’s new powered PA speaker offers a lot of bang for your buck!

The new Tessen two-way active PA speakers from HH have the ability to produce impressively high SPLs, yet they are very attractively priced given their performance capabilities. They are available in 12- and 15-inch versions, as well as a three-way 15-inch version; we were sent the 15-inch TNX-1501 two-way speaker for review, which shares the same general construction as the rest of the range. All are built using multi-layer plywood cabinets to reduce resonances, and the speaker is protected by a perforated 1.5mm steel grille with a thin layer of acoustic foam behind it. A discrete HH logo on the front can either be illuminated or left dark as you choose. A tough black textured-paint finish is applied to the wooden parts, and recessed bar handles are cut directly into the wood on either side.

For portable use, the cabinet would normally be pole-mounted, but it also includes seven M10 fly points for rigging either horizontally or vertically. As is now pretty much the norm with PA components of this type, the cabinet is shaped to allow the speaker to double as a floor monitor (at a 35-degree angle) and includes rubbery feet for that purpose, and there are also in-built EQ presets, with one specifically tailored to floor monitoring. The EQ presets, time-alignment, crossover and protection functions are hosted by a custom DSP, which also offers variable overall EQ for quickly matching the sound to the venue. A basic two-channel, line-level mixer is also built in, and the system enters a low-energy sleep mode when not in use for more than 25 minutes, waking automatically when it receives a signal.

Many speakers that rely on DSP offer similar features, but this one also has an on-board 12-band anti-feedback system that automatically seeks out feedback and then applies narrow notches to problem frequencies. Class-D amplification, cooled by convection rather than a fan, can summon up to a total of 2.6kW of peak power, providing plenty of headroom, but what really makes or breaks a PA speaker is the quality of the drivers. This model incorporates a long-throw, high-sensitivity bass/mid driver in a ported enclosure and a 1.4-inch compression driver feeding a horn, both built by Celestion (TF1525 and CDX1 respectively), delivering an impressive 133dB maximum SPL at one metre. While the speakers can be used with one or more subs in larger systems, they can manage a 40Hz to 20kHz frequency response on their own. Their directivity is asymmetrical, being 90 degrees in the horizontal plane and 60 in the vertical, which helps put the sound where you need it. Despite their impressive acoustic power output, the speakers weigh only 22.7kg each, partly thanks to the use of switch-mode power supplies and Class-D amplifiers. The overall size of the speaker is a practical 684 x 448 x 388mm. 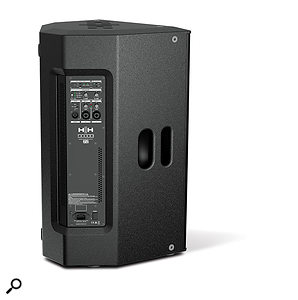 The rear panel houses two line-level inputs, and controls for the built-in DSP.Around the back of the cabinet is the input panel, where a pair of ‘combi’ XLR/jack inputs accepts balanced or unbalanced line-level signals. The manual doesn’t cover their use as as mic inputs but you can still get a mic to work through them as long as you don’t need huge amounts of volume. There is also a balanced XLR output for linking to other speaker systems; the output can be switched to carry either channel 1 only or a mix of both channels. Each input has its own gain control, and global LF and HF trim knobs adjust the overall EQ, providing a quick way to deal with muddy or boomy rooms. A clip LED indicates that the amplifier’s protection limiter has been activated (ie. when the system is approaching its maximum power handling), but under normal circumstances no actual clipping should occur, as the limiter will kick in first.

On a practical note, the rear-panel recess is quite large, wraps around a corner and has chamfered edges, which could still leave the control knobs vulnerable to damage if the cabinets are stacked in the back of a car or van without protective covers.

On powering up the speakers, a red LED lights briefly behind the perforated section of the rear panel, then it goes out and two green LEDs on the panel show power on and the current voicing selection. Turn on the anti-feedback system and another LED comes on. A button steps around the four voicing options comprising Flat, Bass (bass lift), Monitor (mid emphasis) and Voice (mainly low cut with a little mid-range tweaking), with four LEDs corresponding to the four options. To the right are the two EQ knobs for HF and LF trim, both of which have centre detents denoting their flat positions.

The anti-feedback system is simply on or off, which makes for a simple setup. Rather than being the type that lets you lock in some of the frequency bands during ringing out, this one leaves all 12 bands free to prowl, and once feedback at a particular frequency has subsided, the filter is released and returned to seek-and-destroy duty. As the notches used to tackle the feedback are so narrow, there’s no obvious detrimental effect on the sound quality. In practice, the anti-feedback works very quickly as soon as it notices that ringing is becoming bothersome. Where the vocalist holds the mic and is continually on the move, it might make sense to have all the filters floating like this, but if the mic stays on its stand and you want to fix the most problematic feedback frequencies while ringing out, a system that lets you lock some filters in place might have the edge. Still, I can’t complain, as relatively few speakers have anti-feedback systems built in, and this one works effectively without having any noticeable effect on tonality. Having a simple two-knob EQ that allows you to dial in more or less at either end of the spectrum is also useful, while the function-specific EQ presets seem well suited to the job in hand — and if like me you prefer to start from a known flat response, preset 1 gives you exactly that.

So how about sound — both quality and quantity? While more exotic (and more expensive) speakers might push that maximum SPL figure a few dB higher, 133dB peak is a lot of sound. I listened to these speakers reproducing recorded music from a distance of around 30 feet, without the assistance of a sub, and the result was punishingly loud when really wound up. To put this in perspective, most speakers in this price range offer SPLs in the 124 to 128 dB range. Pub and club gigs would be no problem for a pair of these speakers, where the addition of one or two subs would give you a formidable full-range system.

As to sound quality, the character is unsurprisingly a little on the forward side with everything set flat, but the sense of presence isn’t excessive and certainly helps maintain clarity in venues with less-than-perfect acoustics. It also helps compensate for the inherent lack of top end in some dynamic stage mics, though there’s plenty of EQ range should you wish to tailor the sound to your own preferences. The bottom end is none too shoddy either, being well-controlled and certainly punchy, though adding a sub would allow you to get a well-balanced sound at a higher volume level if you need to put a lot of drums and bass through the system. Importantly, the mid-range hangs together well, which isn’t always true of systems with 15-inch drivers, so vocals come across as clear and confident.

While not priced in the bargain-basement section of the market, the TNX-1501 is nevertheless a great-value workhorse capable of delivering on both clarity and volume. If you need something smaller, the TNX-1201 covers essentially the same frequency range and, on paper at least, is only 1dB shy of the TNX-1501’s peak SPL at 132dB. And if you want to move up to the three-way TNX-1581, then you get a hint more low-end extension, down to 40Hz, and a peak SPL of 134dB. If you like the idea of a British brand that uses Celestion drivers and you want maximum power for your pound, then this new Tessen TNX range has a lot to offer.

For this type of speaker the most obvious alternatives are probably QSC, RCF, HK, LD and JBL.

A tough, good-sounding speaker with a high maximum SPL at a sensible price.

£749 per speaker including VAT.