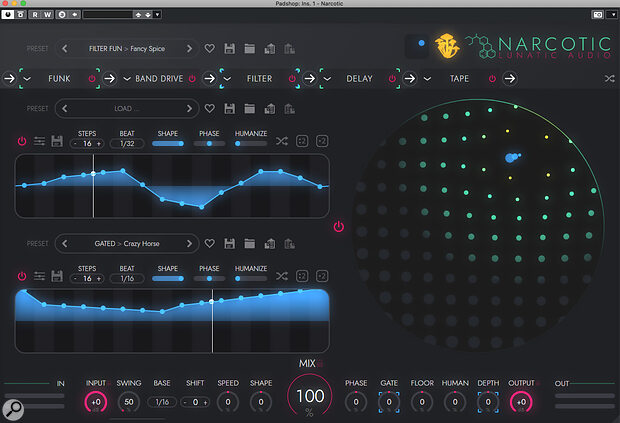 With its intoxicating amount of modulation options, this creative effects plug‑in could become rather addictive!

Having first tested the waters of the plug‑in market with their free Retro Pong (a bonkers but cool plug‑in that allows you to play Pong in your DAW!), Lunatic Audio have now delivered their first major paid‑for product. Called Narcotic, it’s a VST, AU and AAX multi‑effects plug‑in for Windows (7 or later) and Mac OS (10.8 or later), and it offers a generous dollop of sound‑design creativity, while still managing to retain both the cool and bonkers nature of Retro Pong (albeit a different sort of bonkers!). It also runs as a standalone app, which could be useful in a live performance context.

Built around a multi‑effects engine that boasts more modulation options than I care to count, Narcotic is in a similar ballpark to plug‑ins such as Output’s Movement, Sugar Bytes’ Turnado or Effectrix and UJAM’s Finisher Dynamo. As with those plug‑ins, you can use Narcotic to do conventional and subtle effect treatments but its primary design intention is most definitely at the more creative end of the processing spectrum. In particular, it’s intended to inject a sense of movement into the sound you feed into it.

As shown in the main screenshot, underneath the topmost control strip (where you can access the global preset system and the Shroom Magic button — more on that later), you can configure a signal chain of up to six effects from the 32 types available. These include some conventional effect types such as Reverb, Delay, Widener and various modulation types but, amongst those, there are also some less obvious types such as Steroids, Multiverse and Toxins. The list also includes various EQ/filter‑style options, Stutter, Glitch and Lo‑Fi, all of which are prime candidates for creating interesting electronica sounds out of even the most static synth pad. Only one instance of a specific effect type can be included in the signal chain but, even so, it’s easy to see that you can go from simple and subtle to complex and... well, not so subtle. 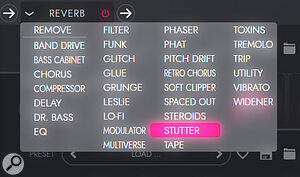 Narcotic’s generous menu of 32 different effect types.By default, the middle portion of the UI shows a large X/Y pad and a pair of step sequencers that can be used to modulate the X and Y axes. There is a well‑stocked set of presets for these step sequencers and you can load a different preset for each one. As described in more detail below, you can use individual parameters from any of the six effects to modulate the X and Y motion too; any number of parameters can be linked to either axis.

As well as being able to switch the sequencers off (there is also a global power button for the X/Y pad), the sequencers offer individual controls for step count and beat division as well as sliders to adjust Shape (smooths between the steps), Phase (offsets the start of the sequence), and Humanise (adds some timing randomisation). There are also options to halve/double the length of the sequence and to randomise the steps.

At the base of the UI is the Global Controls bar. As well as the wet/dry Mix control, and Input and Output level controls, there are a number of global controls whose influence is superimposed upon all the step sequencers associated with the individual parameters in each effects block.

Once you’ve selected an effect type for a particular slot, clicking on its name toggles the central portion of the display to show the controls for that effect. The control configuration differs for each effect type, but click on a control label and the display toggles to the step sequencer for that parameter, with a similar array of options to those for the X/Y pad step sequencers. You can leave all the step sequencers switched off and just set each parameter to a static value or, once you activate a step sequencer, draw/edit your own modulation curve with the mouse, or select a curve preset.

Within each effect, every parameter has its own step sequencer for modulation.

The UI itself is well laid out and easy to navigate. However, as with other complex effects that have interacting modulation control sources (Turnado or Movement, for example), figuring out just what influence a particular sequence of effects will have on your source sound can often be a matter of trial and error. Fortunately, Narcotic provides a number of options that can ease you into its sound‑design world. 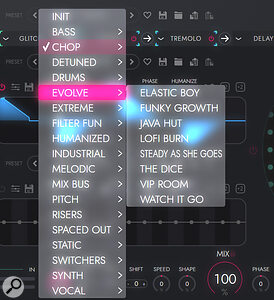 Narcotic ships with an impressive list of presets to get you started.First, there’s a huge collection of helpfully categorised global presets. These are a great launchpad for exploration of this plug‑in and, for some users, tiny tweaks aside, these might even be all that’s required. Second, there’s that Shroom Magic button I mentioned in passing. Click this and, after a brief and somewhat dazzling graphical interlude, Narcotic will deliver you a new preset, randomly drawn from elements within the existing presets. This is a great source of instant inspiration; just keep pressing (you might want to close your eyes at this point!) and stop when you find something that grabs your ears and could be worth a deeper dive.

Third, when building your own presets from scratch, even a single effects module can do some cool things to a sound source. And, as each effect type has its own set of presets to explore, you soon start to get a sense of what each has to offer. For many of the effect types, these presets are divided into ‘static’ and ‘motion’ categories. The former just have set values for each parameter and no active step sequencer modulation, while the latter make some use of the step sequencer options for added motion. There’s some sonic overlap between what can be achieved with some of the effect types but that’s no bad thing — it gives you multiple EQ/filter options and plenty of ways to add rhythmic interest — and even combining just a couple of modules can keep you exploring for some time. By the time you fill all six slots, the possibilities are pretty much endless.

In the main, adjusting the modulation controls for an individual step sequencer is straightforward and intuitive. Having written that, though, setting the low and high limits for a specific parameter can be a bit fiddly: you must hover your mouse quite precisely over the small red dot, wait for the icon to change and then click/drag horizontally; it’s a pretty specific type of move, though it does soon become familiar. The UI can be resized so, if you want to fill your monitor with Narcotic’s UI, that’s perfectly possible. Rather wonderfully, the UI’s proportions can also be changed, and the control layout adapts to suit — it’s a neat approach that I’d like to see adopted more widely.

There were also a couple of areas where I found myself scratching my head a little. First, I’m not exactly sure how the relationship between the individual step sequencers and the X/Y pad step sequencers works. Second, it would be useful if a fuller explanation of how adjusting the Global Controls bar settings influences the step sequencers in the effect modules were available. I hope Lunatic Audio will consider updating what is otherwise a very helpful PDF manual to explain these features in more detail. 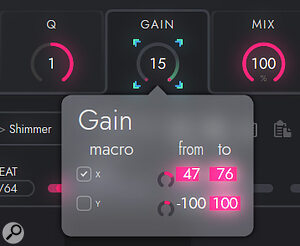 Any parameter can be used to modulate the X/Y pad controller on either axis.It’s also worth noting that, in this initial release at least, Narcotic don’t include a MIDI Learn feature, for quick linking of individual parameters to a physical controller for hands‑on control (the X/Y pad controls would be obvious candidates for this). In Cubase, I had no problems connecting any of Narcotic’s controls to an Automation Lane or the DAW’s Quick Controls and a similar workaround would presumably be just as easily achieved in other mainstream DAWs. However, MIDI Learn would be a very useful addition.

During the review period, I tried Narcotic on a large range of individual sound sources. Of course, it was particularly useful with synth sounds, and it could transform even the most static of synth pads into something that dominated the sound and rhythm of a mix. It also worked well with synth bass sounds, to add movement and rhythmic interest. Indeed, with the ability to filter, gate and add delay, almost any sound source could be given a ‘pulse’ to add additional texture to an arrangement. But it’s by no means limited to use with synths...

The possibilities with drum loops, for example, are impressive. You can take a simple loop and transform its sonic and rhythmic character almost beyond recognition. The results can be super‑cool and allow you to get an impressive amount of extra mileage out of any drum loop collection. And if you need to create some catchy vocal chops and stutters, there are some excellent presets to get you started on that. Oh, and applied to a mix bus, there are plenty of creative DJ‑style effects to be found too.

It could transform even the most static of synth pads into something that dominated the sound and rhythm of a mix.

While Narcotic will most obviously appeal to those making electronic music, I can also imagine it being put to very good use by media composers looking for some interesting sound‑design options for their hybrid/synth‑based cues. As mentioned earlier, the style and quality of processing is similar to that you can find in plug‑ins such as Movement, Turnado, Effectix and Finisher Dynamo. Of those plug‑ins, the last is perhaps distinct as it delivers that style of creative processing within UJAM’s characteristically keep‑it‑simple approach (the user gets a streamlined, macro‑controlled UI), whereas the first three, while extremely powerful, are unashamedly ‘deep’. They may, therefore, appeal to different types of user.

In terms of the complexity of the user experience, I’d say Narcotic slots in rather neatly between those two extremes. It provides plenty of user control, and you undoubtedly need to put some work in if you want to fully understand how modules and modulation options might interact, but the UI itself is not overly complex. If Sugar Bytes’ or Output’s offerings leave you peeping out from behind the sofa, and you feel UJAM’s Dynamo holds your hand too tightly, then Narcotic might be just the thing.

Notwithstanding my minor wish‑list comments, I found Narcotic an absolute blast to use during the review period. As Lunatic Audio’s debut paid‑for product, it’s all the more impressive. It’s also priced fairly (and, at the time of writing, the launch discount price was even more attractive!). If you are in the market for a creative multi‑effects processor to spice up your electronic music production, then Narcotic is well worth auditioning. It is also aptly named: it’s very addictive.

Narcotic is a great debut release by Lunatic Audio. Combining powerful and creative sound‑design options suitable for any sort of electronic music production, Narcotic is most certainly addictive.