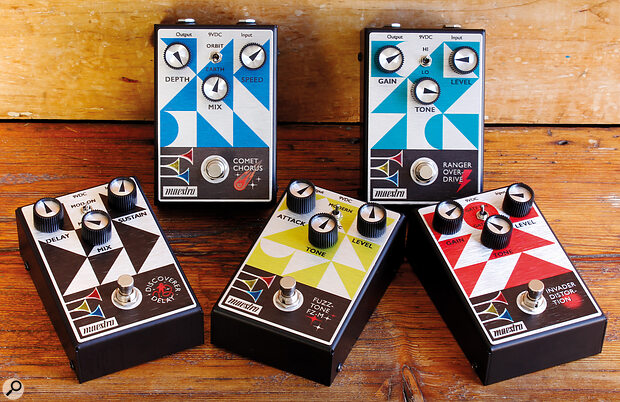 Despite some fantastic developments in electronics, the rule ‘old is gold’ seems to apply more than ever, and there’s a buoyant market for reissued and redesigned pedals that are either based on old circuits or capable of recreating classic sounds. It’s perhaps not surprising, then, that Gibson Brands — the company behind the famous Gibson guitars — have decided to take us back to where it all started, with five new pedals bearing the old Maestro name. Given Maestro’s history, it comes as no surprise that one of them, the FZ‑M, is a fuzz box, while the rest of the range comprises the Invader Distortion, the Ranger Overdrive, the Comet Chorus and the Discoverer Delay.

All of these pedals are analogue devices and they share the same rugged, folded‑steel construction, with the audio jacks and power inlet placed at the back of the case rather than the sides, to help you make the most of pedalboard space. All five of these pedals have true (hard‑wired) bypass and their cosmetics hark back to the original Maestro FZ‑1 Fuzz‑Tone. Gibson have managed to keep the asking prices reasonable by having these pedals built in China.

The battery compartment, which takes a standard 9V battery, is accessed via a couple of cross‑head screws that need to be loosened to allow the base plate to hinge back, though in deference to modern requirements there’s also a standard 9V input socket. A natty three‑colour light‑up ‘bugle’ logo shows the pedal is active. As well as the external controls, a couple of the pedals can also be tweaked to taste using internal trim pots, access to which require you to undo some screws and open the case.

The Maestro name is synonymous with fuzz. Like so many other guitar effects, the fuzz sound was reportedly discovered by accident — urban legend has it that the sound created by a faulty mixer channel is what started it all. Gibson, though, were the first manufacturers to produce a commercial fuzz box: in 1962 they released the Maestro FZ‑1 Fuzz‑Tone, which was built around three 2N270 germanium transistors and powered by just three volts. Believe it or not, it was first thought that this new effect might appeal to horn players, but it enjoyed little commercial success until the Rolling Stones released ‘Satisfaction’ in 1965. By happy accident, that immortal three‑note fuzz riff was originally intended to be a placeholder for a horn section — but as we all know now, it made it onto the final record and placed fuzz firmly on the map. Pretty soon there were many other guitarists creating their own signature fuzz sounds on record. Some of the most notable artists were Jeff Beck with the Yardbirds, Stevie Winwood with the Spencer Davies Group and, of course, Jimmy Page, who also put in a stint with the Yardbirds before going on to form Led Zeppelin.

The familiar nasal rasp of ‘Satisfaction’ is very evident when you have the Tone control set somewhere near its centre.

Unlike modern overdrive pedals, which tend to use diodes to clip the sound, the original Maestro Fuzz‑Tone used brute‑force gain to successively overdrive the second two transistor stages. The first stage was a unity‑gain emitter‑follower, designed to present the guitar with a suitably high input impedance. This was an important feature, since some other old fuzz pedals, such as the Dallas Arbiter Fuzz Face, only worked properly if fed directly by the guitar signal — with its built‑in emitter‑follower buffer, the Maestro Fuzz‑Tone was less fussy about its position in the signal chain. It was a simple device, though, with the only user controls being Attack (fuzz/gain) and Volume (output level). Gibson did reissue the Maestro FZ‑1A Fuzz‑Tone in the 1990s, but its appearance was brief and the model was discontinued. 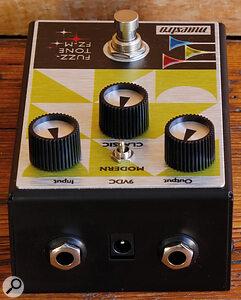 The five pedals share the same form factor, with the input, output and power inlet on the rear to avoid hogging too much pedalboard space.So the new Maestro Fuzz‑Tone FZ‑M is the first time Gibson have drawn on this design in a commercial product for quite some time. It’s not an outright clone, but that’s perhaps for the best: it has modern 9V powering, which is certainly more convenient than the original 3V system, and Gibson have also added a Tone control to the original Attack and Volume knobs, as well as a Classic/Modern switch to offer a choice of two different flavours of fuzz.

In Classic mode, the familiar nasal rasp of ‘Satisfaction’ is very evident when you have the Tone control set somewhere near its centre position, although it’s worth noting that when used with a guitar fitted with single‑coil pickups the Attack control needs to be wound fully up to get enough fuzz for that sound. At lower settings, the sound starts to clean up rather better than I recall being the case with many early fuzz boxes, which makes this box a bit more versatile. The lack of significant background noise is impressive too, and notes tend to fade gracefully rather than spluttering into extinction.

If you switch to Modern mode, you’ll find not only that the level increases slightly, but also that there’s a touch more weight to the sound, and generally more warmth in the mids. This all brings you much more into EHX Big Muff territory, and it doesn’t take too long to dial in a convincing Billy Gibbons raunch. Again, the notes tail away politely in this mode, which is usually a good thing.

In summary then, the Fuzz‑Tone FZ‑M is a classic fuzz box that’s capable of the classic Maestro sound, but has been tweaked to make it much more versatile tonally and much more suitable for the modern age. It does a fine job for a realistic price.

The other pedals in the range have little to do with the Maestro heritage really, but they look the part, and have plenty to offer. I’ll start with the Discoverer Delay, which is an analogue delay pedal that can produce between 20 and 600 ms of delay, courtesy of a bucket‑brigade delay line. It is kitted out with the expected Delay, Sustain (feedback) and Mix controls. Sustain is arranged so that at its maximum setting the delay doesn’t run away into uncontrollable feedback, which is probably good news for most users but could perhaps be frustrating for those who like to get into dub territory.

There’s also a Mod switch — flick this and the pedal adds pitch modulation to the delay. As shipped, this effect produces a strong vibrato which, when used in conjunction with longer delay times, is reminiscent of a fast rotary speaker. But two trim pots inside the case allow the user to set both the depth and speed of this modulation to taste. That’s a great facility to have, though I do think it would have been better still if you had top‑panel access to these trim pots — you could still keep the interface simple if they were accessed by poking a small screwdriver through a tiny hole.

As befits a good analogue delay, the repeats have a warmth and slight murkiness to them, which helps them sit behind the dry sound and dissolve into the distance in a very ‘natural’ way. Background noise is low, which was often a problem with earlier analogue delays, so this is a welcome update to a classic old‑school effect. As I’ve said, I would ideally have liked to see a panel control for adjusting the modulation depth as the modulation effect changes with delay time, but other than that I can’t fault the Discoverer Delay.

We all know pretty much what to expect from a chorus pedal and this one doesn’t disappoint. It offers a wide range of modulation speeds, from a slow churn to a fast rotary sort of vibe, and it has the expected controls for Speed, Depth and Mix. There’s also a switch labelled Orbit/Earth to give you a choice of two different modes.

Earth mode produces the most conventional chorus, whereas Orbit gives a little more prominence to the vibrato component — that’s something which is useful for approximating rotary speaker effects. Again, an internal trim pot allows the user to fine‑tune the Orbit effect and my opinion is the same: nice to have, but external control would be preferable. The bottom line is that if you need a chorus pedal that is low in background noise and high on user friendliness, the Comet Chorus should meet your needs, but it’s a saturated market, with stiff competition from the likes of Boss, EHX and TC.

The Ranger is what many people would call a ‘low gain’ overdrive pedal, insomuch as it adds a little ‘hair’ to the sound without overpowering your guitar’s natural tone. It has three knobs, Gain, Level and Tone, the last being a low‑pass filter for when you need to take some edge off the sound. There’s also a toggle switch labelled Hi and Lo.

In Lo mode, the gain is lower, so with single‑coil pickups you may need to work with the Gain control at or near maximum to get the desired effect. A little of the unprocessed sound is mixed into the overdrive to help maintain note definition, and in this mode the Ranger Overdrive would make an excellent ‘always‑on’ pedal to enhance the sound and feel of an otherwise too sterile‑sounding amp — while it obviously changes the sound, it always retains the overall character of the instrument.

In Hi mode there’s no dry sound mixed in and there’s more gain available, plus a stronger emphasis on the midrange, so this is a good setting for blues sounds. With humbucking pickups there’s a bit more drive available, and there’s a useful degree of level boost available via Volume, which may help you push the front end of your amplifier a little harder when that’s needed.

If you find the Ranger Overdrive just a little bit too polite, then the Invader Distortion might be a better pick. Equipped with the same rotary controls as the Ranger, the Invader Distortion might best be described as a medium‑gain drive pedal, with a slightly nasal tonal character that can go from only mildly dirty to classic rock gain levels. It doesn’t get into modern high‑gain territory, but there are plenty of specialist pedals for that style of playing. There’s good touch responsiveness here.

If you find that noise and hum become a problem at higher gain settings (as they can when using instruments with single‑coil pickups) a noise gate can be brought into play courtesy of a toggle switch. This is set up pretty well by default, and generally seems to tame the noise between notes without getting in the way of your playing. But if you find that you need to adjust it there’s an internal trim pot for setting the gate’s threshold level.

Take It Away, Maestro!

It is great to see Gibson reviving the Maestro name, and that they’ve included a fuzz pedal that delivers ‘that’ sound (and more) within the new range. But all of these pedals do their intended jobs effectively, with minimum noise, and their styling is distinctive and pleasing too. The additional adjustments and tonal options are welcome even if, as I said above, it might have been nice to have external access to the trim‑pot settings.

This is by no means an easy market to break into, as there are many excellent pedals out there already which offer similar features at similar prices — but every pedal in this range can hold its own in that company, and having the weight of the Gibson and Maestro names behind them can’t hurt at all!

While not offering anything radically new, these pedals cover all the classic analogue effects with style.