Les Paul was truly one of the pioneers of recording technology. Do Gibson’s first ever monitors live up to his illustrious name?

I sometimes wonder what kind of future Orville Gibson — restaurant worker and spare-time inventive luthier — envisioned for himself in 1898, as he held his newly granted US patent for the design of the F and A model mandolins that are made to this day by the company that still bears his name. I doubt he foresaw selling his patent and the rights to his name to the fledgling Gibson Mandolin Guitar Manufacturing Company in 1902. His death in 1918 at the age of 62 meant that he never saw Ted McHugh’s invention of the adjustable truss rod and the height-adjustable floating bridge in 1921; nor Lloyd Loar’s 1922 L5 archtop guitar; the ES-150 hollow-body electric guitar in 1936; the SJ-200 jumbo acoustic in 1938; the J-45 (the first guitars with cutaways) in 1939; or the sale of Gibson to Chicago Musical Instruments (CMI) in 1944.

I’d like to think that Orville would have welcomed the launch in 1952 of Gibson’s first solid-body electric guitar — a P90-equipped, single-cutaway model with a carved, gold-coloured top that carried the name of Gibson’s second-ever endorsee, the jazz guitarist, inventor and all-round legend that was Les Paul. 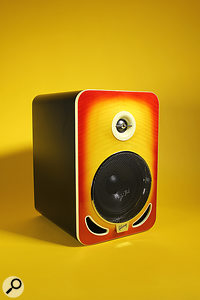 In addition to being a highly talented musician, Les Paul was one of the pioneers in the application of technology to the audio recording process. From his earliest efforts in the 1930s with serial overdub recordings on acetate discs, through pioneering sound-on-sound techniques on magnetic tape (most notably on his 1951 recording, with Mary Ford, of ‘How High The Moon’), the luxury of Ampex’s 1955 Sel-Sync eight-track and beyond, Les Paul combined stunning musicianship with a technological curiosity and inventiveness that seemed to know no bounds.

Gibson, on the other hand, were headed for harder times. In 1969, four years after shipping — for the first and apparently only time in its history — an annual total of 100,000 US-built guitars, Gibson and parent company CMI were bought by an Ecuadorean company and placed under the Norlin banner. By 1984, Gibson’s headquarters had moved from Kalamazoo, Michigan, to Nashville, Tennessee, and Norlin were failing fast. In 1986 the current owners, Henry Juszkiewicz and Dave Berryman, stepped in to rebuild Gibson’s fortunes. Nowadays, Gibson are but one of over 100 well-known musical instrument, pro-audio and consumer electronics brands that operate under the umbrella of Gibson Brands, as that agglomerate moves on its journey to become “the largest music and sound technology company in the world”.

One small part of that journey is the new active Gibson Les Paul 6 monitor, developed with input from that well-known loudspeaker manufacturer (and Gibson Brands subsidiary) KRK.

Les Get It On

The moment you strip away the shipping outers and first set your eyes on the gold-coloured, Gibson logoed cardboard boxes within, you realise that someone in the marketing department has been at work. Open the golden box and you’ll find a black plush-lined bag containing the monitor as well as a gold-coloured quick-start guide and a more prosaic brown box containing an IEC mains lead. Removing the black bag with due reverence reveals a not insubstantial black enclosure bearing a cream-bound flame maple front baffle that has been carved into contours reminiscent of a Gibson Les Paul guitar, and finished in a glossy, slightly lurid nitrocellulose cherry sunburst. Tobacco sunburst and cherry finishes are available as options.

The one-inch “diamond-like, carbon-coated, titanium tweeter” (I quote the specifications verbatim) crosses over at 2.7kHz and is recessed inside a circular cream plastic waveguide. Sitting across the aperture is a chromed plastic bar that could have come from a 1950s Cadillac, the central boss of which is presumably acting as part of the waveguide. The six-inch carbon-fibre woofer carries the familiar Les Paul signature logo and sits, in a short chrome-lined tunnel behind a metal mesh screen, at a depth that suggests that this driver is positioned behind the flame maple front baffle. The LP6’s bass reflex ports exit through a mirror image pair of cream-bound, curved ‘cat’s eye’ ports in the bottom corners of the front baffle, and an illuminated Gibson logo sits centrally between them.

At the rear, you’ll find the LP6’s volume control and its rotary, six-position switched shelving treble and bass trims. Inputs are courtesy of an RCA phono and a balanced XLR/TRS combi connector. There’s also an auto-standby defeat switch, the mains input and on/off switch, a small hologram of an elderly, waving Les Paul, and a black sticker that not only carries the speaker’s serial number, but also proclaims it to be a 2015 Limited Edition.

Thankfully, the LP6 monitors are simple to set up since the multi-language golden quick-start guide is big on diagrams but surprisingly short on information. It is also the first reference monitor guide (that I’m aware of) to contain a speaker placement graphic featuring a couple canoodling in front of a television set.

Aside from the diagrams, the manual says nothing about the monitors, other than stating that they “have been crafted and designed with passion to the smallest detail following Les Paul’s dedication to excellence, innovation and a superior audio listening experience”.

Having given up on the guide’s weird marketing speak (and the spurious claim therein that Les Paul held the patent for the eight-track tape recorder), I went in search of hard information on the Gibson Brands web site and came across one of the most uninformative presentations of technical specification that I have ever encountered. Frequency response is quoted as 37Hz to 47kHz (at an extremely generous ±10dB); maximum SPL from a pair of LP6 is 117dB with the units’ limiters engaged (though there are no measurement conditions stated); amplifier power (Hi and Lo amplifiers combined) is 247 Watts (RMS or peak isn’t revealed); amplifier distortion of less than 0.2 percent THD+N between 20Hz and 20kHz (at -3dB Max Power — whatever that is); signal-to-noise ratio of greater than 92dB (again no measurement information); and, finally, I discovered that the treble and bass shelving trim is at ±1, 2 and 4 dB — although the corner frequencies are not disclosed.

Set flat, that which Gibson Brands describe as the LP6’s “exceptional mid-range definition, and superb transient response” came across to me as a somewhat forward presentation that left the lower mid-range of acoustic instruments and voices sounding thin and cold. Higher frequencies felt similarly accented and, combined with the character of the mid-range, resulted in the bass feeling somewhat lighter than I’d expected. Switching over to bass-heavy tracks proved that the LP6 could reproduce bass frequencies, so it was time to tame the overall response with the EQ trims.

To my ears, +2dB of bass boost and -2dB of treble cut brought the LP6 into a better overall balance and resulted in a more credible performance that, whilst not completely neutral, would certainly be usable in tracking and mixing. The upper mid-range and treble sat back more whilst maintaining their high level of detail, the lower mid-range came forward, and the bass gained more body and weight. The bass response was well articulated, but its lack of extension was noticeable and a subwoofer would be essential when working with the LP6 on tracks with significant bass content. The stereo image was solid, allowing the instruments and voices to be placed and located accurately within it.

Since the manual’s graphics pointed to an anticipated usage in a domestic situation, I replaced my active hi-fi speakers with the LP6s and found that they seemed very much at home in that role. Sitting on low stands and EQ’d for that acoustic environment, the LP6s performed well with DAB, CD and vinyl sources and also managed to achieve aesthetic approval from the entity in my house whose word is law on such matters.

I must admit that I found the Gibson Les Paul 6 monitors to be more than a little confusing. Gibson Brands have, under their umbrella, companies and brands with decades of pro-audio experience, any of which, at the very least, should have been able to write a quick-start guide and a set of specifications to pro-audio standards.

Gibson Brands also seem to me to have missed the fact that, these days, the performance levels of small studio monitors have risen as prices have headed downwards. In particular, onboard DSP and digital amplification have so affected the performance/price ratio that certain of the major monitor manufacturers may be in danger of cannibalising the sales of some of their own higher-priced products with their new, lower-priced models. As a reference monitor the LP6 will, I fear, struggle against other studio monitors with similar pricing, and will also have real trouble with those at more aggressive price points.

However, looking at the golden boxes and the black velvet bags that they arrived in, maybe I’ve entirely misunderstood the LP6. Perhaps what we’ve actually got here is a lifestyle loudspeaker targeted at a specific guitar-owning customer demographic — in which case I think that it has fulfilled its brief.

As I said, I’m confused by the Les Paul 6 Reference Monitor. You’ll have to take a listen and decide for yourself.

As a reference monitor, the Les Paul 6 faces severe direct competition not only from the likes of Adam, Dynaudio, Eve, Focal, Genelec and Neumann, but also from lower-priced monitors from these, and other, specialist monitor loudspeaker manufacturers.

The Les Paul 6 is a loudspeaker with an attractive appearance and an overall performance and presentation that may well make it more suited to use in home recording and hi-fi applications, rather than in the recording studio.