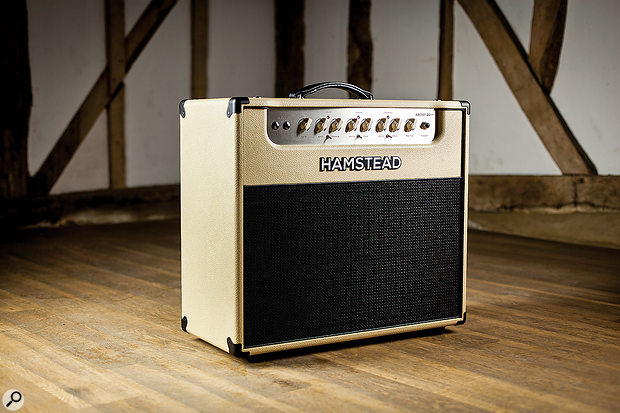 Peter Hamstead doesn’t play guitar but his unique background and no-compromise approach have led to the creation of a unique and wonderful amp...

Peter Hamstead has an untraditional background for a valve amp designer: he doesn’t play guitar and his years of experience in electronics were gained largely in avionics and RADAR. Yet, when Peter was asked to replicate a much–loved and much–modified vintage amp for its owner, he realised that not only could he replicate it, but that his knowledge and experience would allow him to better it. With entrepreneurial input from his son James, Hamstead Soundworks were born, with the stated aim of “doing things properly”. For Peter, that means designing for no compromise in durability and tone, using high–quality components, parts and materials (sourced from the UK, where possible) and employing the circuit design, construction and hand–assembly techniques that produce the best results. The company’s first amp is the Artist 20+RT, an EL34–powered 20W amp with reverb and tremolo. It’s available either as a head or as the 1x12 combo we have here.

The first thing that struck me about the 20+RT combo was its air of sheer quality and attention to detail. The seam–free cream Tolex covering is fastidiously applied, while the black trim strips around the black grille cloth have been fitted with great expertise. Just to ram the point home, not only are the black corner protectors riveted into position, but the single, similarly hued leather handle is positioned slightly towards the front edge of the cabinet to counterbalance the weight of the transformers — when you pick this amp up, it feels beautifully balanced and hangs plumb vertical. The cabinet is physically imposing for a 20W 1x12 combo, being somewhat heavier, higher and deeper than my vintage Deluxe Reverb.

The front–mounted brushed stainless–steel control panel carries the cream chicken–head knobs and toggle switches that take care of gain, tone, reverb, tremolo, master volume and switching functions. These functions are replicated on the included four–button Quad footswitch that overrides the front–panel switching for Voice, Reverb and Trem when it’s plugged into its assigned jack socket on the back panel. Here you’ll also find the cabinet and extension–speaker sockets; the send and return jacks for the series effects loop (switched in and out by the fourth button on the Quad footswitch); the switch that swaps the output valves between Triode and Pentode modes; and (finally) the amp’s on/off switch, fused IEC socket and voltage selector. Nestling within the open–backed, birch–ply cab’s black–painted interior, you’ll find a full–length spring reverb tank and a solitary G12–65M ‘Creamback’, which is one of the few of Celestion’s loudspeakers still being made in the UK.

The amp’s chunky mains and output transformers are built in the UK to Hamstead’s specifications and both are capable of handling much more power than they have to. Voltage rectification is solid state rather than valve and, in another example of attention to detail, fully legended spare fuses are mounted on the PSU circuit board. 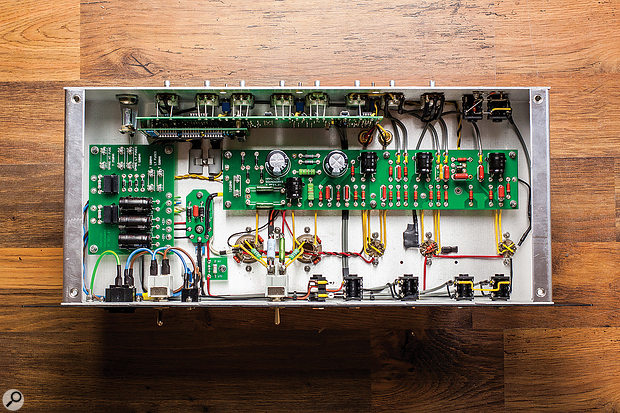 The internal construction is neat not only to make it look pretty, but also to ensure noise is kept to an absolute minimum.

Unlike the transformers, valve bases, potentiometers, switches and jack sockets, which are all chassis–mounted, the components within the audio path sit on one or the other of two heavy-duty, high–quality PCBs. Some ‘purists’ can get a bit sniffy about PCBs in valve amps, but well–designed boards (stuffed with high–quality components, as here) that have been built with tracks capable of carrying the voltages and currents passing through them are, in my view, going to prove more reliable than (and sound no different to) the eyelet or turret boards beloved of boutique builders.

The smaller of the two boards sits vertically behind the front panel and carries the circuitry that deals with the Voice, Reverb, Tremolo and Master Volume functions. The ICs associated with the solid–state reverb and tremolo are located on a small daughterboard mounted on stand–offs. The larger PCB is mounted horizontally and contains the circuitry for the two ECC83 (12AX7) preamp valves, the ECC83 phase inverter and the two cathode–biased EL34 output valves, running in Class AB. As in a conventional valve amplifier, the Gain, Treble and Bass controls act on the audio signal via this board.

Internally, everything’s hand–wired and adheres to a low–noise ethos and standard that I’ve not seen before. Wires run in parallel in straight lines, either longitudinally or laterally; wires cross at right angles to each other; corners are turned at 90 degrees; and signal wires are screened, while non–screened wires are spaced to avoid crosstalk. This doesn’t only look good, it also gives the 20+RT a noise floor that’s possibly the lowest I’ve ever witnessed on a valve guitar amplifier.

The Artist 20+RT is a single–channel, master-volume amp with Lo and Hi (that is, low and high impedance) inputs. The impedances are those you’ll find on most single-channel, Lo/Hi input valve amps (136kΩ and 1MΩ respectively) and the Hi is 6dB hotter than the Lo. You don’t need to get too hung up on the level difference; just experiment to find which sound you prefer when your guitar is plugged into each input. Unlike many valve amps I know, the 20+RT’s bass and treble controls are very effective. Their frequencies are well chosen and are complementary rather than interactive in operation. 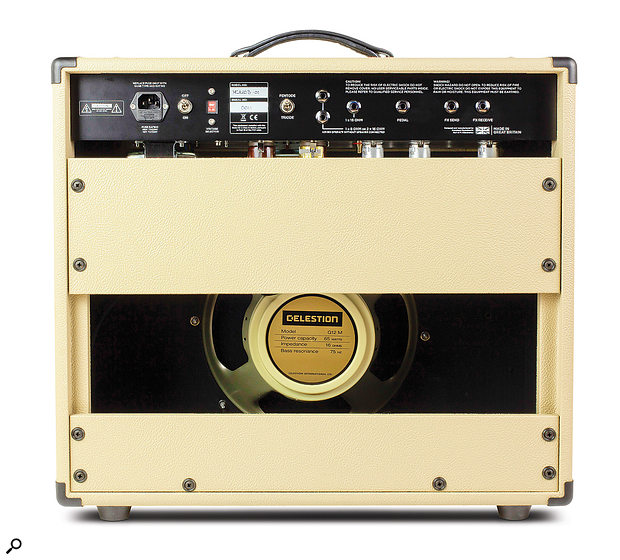 Despite its modest 20W rating in Pentode mode, this is a loud amplifier when wound up. With the master at around 2 o’clock and the gain at about 10 o’clock I got a clean, tightly focused sound, with a touch of output valve distortion that gave the amp a really solid tonal quality at a volume level that was more than capable of annoying the neighbours. Reversing the settings gave me a gorgeous touch–sensitive preamp–based breakup that I could take back through crunch and down to clean simply by lessening my pick attack and/or pulling back my guitar’s volume control.

It’s worth noting at this point that the 20+RT’s output stage runs without negative feedback and that its output transformer, which is capable of handling over 60W, can’t get pushed into saturation by the twin cathode–biased EL34s. This means that the power-amp distortion increases smoothly as the valves are overdriven and that you’re hearing pure output valve distortion when you push the master level up high.

With both the gain and master controls at around 10 o’clock the 20+RT proved to be a noise–free, crystal-clear, completely clean amplifier that responded really well to any effects pedal, or even an entire pedalboard, in front of it. Crank both those knobs round past 3 o’clock and you’ve got a bit more of a hooligan on your hands — but a hooligan that doesn’t hiss annoyingly or hum, never gets out of control and doesn’t swamp your chord articulation in distortion!

Switching to Triode mode drops the volume level but not by as much as you might expect from only 9W, and it softens and loosens the sound whilst retaining all its sonic qualities. In triode mode, the 20+RT had an intimate, organic feel to it that I really enjoyed. The sound gained an overall gentler edge and an attractive warmth that stayed around even when pushing the power stage hard.

The Quad footswitch can connect to the amp using any mono or stereo guitar lead. Switching in the Voice function, which is basically a mid–range boost, gives an apparent increase in volume and makes the guitar sound much more forward, which is very useful if you want a bit more weight and definition when playing a solo.

The full–length reverb springs sound huge and cavernous, with the amp’s solid-state send and receive circuitry giving them a clarity I don’t get from my Deluxe’s reverb. The reverb’s dedicated tone control cuts bass when boosting treble (and vice versa), so it was a fairly simple matter to tailor the reverb to the guitar sound. For reverb–drenched surf sounds, it’s fabulous. The only downside of having such a massive reverb is that it’s a bit fiddly to set it for more subtle enhancement — the reverb return level goes from zero to far too much in only a few millimetres of travel.

The tremolo was similarly stupendous: a completely even cycle (unlike my Deluxe and every other Fender I know), no tick noise, a full and eminently usable depth range and a speed control that runs from 0.3 to 15 Hz, or in layman’s terms, really slow to really fast.

The only issue for many of us will be the price, because in absolute terms, it is undoubtedly pricey. Yet you’d pay about the same or more for any amp of equivalent quality, so it actually isn’t expensive in the context of its position in the market.

In terms of what you get for that kind of money, Peter Hamstead’s clean–sheet approach to design has delivered something that really is a bit special. In fact, I can safely say that I have never before heard an amp like the Hamstead 20+RT. My closest experience was running my much–loved, but long–gone, 1964 blonde 100W Fender Showman at the point where its output valves were starting to distort, my ears were beginning to bleed and my MXR Distortion II sounded more than mighty! To have that kind of response under my fingers again and at a volume that didn’t mandate ear defenders was a wonderful experience. Add to that output stage the 20+RT’s superbly touch–sensitive preamp, switchable mid boost, smooth tremolo, a reverb wash that Dick Dale would have given his eye–teeth for, and you have one extremely happy guitarist.

Most British boutique amp builders take their inspiration from classic amp designs without bringing much innovation to the table. The exceptions to this include 633 Engineering, Audio Kitchen and MJW Amplification.

The 20+RT is a superb, hand–built 20W valve amplifier from a new British boutique builder who offers an innovative, clean–sheet approach to amplifier design. Delivering outstanding performance with a unique voice, the 20+RT also boasts very low noise, and should be auditioned by anyone searching for a guitar amplifier of this quality for studio or stage work.