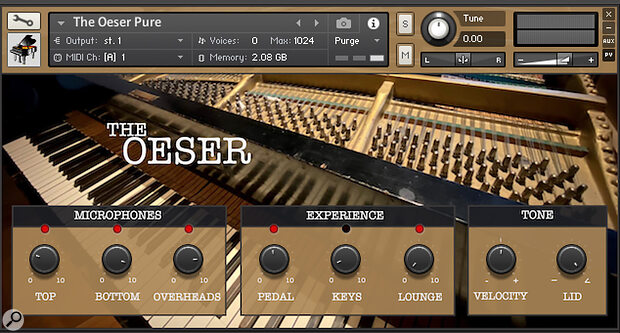 This 32GB Kontakt library presents an unusual Viennese baby grand piano from 1877 by the little‑known maker Franz Oeser. The original piano lives in Key Studios in Friesland in the Netherlands, and whilst it’s not exactly a historically important piano it has vintage character and atmosphere in abundance, and a sound that fits right into that rarefied, intimate piano sound‑world that is in vogue right now.

In Kontakt (full or Player), four separate instruments are on offer. Pure is a straight capture of the piano. Felted is dreamy, thicker and diffuse with some weirdly beautiful slow attacks. Picked is the sound of the undamped strings played with a guitar pick: equal parts harp and harpsichord, but with natural‑sounding note ends implemented by default. Muted, finally, is a hand‑mute, a musically useful ‘prepared’ tone that goes to a dark sustain after a rubbery attack. This one misses out the top octave. All are usable alone, but they also blend well together.

The Pure and Felted instruments have had the greater share of the sampling love, with full‑length samples, multiple velocities, sympathetic resonance effects and a separate pedal‑down capture. But even Picked and Muted benefit from three mic positions which can be blended to taste. The Top mics are warmest and most intimate, while Bottom is unexpectedly light in character, with the least stereo width. Overheads bring in a greater sense of space. A ‘Lounge’ knob adds even more, though this is a reverb rather than an additional set of samples. Stereo imagery is baked into the capture and not adjustable, but is pleasing if slightly quirky, with notes in the bottom two octaves sitting centrally in the image, and higher pitches fanning from left to right as you’d expect. It’s unclear whether this is related to the piano’s string banding or the sampling implementation — anyway, it’s a feature rather than a problem.

Most importantly, this piano delivers both musically and atmospherically. It sounds 145 years old but in a really good way...

Pedal sounds (which have a few round‑robins) are notably ‘mechanical’, and for my taste the additional key noises rather two‑dimensional, but both can be turned down or off. Pedal response is a digital affair, by the way: the pedal‑down sound is good and rich, but there’s no support for partial or half‑pedalling. Meanwhile the velocity knob does what you might expect, generally making the instrument feel softer or more strident. Currently it causes some unwanted note drop‑outs at low settings but Key Instruments say there’s a fix for this in the pipeline.

So the implementation is all pretty nice. Most importantly, this piano delivers both musically and atmospherically. It sounds 145 years old but in a really good way, with an honest, lived‑in quality underpinned by an accuracy that keeps it usable and versatile. It should work equally well for uses both soulful and cinematic and is a new favourite in my sound library.