Regular readers of this tome will know that I love early Korg synthesizers — the 700, 700S, 770, the 800DV and even the funny little 900PS. The 700 was my first synth, the 770 was so damn cute, and the 800DV is the monster on which I first learned how to detune oscillators and play Tarkus, but the one that remains best known today is the 700S. Sometimes dismissed as ‘merely’ a 700 with a second oscillator, it’s an often underestimated synth that made some of the classic sounds of the 1970s, so perhaps it’s not surprising that this was the iteration that Korg decided to recreate.

Its first reincarnation appeared as a soft synth within the Korg Collection 3 bundle. I reviewed this in Sound On Sound in February, and found that it was a great little synth, although not entirely accurate when compared with either my MkI or MkII originals. If we assume no unnecessary compromises, mistakes or oversights by Korg’s software engineers, there are two possible reasons why these differences exist; either they modelled the soft synth on a 700S that was differently calibrated, or my 700Ss have drifted away from the ideal in the same ways over the past 48 years. Since both of mine sound the same and the soft synth was the outlier, I concluded that the former was true. But now there’s the 700FS too, and the chance to compare this against two vintage 700Ss and the soft synth was far too good to miss.

It’s far from the most powerful of monosynths, but rather a simple instrument with a distinctive character that screams ‘play me!’

The review unit arrived in a box that was considerably heavier than I had expected. All was explained when I opened it because, rather than an inner box, the 700FS comes in its own dedicated case. Following on from Korg’s ARP Odyssey, ARP 2600FS and ARP 2600M, this demonstrates a pattern to the company’s thinking, and very welcome it is too. So I removed this from the box, opened it and... Oh my word! It’s gorgeous! The 700S was always a beguiling little synth, but the 700FS looks even nicer than the original did in 1974. There’s just something, well, classy about it. This was a very good start.

A quick inspection showed that all of the functions of the original are recreated here but, not content with building a clone, Korg have incorporated many important new facilities into the 700FS. Perhaps the most visible of these are the 14 memories, selected using the Bank and Program buttons found behind the Effect panel. Nonetheless, given the number of bytes needed to store a patch — remember, many of the parameters are just on/off switches requiring but a single bit of storage — this seems incredibly parsimonious and suggests that Korg have used a tiny area on an existing device rather than dedicated memory.

Another update is revealed when you realise that there are nine toggle switches on the front panel rather than eight. The new one controls a Hold function that does exactly what you would expect, holding a note (depending, of course, upon the value of the Percussion/Singing slider) indefinitely after you release the key. The next addition is an arpeggiator with seven modes: repeat, as played, up, down, two forms of up/down, and random. You select between modes using combinations of the Bank and Program buttons and, although this is arcane, it works. Having done so, you turn it on and off using the Repeat switch which, with the first option selected, recreates the Repeat function of the original. However, my experiments showed that only eight notes are stored, so if you’re hoping (as I did) to use the ‘as played’ mode to create extended sequences, you’re going to be thwarted. Nonetheless, the combination of Repeat and Hold opens up a lot of possibilities that were not present before. 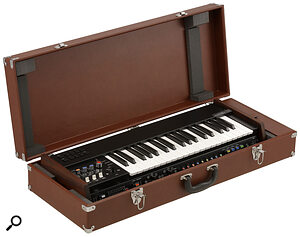 The miniKORG 700FS comes with a hardcase in authentic ’70s brown.Two more features are revealed by the addition of a small joystick in the Effect panel and the Spring Reverb slider alongside the volume control. Apparently, these were considered for the original 700 and 700S but didn’t make it to the final design because of space considerations, so it’s good to see them reinstated here. The left/right action of the joystick always affects the pitch with a range of ±2 semitones, but you can program the destinations and amounts of the ‑Y (toward) and +Y (away) movements independently. Again, you do so using the Bank and Program buttons, selecting the parameter that you want to control as well as the amount and polarity of the effect that the joystick has upon it. Since the joystick can only be routed to sliders, the range of destinations is small, but the modulation speed and depth, the second oscillator’s tuning (which is important when creating complex tones using the Effect section), as well as the high‑pass and low‑pass filters’ cutoff frequencies (the ‘Travelers’) are all available. The reverb is another nice addition. You might think that an all‑singing, all‑dancing digital reverb would have been more useful but, just as a spring reverb is right for many electric guitar sounds, the one in the 700S enhances its sound in exactly the right way. What’s more, despite it having enough gain to make a significant difference to the sound, I wasn’t able to make it howl, which was nice.

In addition to the visible enhancements, there are several invisible ones. For me, the most important of these is the addition of aftertouch. Programming this is achieved in the same way as programming the joystick, and with the same...