No matter what headphones you prefer, Lake People’s versatile amps will feed them the right level.

Lake People are a long‑established and highly-regarded German manufacturer of mic preamps, headphone amps, phono input stages, A‑D and D‑A converters and other such equipment. Sister brand Violectric targets the hi‑fi market, whilst Lake People’s own products are more studio‑oriented, majoring on no‑nonsense build quality and an engineering‑led design approach. Both are very apparent in their new G10x series of headphone amplifiers, which incorporate some unusual features that have the potential to be very useful in recording contexts.

There are three models in the series, all housed in smart and robust anodised aluminium cases, and the design ticks a lot of boxes before you even get around to plugging them in. All have internal mains power supplies, and the large front‑panel volume controls have a reassuringly solid and smooth feel to them. As we’ll see, there’s also more to the functionality of these amps than meets the eye.

Of the three models, all are 1U high, and the G103‑S MkII and G103‑P MkII differ in only one respect: the S or Standard model is equipped with unbalanced phono inputs, while the P or Professional version has balanced inputs on female XLRs. Both are, by my reckoning, 4.75 inches wide, meaning that four could conceivably be placed side‑by‑side on a single rack shelf. Such an arrangement would give you four duplicate pairs of headphone outputs, as each G103 has two quarter‑inch outputs with a single volume control.

The G105 MkII (shown above) is an altogether more complex device and is one‑third rather than one‑quarter of a rack space wide. It has both phono and XLR inputs, and the front panel features a second large potentiometer for left‑right balance, with a centre detent. It also has a three‑position switch which sums the left and right signals to mono in the up position, and flips the polarity of the right channel in the down position, both very useful signal‑checking features. Under normal circumstances, both headphone sockets receive the same stereo signal, but a ‘split’ button feeds the first socket instead with a mono signal derived from the left channel, and the second from the right channel.

So far, so mostly conventional, but removing the four bolts that hold the lid on gains you access to an impressive array of jumpered settings. Those at the front are 2.5mm hex bolts, while the rear pair are Torx T10. No tool is supplied but the appropriate Torx screwdriver should take care of both.

The G105 features both RCA phono and XLR inputs. To gain access to the internal jumpers, it’s necessary to remove the two upper bolts at either end.

G Is For Gain

Common to all of the G‑series headphone amps is something Lake People call ‘pre‑gain’. This is their solution to the problem that bedevils most headphone amps, namely the need to cater for headphones with a huge range of sensitivity and impedance specifications. A range of output voltages that feels comfortable with modern, high‑efficiency, low‑impedance phones will typically struggle to deliver enough level with high‑impedance models; conversely, a range that works well with an older pair of 600Ω studio cans will be wasted on newer phones and risks causing hearing damage. Pre‑gain is, in effect, an additional semi‑fixed gain setting, which is configured using the aforementioned internal jumpers. By default, it’s set to its middle +6dB position, with the other options being ‑6, 0, +12 and +18 dB.

The design ticks a lot of boxes before you even get around to plugging them in.

In the G103‑P and G105, three further jumpers can be used to alter the grounding arrangements. The chassis is always connected to the mains safety earth, as you’d expect, and the jumpers enable various different grounding scenarios for the audio circuitry. One determines whether the audio ground is tied to or lifted from the chassis, the latter being the default, while two further jumpers determine whether or not pin 1 on the XLR inputs is tied to the audio ground plane — the default arrangement — and/or to the chassis. The review units were dead quiet in the default arrangement, so I left it like that! For obvious reasons, only the main ground lift switch is included on the G103‑S.

The G‑series headphone amps have impressive, and impressively thorough, spec sheets. At less than 0.1Ω, the output impedance is a pretty good approximation to the modern ‘zero Ohm’ ideal, and on the input side, the G105 and G103‑P can accept levels of up to +21 and +20 dBu respectively. Dynamic range for the G105 is quoted as more than 128dB with two 600Ω loads connected, and at least 125dB with dual 150Ω loads. Crosstalk is better than ‑80dB at 1kHz and ‑70dB at 15kHz, and TDH+noise is less than 0.001% for a 1kHz signal when delivering 800mW into two 100Ω loads. The specs define the maximum output level as the point where 0.1% THD+N is reached for a 1kHz signal, and include a table showing how this varies for six different loads. From 370mW per channel for a dual 16Ω load, this rises to 2000mW for 100Ω before falling again to 490mW for 600Ω cans. The G103 specs differ in some respects, and this model seems to deliver the most clean power at 50Ω rather than 100Ω. Either way, there seems to be plenty of power on tap for headphones of all stripes, which is no doubt helped by the use of ±25V supply rails rather than the more normal ±15V. 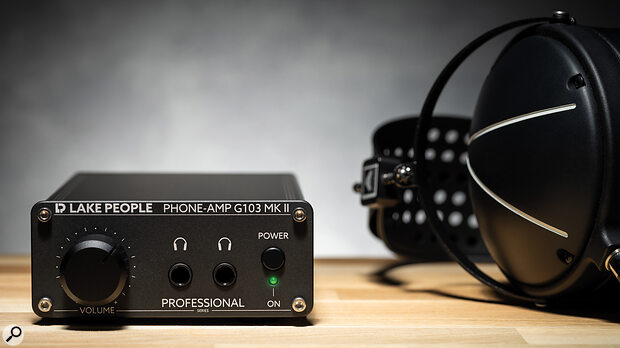 High‑impedance, low‑efficiency headphones seem to be thin on the ground these days, and I wasn’t able to lay my hands on any really old‑school models for testing, but I did get to try the Lake People amps with a good variety of modern 'phones. These varied from super‑hot, very low‑impedance cans like the Rode NTH‑100 and OneOdio Monitor 60 to somewhat more challenging devices like the 120Ω AKG K601 and the relatively inefficient HEDDphones. Lake People suggest that the pre‑gain be adjusted so as to give a comfortable level at the halfway or 12 o’clock position on the volume dial. With mastered material and full mixes, the default setting was a fair bit hotter than this even with the HEDDphones.

For most of the review period I fed the G‑series headphone amps from the line outputs on a Focusrite Red 8Line interface, and swapping to the built‑in headphone sockets on that interface made for an interesting contrast. There was more of a difference in character than I expected, especially in the bass and lower midrange, where the G‑series amps sounded somewhat leaner. If anything, they made the Focusrite sound a little clouded in comparison, which surprised me.

Although the dual headphone sockets are governed by the same volume control, there’s no interaction between them that I could detect; plugging and unplugging loads into the other socket has no effect on the one you’re listening to. The front‑panel switches on the G105 MkII work as advertised.

All in all, then, I think these are excellent products which are very nicely designed for their intended roles. In a studio context, a headphone amp needs to be able to put out a wide variety of levels even if you’re only using one type of cans. One day you might be checking mixes and masters in the control room; the next, you might be trying to feed an unmastered guide vocal to a loud drummer. These G‑series amps offer enough range for both even before you start tinkering with the pre‑gain settings, and these only add to their versatility. In fact, if I have a criticism, it’s that this potentially very useful feature should be more accessible. I suspect most users would rather have the volume control in a non‑optimal setting than have to unplug the unit from the mains and remove four rather fiddly bolts in order to open the case and access the jumpers.

If Lake People ever make a MkIII, perhaps they could bring pre‑gain out onto the front or rear panel? In the meantime, the MkII models are solid, good‑sounding and attractively priced devices that do exactly what they say on the tin.

These good‑sounding, no‑nonsense units do exactly what you’d want a studio headphone amp to do.