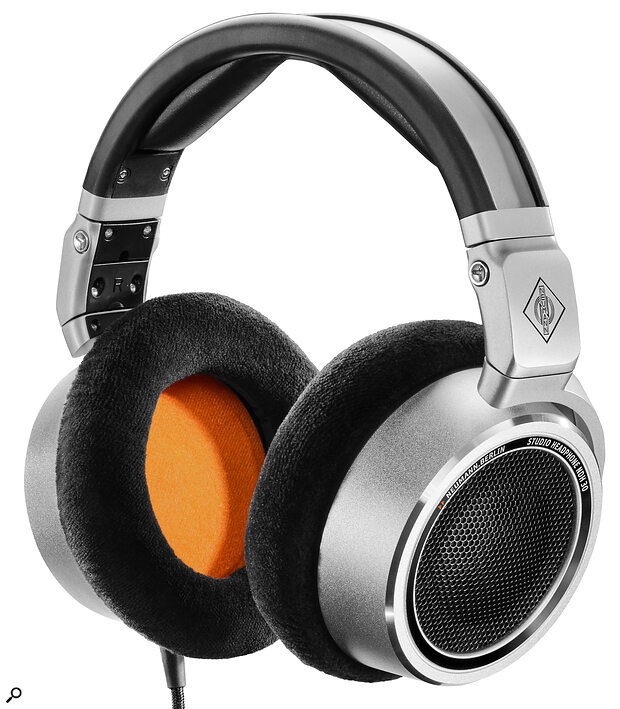 Can headphones really replace a high‑end monitoring setup? Neumann seem to think so...

There are many aspects of audio performance that can be measured, and the idea of manufacturer specifications is to guarantee that what you’re buying will measure a certain way. Some of these specifications are more important than others, and in the case of both microphones and monitoring systems, it’s easy to get hung up on frequency response as the be‑all and end‑all of performance. But is it?

When Neumann launched their first‑ever pair of headphones, they came with an unusually comprehensive list of specifications. And although I was initially a bit surprised by the way they sounded, I eventually decided that this was probably the result of prioritising other factors as well as frequency response. The closed‑back NDH 20s are purposely designed as a studio tool, and in this role, Neumann evidently felt that good isolation and low distortion were just as important. So, although the NDH 20s are neither subjectively flat nor flattering to source material, they are an excellent analytical tool for the serious engineer (and can easily be equalised to make them flat, if that’s what you want).

Three years on, Neumann have followed up the NDH 20s with a second model. The NDH 30s are physically identical in most respects to the 20s, but with one key difference: they are open‑backed. It’s generally accepted that open‑backed phones have the potential to sound ‘better’ than their closed‑back brethren — but what does that actually mean in practice? In the case of the NDH 30, it seems that the aim has been to retain the low distortion of the NDH 20, but to linearise the frequency response. Or, as Neumann put it, “The NDH 30 was developed with the aim of making the reference sound of a Neumann studio monitor setup, perfectly calibrated via MA 1 [Neumann’s monitor alignment system], available everywhere in the form of an easily transportable headphone.”

The NDH 30s appear to use exactly the same physical design as the NDH 20s, with the obvious exception that the rear side of the earcups is porous. As before, the earcups are unusually large and perfectly circular, and perhaps not quite as comfortable as those of some rivals. Once again, the locking 2.5mm TRRS jack connects to the base of the right earcup rather than the left, as it does on most headphones. Only a single, straight cable is supplied this time around; and, as with the NDH 20s, you get a soft carry bag but not a proper case.

When it comes to audio specifications, however, there are some obvious differences. Open‑backed headphones are usually less efficient than a closed‑back version of the same design, because up to half the sound is being lost through the rear sides of the earcups. However, the difference is unusually pronounced here, and whereas the NDH 20s will deliver 114dB SPL for a 1V RMS input at 1kHz, the 30s are a full 10dB down, at 104dB SPL. Their nominal impedance is also slightly lower, at 120Ω rather than 150Ω.

Neumann don’t publish frequency response plots for either model, but quote upper and lower limits of 34kHz and 12Hz for the NDH 30s. Without any tolerances, these figures are of limited value, and I doubt anyone will notice the differences compared with the NDH 20s’ alleged 7Hz‑30kHz bandwidth. What may be more noticeable is that the NDH 30s improve significantly on the NDH 20s’ already impressive distortion figures, taking THD from below 0.1 percent for a 1kHz input at 100dB SPL, to less than 0.03 percent.

The NDH 20s have a distinctive tonality, which is noticeably shy in the 2kHz area and rather fuller in the lower midrange. Superficially, this can make them sound heavy and lifeless on some material, and there are other closed‑back phones that seem to me more neutral — but, I should reiterate, the NDH 20s are intended as a tool, not to maximise listening pleasure, and this character probably reflects a pay‑off on the design front between linearity, low distortion and isolation. Neumann make much stronger claims regarding the linearity of the NDH 30s, as evidenced by the aforementioned quote about matching a calibrated Neumann speaker system. Interestingly, they say this linearity is achieved partly through the use of frequency‑selective absorbers to “eliminate the overemphasis in the high frequencies that leads to incorrect mixing decisions in many other headphones”.

Whatever they’ve done, it’s worked, because these headphones sound really, really good. I’d agree with Neumann that the large majority of moving‑coil headphones exaggerate the high frequencies — violently so in the case of many cheap closed‑back models, and more subtly in, for example, AKG’s high‑end open‑backed cans. The NDH 30s absolutely don’t. In no way are they ‘dark’, but there’s no suggestion that they’re adding any artificial detail or air to the sound. Less good headphones sometimes make it seem as though vocal sibilants or tambourine hits are triggering splashy resonances; here, they’re just presented in a dry, matter‑of‑fact, informational way.

I was also seriously impressed by the bass. The 100‑150 Hz region is slightly forward, and the sub‑bass not quite as earth‑shaking as the best planar magnetic phones can achieve, but it’s deep, clear and articulate. Kick drums and bass guitars can be distinguished even in the muddiest mix, and overall, the low end here is up there with the best I’ve heard from any moving‑coil design. In the midrange, meanwhile, the 2kHz suckout that takes some getting used to on the NDH 20s is almost completely gone. Comparisons with other phones sometimes suggest that a slight softness remains, but you quickly adapt to it, to the point where the NDH 30s challenge you to think that the other headphones are overdoing things in that region. Whereas I wouldn’t choose the NDH 20s for casual listening, the 30s present music in a way that’s enjoyable as well as revealing. 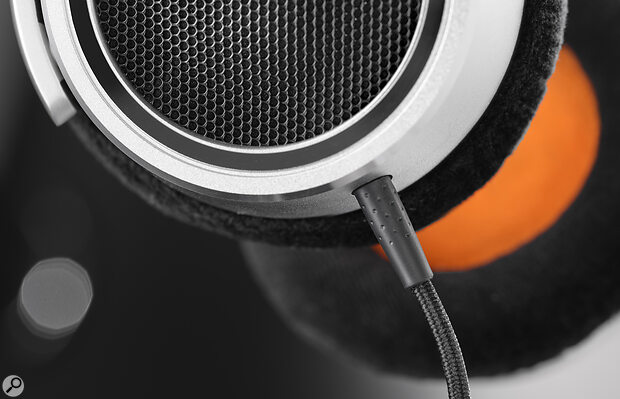 The NDH 30 is almost identical to its closed-back sibling the NDH 20, apart from the perforations on the outside of the earcups.

For many years, my benchmark for neutral sound from an open‑backed pair of moving‑coil headphones, at least without paying silly money, has been the Shure SRH1840. The NDH 30s offer a slightly different take on neutrality, with more low‑mid heft, and a more controlled upper midrange. The Shures have a considerable edge in terms of comfort, and with a gun to my head, I’d probably still say that they are subjectively a little closer to being ruler‑flat.

Yet the more I listened to the NDH 30s, the more I felt that they should displace the Shures at the top of the heap. Perhaps it’s the exceptionally low distortion, but there’s something about the sound that relaxes your ears and makes you feel that you’re listening to music, not to a monitoring system. In fact, I’d go so far as to say that I suspect their vestigial softness in the upper midrange might simply represent unaccustomed clarity, rather than a real dip in the frequency response.

The NDH 30s are not cheap, but they are highly impressive — and a lot more affordable than a speaker‑based monitoring rig of the same quality! If you’re in the market for a serious pair of open‑backed headphones for mixing, you owe it to yourself to try them out.