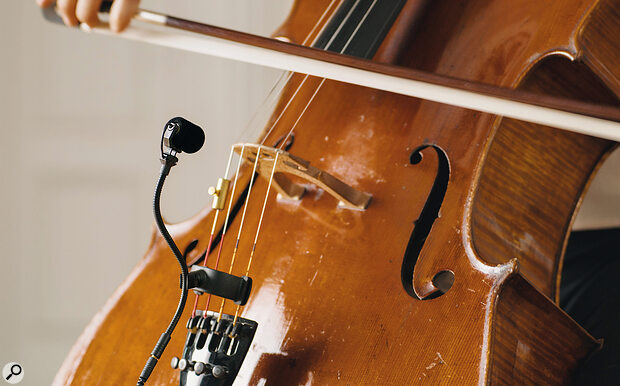 Neumann’s first ever pre‑polarised mic is designed to reach the parts where their other models won’t go!

Founded in Berlin, Germany in 1928, Neumann built their considerable reputation on valve‑based capacitor microphone technology. The company’s first product, the CMV3 ‘Bottle’, was the world’s first commercially successful capacitor microphone, and Neumann continued to blaze a path in that product category, producing iconic microphones that formed the bedrock of the post‑war recording and broadcast industries. Although Neumann began manufacturing solid‑state microphones in 1965, the company continued to focus on producing externally polarised ‘true capacitor’ capsules, resisting the siren call of the electret approach — until now.

The Neumann Miniature Clip Microphone System (MCM, for short) comes equipped with the company’s new KK14 cardioid capsule, and marks Neumann’s first venture into the electret capacitor market. Given its form factor and range of mounting accessories, the MCM would appear to have been developed by Neumann in order to target the premium end of the instrument‑mounted miniature microphone market — a niche that has expanded considerably since the launch in 2009 of the original DPA 4099 and which, since then, has been dominated by that microphone and its 2018 successor, the DPA 4099 Core.

As with living organisms that occupy similar ecological niches, microphones intended for similar uses are the products of convergent evolution, so it is no surprise that Neumann’s MCM echoes the original DPA 4099’s combination of capsule, gooseneck, output cable and detachable phantom‑powered preamp, allied to a selection of instrument mounts and output options.

However, unlike the myriad imitations that have been ‘inspired by’ Neumann’s classic valve microphones, the MCM brings something new to the party by separating the capsule, gooseneck and cable into their constituent parts. The capsule housing unscrews from the gooseneck, the gooseneck unplugs from the output cable which, in turn, unplugs from the MCM100 preamp (or ‘output stage’ in Neumann‑speak) that comes as standard with every MCM. With a nod to Sennheiser (who have owned Neumann since 1991), the output cable supplied as standard with every instrument‑specific MCM terminates in a mini‑TRS jack plug with locking collar that not only connects to the MCM100, but also offers convenient direct connection to Sennheiser’s EW and XSW ranges of wireless transmitters. Optional output cables terminating in Lemo, microdot and 4‑pin mini‑XLR connectors are available as accessories. Although this modularity adds expense to the initial MCM purchase, it does come into its own further on down the road by adding the ability to replace just the damaged or broken part, rather than forcing the user to buy an entire new microphone and cable. This level of modularity is something that DPA have previously adopted with their 4000 CORE series, and it undoubtedly will increase the attraction of both systems to PA and hire companies, for whom having to replace damaged microphones is a fact of life.

The male and female connectors that make up the gooseneck/output cable joint are a bit of an innovation in that they are designed both to hold together securely, and to pull apart to avoid damage to an instrument (or the cable) if, for example, the performer trips over the cable or walks off without unplugging it. An ingenious plastic clip is supplied that locks the connectors together should a secure connection be preferred.