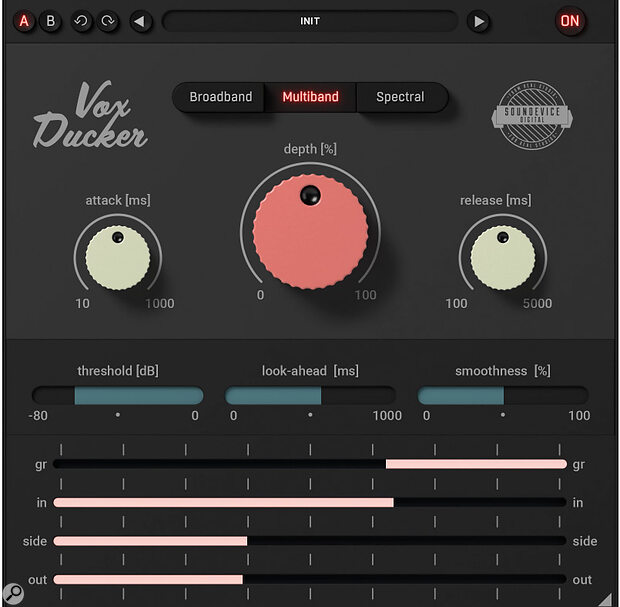 Voice‑controlled ducking is usually accomplished by feeding a compressor’s side‑chain (its control circuit) from the voice track while routing the music though the compressor. Thus the compressor acts on the music when the vocal exceeds its threshold, while the music remains at its normal level at other times. This approach is really useful for podcast/radio‑style productions, but can also work in mixing contexts, for massaging the relationship between a kick drum and bass, or for ducked reverb and delay effects, among other things. But for those who are less experienced with setting up compressors it can also be a little fiddly to set up. If only there were a plug‑in that made life easier...

Available from United Plugins, VoxDucker not only aims to make the process more intuitive, so that podcasters and the like can get consistently good results, but it also offers three modes of operation that make it useful not only for voiceover work but also for allowing one instrument in a mix to stand out, without the ducked elements sounding over‑processed. For example you can use it to deliver more natural results when using the bass to duck drums: normally if the bass is in control and the attack time is set to fast, drum attacks might be suppressed, but using the more advanced frequency‑dependent modes here, transient detail need not be lost. Processing is at 64‑bit, at any sample rate, and VoxDucker works with any DAW that supports side‑chain inputs.

A smart bypass avoids clicks and compensates for latency, so that there’s no timing offset when activating bypass. The plug‑in also detects whether it needs to perform processing at all, so if it comes to an empty section of a track it enters sleep mode to conserve CPU resources. Future updates to the plug‑in are free for life and, because of the friendly authorisation system, the plug‑in can be used on several of the owner’s computers at the same time, without restriction.

There are just three main controls, for setting the attack and release times and the depth of ducking. Three further sub sliders then allow the user to set a threshold, a look‑ahead time, and to adjust the smoothness of the processing by gradiating the dynamic response around the threshold point with a soft knee. The signal that controls the ducking is fed in via a side‑chain input in the usual way. Large meters show the input and outputs levels as well as gain reduction and the side‑chain level. The only feature I feel is missing here is a draggable threshold line in the side‑chain input meter; that would make it easier to set up the point at which ducking comes into play. I’ll be keeping my eyes peeled for that in future updates!

Spectral mode ducks only those frequencies present in the actual voice (or other side‑chain input) signal.

Broadband mode works much like a basic side‑chained compressor, so that the vocal causes the whole level of the backing track to drop to make space for the vocal. Multiband mode splits the music path into six frequency bands, tuned so as to respond appropriately for most voice types. This preserves more of the backing music in areas that don’t overlap with vocal frequencies.

Spectral mode does a similar thing but ducks only those frequencies present in the actual voice (or other side‑chain input) signal. As you might expect, Spectral takes a little more CPU overhead and also introduces more latency, though if the plug‑in is used only when mixing, the extra latency will not be an issue. Spectral mode proved to be very effective for lifting specific instruments out of a mix without drawing attention to the fact that the backing parts are being ducked. Multiband is less transparent than Spectral but still kinder to the backing music than Broadband mode.

Whether for voiceover work or for conventional music mixing, this plug‑in has a lot to offer and goes way beyond conventional ducking.

£51 including VAT. Discounted to £13 when going to press.