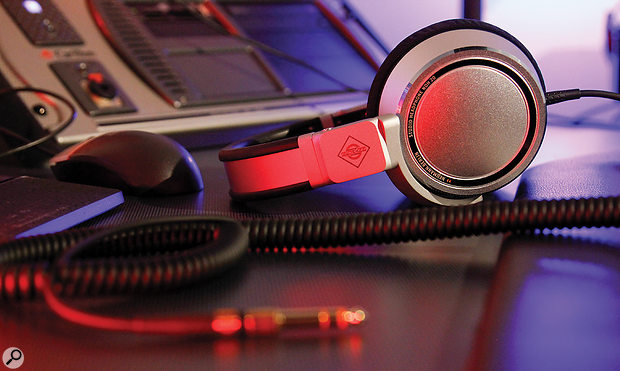 In the world of microphones, Neumann's reputation is unmatched. Does their first‑ever pair of headphones live up to the name?

In audio circles, the name Neumann will always be associated with microphones. Georg Neumann and the company he founded have done more than anyone else to perfect and to popularise the capacitor microphone, and it would be a brave commercial studio that tried to attract paying clients without having some Neumann classics in its mic locker. After all, it is widely and rightly recognised that the microphone is the most important part of the recording chain.

However, if there's one other part that rivals the microphone in significance, it's the monitoring system. No self‑respecting studio can afford to skimp in this area either, and in 2005, Neumann's parent company Sennheiser acquired German loudspeaker manufacturers Klein+Hummel. Four years later, the studio monitor arm of K+H was folded into the Neumann stable, and since then, there have been numerous loudspeaker releases under the Neumann brand. These have built on K+H's already strong reputation to develop a very highly regarded product portfolio.

Sennheiser themselves, of course, are also well known both for microphones and headphones, but until this year, the Neumann brand has never encompassed headphones. That has changed with the launch of the NDH 20.

Neumann has always been a premium brand, and their first headphones occupy a market niche that Sennheiser's range does not currently cater to. The NDH 20s are closed-back, over-ear, moving‑coil headphones that are intended to balance the sound quality necessary for critical listening duties against other factors that are important in a studio context, such as comfort, isolation and ease of maintenance. Price-wise, they sit well above Sennheiser's studio-focused models, such as the HD 380 and HD 598, but well below the flagship HD 820, targeted primarily at audiophiles.

The NDH 20s ship in a stout cardboard box lined with foam. The headphones fit snugly into cutouts in this foam, but although you get a soft leatherette pouch, there's no proper carrying case; nor do they fold into any very compact form for travelling. Physically, the NDH 20s are quite imposing, and noticeably larger than many other closed-back headphones. They adjust to the size of your head in a fairly conventional way, using notched extensions that slide in and out of the main headband to make it longer or shorter. Things get more unusual when you reach the hinges at the end of these extensions; most headphones attach the earcups at both front and back, but the NDH 20s have a single metal arm on each side that attaches only at the back of the earcup. This attachment offers enough freedom of movement in the vertical plane to accommodate most head shapes, while the hinges at the top of each arm rotate through 90 degrees to allow the earcups to be flattened in the plane of the headband.

The human outer ear is rarely circular, and in order to fit over it neatly and comfortably, most over-ear headphones have elongated or oval earcups. Not so the NDH 20s, which employ earcups that are almost perfectly round. The cups themselves are made of aluminium, and are about an inch deep, but the removable pads add another inch or so, making the whole structure pretty substantial. They're also comparatively heavy, weighing in at 390g without the cable, and build quality is as good as you'd expect from Neumann.

Like all the other manufacturers I can think of, Sennheiser locate their single‑sided cable entry ports on the left earcup, but Neumann, for some reason, have chosen the right. This, of course, is neither better nor worse, but the black-on-black lettering that tells you which side is which is quite unclear. The removable cables enter this port courtesy of a locking 2.5mm jack. Both straight and curly 3m cables are supplied, and both have a 3.5mm jack with screw-on 6mm adaptor at the other end. Unusually, both cables appear to be armoured, so they are thicker and a lot less flexible than most headphone cables. This will presumably ensure a long life, the down side being that any knocks and scrapes on the cable are transmitted acoustically to the earcups with a distracting effectiveness.

The NDH 20s boast the most comprehensive data sheet I've ever seen for a pair of headphones. Not only do Neumann publish standard specifications such as impedance, sensitivity, THD and frequency response, but they also list the amount of sound isolation on offer, the RAL colour codes of the various finishes used, and even the amount of contact pressure you can expect the earcups to apply to your head! This being the case, it's slightly disappointing to find that some of these specs aren't more useful. In particular, a stated frequency response of 5Hz to 30kHz is meaningless in the absence of a tolerance, while the figure of at least 34dB for sound isolation is less impressive when you discover that it only applies to frequencies above 4kHz.

With many people listening to music on mobile phones and laptop computers, manufacturers these days are careful to ensure that their headphones can be driven effectively by low-powered headphone amps. Broadly speaking, the acoustic level that a pair of headphones will produce in response to a given electrical input is a function of their sensitivity and their impedance. The more sensitive they are, and the lower the impedance they present, the more effectively they'll convert that electrical signal into acoustical energy. Most new headphone models therefore tend to have a nominal impedance of well below 100Ω. That of the NDH 20s is quoted as 150Ω, but they are also more sensitive than most, generating a quoted 114dB SPL for 1V RMS at 1kHz. They went plenty loud enough on every device I tried them with, with no discernible change in overall tonality (in contrast, headphones with very low impedance can be bass-light on low-powered amps).

The fact that Neumann publish a figure for isolation suggests that they see this as an important quality in a pair of studio headphones. That's certainly true for the sort of live-room workhorse phones you'd hand out to musicians, where good isolation is often vital for keeping click bleed out of the mics. At the price, though, it would be an opulent studio that invested in multiple pairs of NDH 20s for artist foldback!

The reason I mention this is that there is almost always a trade-off in headphone design between isolation and comfort, and that compromise is certainly in evidence here. On the one hand, the NDH 20s do indeed offer substantially better rejection of external sound, and containment of spill, than nearly all of the other closed‑back headphones I've tried. On the other, one quickly becomes conscious of the 5.6 to 6.8 Newtons of pressure that the NDH 20s reportedly exert on the sides of your head, and to me, at least, no amount of adjustment could eliminate the feeling that the earcups were pressing particularly hard on the sensitive spot just below the ear. If you have that opulent studio, or you do a lot of location recording, or you need to mix in noisy environments, you might well think that Neumann have got the balance right; but personally I'd be happy to trade some of that hard-won 34dB for a gentler fit.

I'll confess that it took me an unusually long time to make up my mind about these particular headphones, and that initially, I was underwhelmed. My first impression was that they sound rather unengaging, with neither the flattering boost in the air band that makes many headphones sound polished and slick, nor the mid-range push that brings rock & roll excitement to others. They have a tendency to foreground the 100-150 Hz 'upper bass' region, but not in a bootylicious Beats By Dre fashion; so, lacking the dynamic punch that you get on a good pair of planar magnetic headphones, and tending to recess the 2kHz area, they can present some material as sounding soggy and lifeless.

However, as I used the NDH 20s more for mixing and editing as well as for music listening, it began to dawn on me that there is a reason for all of this. What Neumann's engineers have done is to take seriously the goal of creating headphones specifically for studio use. This is absolutely not a hi-fi design repurposed with a new paint job and a different model number, but a tool designed from the ground up to meet the needs of recording engineers. Thus, as we've already seen, they've clearly put a lot of work into achieving the best possible isolation, even if that comes somewhat at the expense of comfort: and they've also put a lot of work into making them the most revealing monitoring system they can be, even if that doesn't maximise superficial listening pleasure.

The more I used them, for example, the more I appreciated that what I heard initially as a flat and unexciting sound is actually just the absence of distortion. It's not only that these headphones exhibit an unhyped tonality: they also possess a cleanness that is unusual in closed-back phones. In particular, their ability to lay bare problems in the lower mid-range is uncanny. When I took mixes that sounded good on both studio monitors and my usual headphones and played them on the NDH 20s, I found myself noticing resonances, unevenness and mud that I hadn't previously been aware of; and when I put the same mixes back on my other systems after EQ'ing them on the NDH 20s, there was a real improvement. Likewise, despite their relatively muted tonality, they proved a reliable aid to spotting vocal sibilance and other issues further up the frequency spectrum.

So, yes, the NDH 20s take some getting used to, but that's because they are so ruthlessly focused on what's useful rather than what's fun to listen to. And this is the quality that makes them pretty much unique. Other headphones that provide effective isolation, such as the classic Sennheiser HD25 II, rarely offer neutral tonality or a clean sound, while models that do major on sound quality rarely conceive of it in such analytical terms. There are high-end open-backed models that have a flatter frequency response, but open-backed designs have minimal isolation, and as far as usefulness goes, flatness is a means to an end rather than an end in itself. The headphone market is a crowded one, and these are not cheap, but Neumann have located a niche for a genuinely studio-focused design — and the NDH 20s fill that niche very successfully.

In their role as headphones designed specifically for the studio, it's hard to think of many direct rivals to the NDH 20s, but it's worth mentioning Avantone's MP1s, which offer a rather different take on the same concept.

During the course of this review, our friends at Sonarworks (www.sonarworks.com) measured the NDH 20s using their proprietary system, and were kind enough to share the results.

Graph 1 shows the measured frequency response of the NDH 20. No closed-back phones produce a completely flat response without equalisation, and in this case, there is a broad suck-out at around 2kHz, with some peaks further up the frequency range, and a general low‑frequency emphasis. The asymmetry between the left and right earcups is likely caused by the presence of a cable‑entry point in the latter.

Much more impressive is Graph 2, showing the NDH 20's total harmonic distortion. THD has been kept below 0.6 percent across the board, even at the extreme low end, where driver excursion is at its greatest.

The Neumann NDH 20s are described as 'studio headphones' for a reason. They're not flattering and they're not especially comfortable but, as well as offering excellent isolation, they are a highly effective monitoring tool.