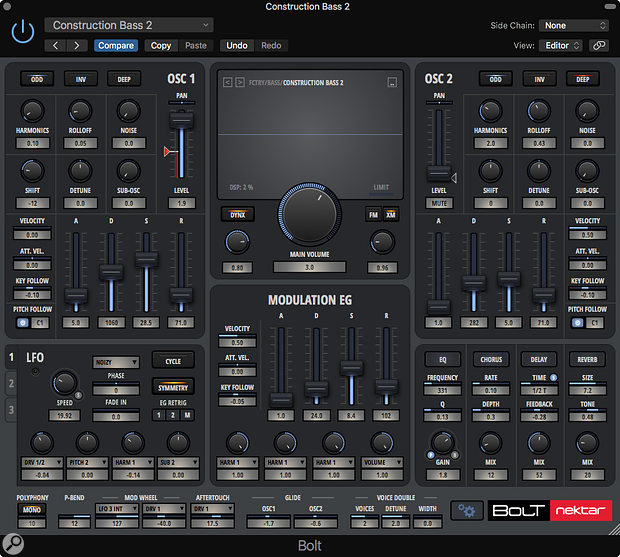 Hardware controller specialists Nektar turn their attention to software with the versatile and capable Bolt synthesizer.

Bolt is Nektar's first virtual instrument, and is available in both VST and AU formats. Its sound‑generation capabilities have much in common with additive synthesis, but rather than combining the outputs from multiple oscillators, Bolt has just two main tone oscillators, which compute the wave make‑up in advance and allow the harmonic content to be modified dynamically. The effect of an analogue synth's filter can be recreated by changing the harmonic balance of the waveform as the note develops. FM operation is also possible, so as you might imagine, the sound palette covers both smooth analogue and more metallic FM-style timbres.

Once installed, it is apparent that the GUI is set out quite logically with everything on one page — other than tabs in the lower left-hand corner of the window to access three separate LFOs and a separate panel for the limiter. Sound shaping within each oscillator can be controlled by an ADSR-style modulation envelope and via various LFO waveforms, and if FM is activated, oscillator 1 is modulated from an independent sine‑wave oscillator set to a pitch of -12 semitones.

There's also a cross‑modulation option, whereby oscillator 2 acts as the mod source for oscillator 1. This makes more complex FM possible. Either oscillator can be bypassed so you can audition the other in isolation, and both oscillator sections are equipped with identical controls. The master section, which also incorporates the display, has a large main volume control, selector buttons for FM or cross‑modulation, and a DYNX switch, both accompanied by a variable rotary control. Clicking on the display alternates between waveform and spectrum views. Switching on DYNX makes things sound brighter and louder at higher Harmonics settings, while turning it off produces a more consistent sound level. Faint text areas in the display show DSP usage and also allow the limiter section to be opened and adjusted.

The three buttons at the top of each oscillator section affect the way the waveform is generated. If Odd is active, only odd harmonics are generated. Inv inverts the oscillator output, which will affect the way it mixes with the other oscillator. Deep adds a low boost and also softens the sound, enabling approximations of analogue-style square or saw waves to be generated depending on whether Odd is engaged or not. Harmonics determines the oscillator's harmonic complexity, adding more harmonics as the control is moved clockwise. This is somewhat analogous to an analogue synth's filter cutoff control. Rolloff also affects the harmonic content such that there's a reduction in level for each higher harmonic, so juggling the Harmonics and Rolloff controls provides a lot of control over the make‑up of the waveform.

Noise adds white noise to the oscillator waveform, and when turned right up you get noise only. Harmonics and Rolloff also affect the noise timbre and when Pitch Follow is on, the noise filter tracks the keyboard notes. Shift adjusts the oscillator Pitch by ±36 semitones and Detune offers fine control up to ±50 cents. Sub adds a sub octave, the harmonic content of which changes if you activate the DYNX button below the display. Overall control for the oscillator is via a volume slider, above which is a pan control. The movable triangle alongside the fader brings in drive-style distortion.

Conventional ADSR envelopes determine the amplitude for each oscillator, and the attack time and level can be modulated via the mod section below the display. The Modulation EG section features its own ADSR generator along with multiple selectable modulation targets, each having variable amounts via the four controls below. Modulation can also be influenced by Velocity, Attack Velocity and Key Follow. Modulating the Harmonics and Rolloff parameters from this envelope produces pseudo filter-sweeps, though you could choose to modulate LFOs, pitch, detuning, volume or other variables. Key Follow adjusts the decay time according to pitch. Attack can also be modulated via note velocity.

So far so good, but the LFO sections are also instrumental in creating sounds with movement — not that they are restricted to low‑frequency operation, as they stray a long way into the audio range. There are three identical LFO sections selected via the tabs at the bottom left of the screen, each offering a choice of 13 variable‑symmetry waveforms covering the 0.01Hz to 10kHz range. These can be assigned to four modulation targets via drop-down menus showing 24 possible destination choices. In addition to free‑running (Cycle), the LFOs can be set to one‑shot, retrigger or MIDI sync, and the depth can be faded in rather than acting from the start of each note.

Bolt has its own effects section, offering a single band EQ, chorus, delay (with tempo‑sync options) and reverb, each with two adjustable parameters plus a gain or mix control as appropriate. The reverb settings actually adjust a number of variables at the same time, so there's more creative scope than you might imagine. Running along the bottom of the screen are what might be termed general or global parameters such as mono/polyphony control, pitch-bend range, mod‑wheel assignment, aftertouch assignment, portamento and voice doubling with variable detuning.

Certainly the way this synth has been designed to put all the key controls on a single, clearly set‑out panel is impressive. In fact at first glance it looks as though the end result could be quite limited in scope given the limited number of controls, but checking out the multiple modulation options will soon disabuse you of that notion. Bolt comes with a huge number of presets that demonstrate the sonic range of the instrument, and what soon becomes apparent is that the analogue‑style sounds of which this synth is capable sound extremely smooth and rich. You might even say 'very analogue'. All the familiar lead and pad sounds are available, along with some hefty basses where the layering, detuning and chorus options add a very real richness to the sound. Bolt is also an excellent source of synthetic string sounds.

Stray into FM or cross‑modulation territories and you are greeted by a very different set of timbres with all the metallic overtones you might expect, covering both familiar FM 'bells and electric piano' fare alongside some far more aggressive offerings.

As with analogue and FM synths of old, you wouldn't choose Bolt for its accurate emulations of traditional instruments but rather for its unashamed 'synthiness', and there's plenty of that to explore. If you don't want to dive into creating your own sounds from scratch right away, the factory sounds cover just about every sound type you can expect to squeeze from this synth, so tweaking the existing patches is a good way to get started. Bolt offers plenty of scope for EDM styles, but its gentler side is also a good fit for more subtle genres, so whatever your musical direction, it is definitely worth a closer look.

Bolt covers a wide range of analogue and FM style sounds via a clearly set‑out GUI.