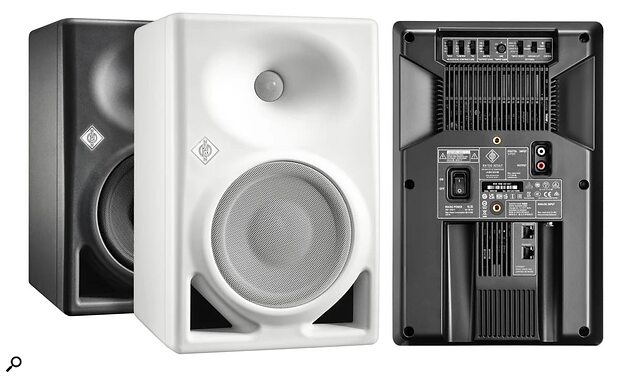 Neumann’s range of active monitors, from the diminutive KH80 to the much more substantial KH420, have long been admired by Sound On Sound reviewers and readers alike. But there has always been a gap in the Neumann range between the compact two‑way KH120 and the significantly larger three‑way KH310. It’s a gap that I suspect has long frustrated those aspiring Neumann monitor owners for whom the KH120 doesn’t quite meet bandwidth and volume level needs, and the KH310 doesn’t fall within budget. That gap has now been filled by the subject of this review: the KH150.

The KH150 and MA 1 is as near to flawless as I’ve heard compact nearfield monitoring get.

You can’t really mistake a Neumann monitor for any other brand, and the KH150 follows the established industrial design style closely. In fact, without something to provide scale in photographs, it’s not easy at first glance to tell the difference between the KH150 and the smaller KH120. Under the skin, however the KH150 is significantly more advanced technically, and offers an even more ambitious level of electro‑acoustic performance. 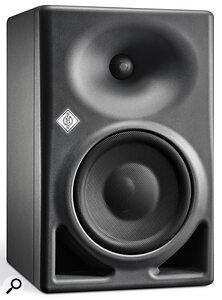 The KH150 is a relatively compact two‑way monitor of comfortable nearfield monitoring dimensions, and it combines a nominally 165mm bass/midrange driver with an elliptical‑waveguide‑loaded 25mm tweeter. The enclosure design incorporates softened edges and a smoothly integrated waveguide that will help minimise the response aberrations that can be caused by diffraction from sharp edges. The enclosure is constructed from composite polycarbonate front and rear mouldings with a wooden carcass, and finished with a textured paint. Dark grey and white options are available. In the context of multi‑channel monitoring environments, mounting facilities are becoming a significant issue, and the KH150 enclosure usefully incorporates M6 threaded inserts on its rear panel for this purpose.

As well as the two colour options, the KH150 is also available with two different sets of connection facilities. The standard KH150 offers just conventional balanced analogue and S/PDIF digital inputs, while the KH150 AES67 offers AoIP (Audio over Internet Protocol) network connectivity compatible with AES67‑compliant protocols such as Ravenna and Dante.

Downstream of its inputs, and following 48kHz/24bit A‑D conversion (for the analogue inputs), the KH150 incorporates amplification rated at 145 Watts for the bass/mid driver and 100 Watts for the tweeter. The 48kHz internal sampling rate might sound limiting in today’s world, but Neumann explain that this is a choice driven by tweeter performance. All tweeter diaphragms reach a frequency where they will enter a resonant break‑up mode and even if, as is said to be the case with the KH150 tweeter, the break‑up frequency is above audibility, break‑up intermodulation distortion effects can appear in the audible band. So it’s beneficial, say Neumann, not to drive tweeters to break‑up frequencies above audibility, and that means there’s little point in an internal sampling rate that would enable audio bandwidth to extend much above the high‑frequency limit of human hearing.

The KH150 uses a new and patent‑pending amplifier technology that, say Neumann, “combines superior audio performance with the energy efficiency of Class‑D”. Further research established that the amp topology incorporates some novel techniques that take driver impedance into account within the feedback strategy. Fundamentally, the KH150 amplifier technology takes advantage of the fact that the architecture of active speakers enables the driver and amplifier system to be engineered and optimised holistically, rather than as disconnected entities.

Perhaps of more immediate interest to users is what’s between the monitor’s inputs and its amplifiers, and that’s a whole load of DSP power aimed at optimising both the KH150’s inherent electro‑acoustic performance and its integration with listening‑room acoustics. One example of the former is a bass/mid driver limiting function that kicks in to stop diaphragm displacement exceeding ±12mm. This means, say Neumann, that overall bass/mid driver distortion is reduced because the usual need to engineer non‑linear mechanical limiting into the driver suspension is avoided. The DSP handles fine adjustment of individual driver responses to ensure no more than ±0.8dB divergence between any two monitors, and it also facilitates the KH150’s fourth‑order crossover filter slopes and wide‑band phase correction. The latter ensures, say Neumann, that the KH150’s phase response remains within ±45 degrees between 105Hz and 16kHz.

So the KH150 is very much a monitor of the DSP age and while, as I’ll describe further down, there’s much also to write about in its traditional electro‑acoustics, it wouldn’t be half the monitor it is without those audio digits getting processed. 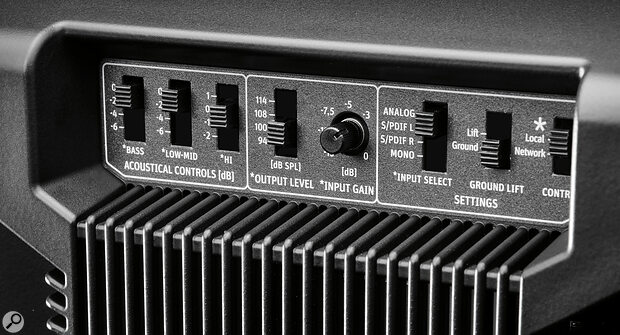 When it comes to user‑accessible elements of the KH150’s DSP, there are effectively two modes of operation. The first is local control, in which the KH150 operates as a conventional active monitor with a variety of rear‑panel switches adjusting input selection, ground lift, local or network control, input sensitivity and gain, and three EQ bands. The EQ offers 0dB to ‑4dB of low‑frequency adjustment, 0dB to ‑6dB of low midrange adjustment (centred around above 200Hz), and +1dB to ‑2dB of high‑frequency adjustment. However, the KH150 is also fully integrated with Neumann’s MA 1 monitor alignment technology, and the second mode of operation sees MA 1 deployed to enable both TCP/IP network‑based monitor configuration and measurement‑driven room optimisation.

The MA 1 package comprises an individually calibrated measurement microphone and a Mac/Windows‑compatible analysis and control application. The measurement microphone, as might be expected from Neumann, exudes a sense of engineered precision, and the app looks suitably professional and inspires confidence. The app is also intuitive in use and demands very little in terms of time and effort. What it does demand, however, is that, while the optimisation process is underway, the monitors are connected to the same TCP/IP network as the computer to be used. In most cases this...