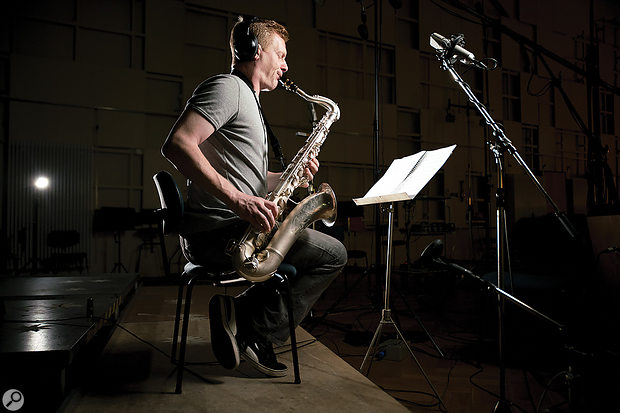 While Britain beats its breast over Brexit, our fellow Europeans get on with their lives. Beavering away in Berlin we find the Orchestral Tools symphonic sampling team, who in typical industrious fashion announced two major new libraries at a time when most of us were stockpiling booze and preparing to put our feet up for Christmas. The first of these titles extends the company's successful Metropolis series with an array of fresh orchestral colours, while the second, Glory Days Big Band Horns, represents the company's first venture into the world of big band jazz. In this review we'll take a listen to both collections.

Continuing Orchestral Tools' sampled tribute to the visionary 1927 silent film, Metropolis Ark 4 (MA4 for short) builds on the legacy of its predecessors. These were reviewed in SOS in September 2016, October 2017 and May 2018 respectively. To give you a brief overview, MA1 focused on epic, oversize sections, MA2 on darker, quieter (but still monumental) timbres, while MA3 (subtitled The Beating Orchestra) provided a large contingent of taikos, low drums and timpani along with some seriously powerful strings, brass and woodwind sections.

Prior to the unveiling of MA4, Orchestral Tools users speculated on its contents. Some hoped for a full-blown choral collection; others dreamed about ethnic, action, aleatoric and phrase-based themes. In the end, it was none of the above — subtitled Elite Orchestral Forces, MA4 consists of chamber-sized string sections, blended wind ensembles, small male and female choirs and a selection of tuned and unpitched percussion and drums.

The accent in this collection is on extreme dynamic range and forceful, aggressive articulations which will supercharge an arrangement. At the same time, an imaginative set of wind blendings (some of which combine woodwinds and brass within the same section) add unique new timbres to the orchestral palette. Recorded at the Teldex Scoring Stage from identical mic positions as the rest of the series, MA4 (48.1GB installed) runs on Kontakt 5.8.1 and above, and also works with the free Kontakt Player.

The small string ensembles recorded for MA4 are a potent weapon optimised for cutting-edge attack. New articulations such as 'power sustain' and 'power legato' add an extra aggressive layer to the front of long notes; the confrontational attitude reaches its zenith in the 'overpressure' deliveries, some of which sound like the players are sawing their violins in half. An enjoyably violent musical experience, best reserved for moments of high drama.

More standard articulations include hard, abrupt martelé (literally 'hammered') sustains and terrific, quick, powerful and precise staccatissimos, both of which will impart zip and definition to rhythmic ostinatos. An alternative short-note style, originally introduced in Orchestral Tools' Berlin Strings, is 'blurred staccato' — to add realism, this deliberately introduces the kind of variations of intonation which occur naturally in very fast runs. 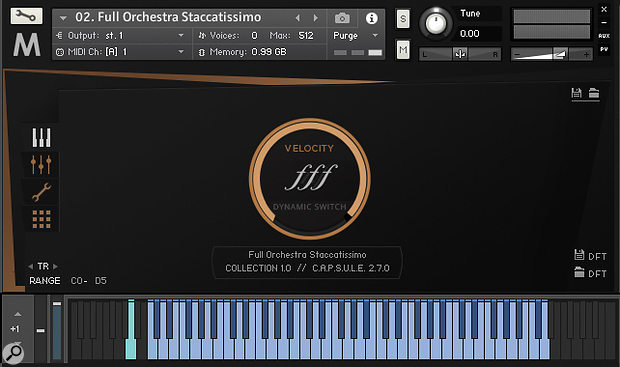 MA4's strings dispense with standard, polite-sounding pizzicatos and substitute col legno bow hits which switch to the percussive Bartok 'snap pizzicato' at higher velocities. Other iconoclastic deliveries include ricochets, octave rips (a fast, flam‑like 12-semitone leap which sounds huge when played chordally), intensely dramatic sul ponticello semitone trills, and short trills of up to a major fifth interval which, courtesy of the built-in 'Trills Orchestrator', automatically sound when you play two notes together.

Dynamics are a strong point: depending on your touch, the staccatissimos' timbre ranges from gentle to fierce, while the excellent 'sul pont accented tremolo' patch delivers a massive, scary and shuddering volume surge when you push up the mod wheel. Also included are some unusual and ear-catching played dynamics: short crescendos create an exciting 'zoom' effect, while the long diminuendos incorporate a scintillating, fast 'bouncing' bowing.

The high, mid-range and low strings play virtually identical articulations: the mid guys perform nice dark, moody power legatos and great staccatissimos, while the low strings' power sustains are tremendously strong. My only beef is the low strings' octave voicing: granted it's a classic orchestral bass line sonority, but when continued up into the higher register, the double bass' lower octave muddies up mid-range chord voicings.

MA4's Settings view allows you to turn a patch's dynamic layers and round‑robin samples on and off.

Another minor issue are the prominent bow noises heard in some sustains, the result of the players using a vigorous repeated re-bowing to elongate notes. Designed for maximum energy and intensity, these sounds may nevertheless be distracting when exposed — however they're not apparent when you play chords.

It's fair to say that while not romantically inclined, MA4's string sections are highly versatile, combining a combative attitude with an expressive ppp-fff dynamic range. You can use them on their own, or layer them with bigger sections (such as those in MA3) to add aggressive attack. Overall, a welcome addition to the Metropolis range.

The makers' orchestration know-how is nicely demonstrated in MA4's 10 new wind sections. One that caught my ear is the flute, English horn and muted trumpet trio; tightly played and nicely in tune, this unusual combo gives the impression of a larger section while occasionally exhibiting exotic, somewhat Eastern overtones. The players' staccatos sound great (particularly when played chordally), and their octave rips and glissandos are strong and wonderfully colourful. Though the trumpet tends to dominate at louder dynamics, the overall blend works well.

Another interesting woodwind and brass pairing is bass clarinet and muted bass trombone. Higher notes resemble a saxophone, while the low register sounds like some unidentified medieval wind instrument or rich-toned harmonium: a unique and playable sonority you can use for bass lines and legato melodies. In a similar vein, bass oboe and basset horn resemble blended clarinet and oboe on first listen — neither of these rare instruments quite comes out on top, and their collective angular, hybrid sound and low register are extraordinary.

A more traditional timbre is the classic combination of flute and piccolo. Played an octave up, the latter adds a silvery edge to the breathy flute, evoking rural scenes, lonely goatherds and windswept mountain tops, and the duo's emphatic 'overblown' patches work well for accents. The flute, oboe and clarinet trio's samples are also nicely played, albeit with a few instances of dodgy tuning. In the brass department, the noisy neighbours of trumpet and muted trumpet contribute bright attacks and blaring loud notes. On the down side, the sharp tuning of some of their staccato martelé notes may require intervention.

One of MA4's stand‑out sounds is its brass section of French horn, tenor trombone and Wagner tuba (mispronounced 'Waggner tube' in the walkthrough video). The players produce a fat, noble, horn-like timbre with a tonal span from soft, warm and brass-band-like to bright majestic fanfares. At the low end, a bass clarinet, bass saxophone and cimbasso perform well-tuned, menacing and powerful pantomime-villain deliveries, while down in the pitch sub-basement, contrabassoon, euphonium and contrabass tuba provide a huge bottom end to MA4's splendid wind sections, blasting out their gargantuan staccato martelé trumps (if I can still use that word) with gusto.

Though not comprehensive, MA4's choirs and percussion cover a fair bit of ground. The soprano female choir sing sustained 'ahs' with little or no vibrato in an appealing, plain and unaffected style. By contrast, the baritones utilise a frighteningly intense operatic wobble on their loudest notes, but get in touch with their feminine side on some quiet, tender 'mm' and 'ooh' high notes. The men also demonstrate their theatrical range with some lusty octave rips. Both sections' power legatos are suitably vigorous: the women pump up the vibrato, while the men turn into enraged Vikings. All good stuff for histrionic arrangements. 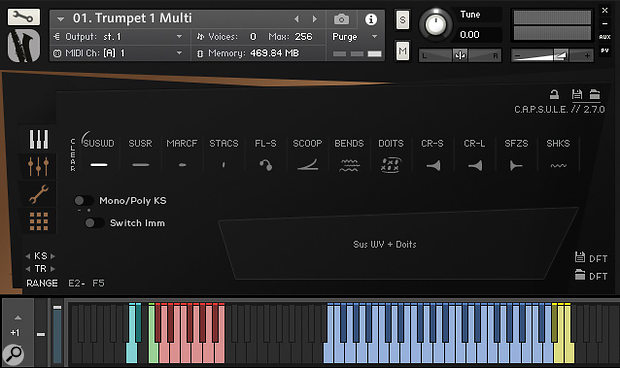 Multi-articulation patches hold up to 12 user-configurable styles — you can add legato transitions to any or all of them.

The choirs' so-called 'shouts' are actually tuned syllables of one or two seconds duration, offering utterances such as 'broh' (with the classical rolled 'r'), 'shreh', 'too', 'bree', 'ha', 'ki' — useful for constructing virtual words, but since the syllables are presented in a round-robin sequence rather than assigned to keyswitches, that's not straightforward. When it comes to the relatively easy task of singing 'ooh', the men go wildly off script and sing 'werl' on one of their bass notes. I'm still trying to figure out how that happened.

Moving on to MA4's percussion, I enjoyed the exotic, rich low register of unison marimba, xylophone and piano — applying mod wheel to their tremolos creates amazing thrumming crescendos. For low-end wallop, there's a tuned timpani and toms ensemble (which adds the thump of rock drums to the grand symphonic boom of the timps), three unison kick drums with various degrees of flam, and a low drums patch apparently consisting of taiko and tam tam, which unfortunately plays only short damped notes.

Augmenting these thundering drums is a selection of metallic noises: orchestral bass drum, anvil and thundersheet (whose cataclysmic crescendo roll would go well with the final chord of an epic heavy metal thrash), 'Metal 1' (which sounds like piatti cymbals and anvil) and 'Metal 2', a melodious, clangy anvil-like tinkle which could make a good gamelan patch if pitch‑mapped.