Emerge is not one of those ‘coffee shop ambience, birds tweeting’ collections of sound effects, but rather a huge collection of overtly processed sounds divided into categories and then subcategories for use in contemporary soundtrack composition. All the sounds are presented as 24‑bit WAV files, so you can import them into a sampler or use them as they come. 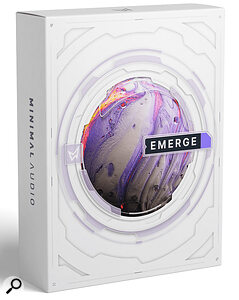 The main folders are named Organic One Shots, Impacts, Textural Mutations, Atmospheres and Future Synthetics. Look inside Organic One Shots and you’ll see subfolders entitled Earth, Ice, Metal, Water and Wood. Earth is full of complex, short sounds, most having a fast attack to produce sci‑fi gun noises, metallic thuds and so on. Ice holds more of the same with, perhaps, a slightly colder character. The Metal sounds have more metallic overtones, while Water samples have a more fluid character. Wood offers some slightly darker, impactful sounds. Inside the Impacts folder, the Full Impact sounds are more weighty, often with longer tails and some with a mechanical character. Low Impacts offers sounds with more low end.

Textural Mutations includes folders named Earth, Metal, Water, Wood and Ice. The tonal leanings between sections are similar to those of Organic One Shots but the sounds themselves tend to be longer, lasting several seconds in some cases. The Water sounds are the most ‘liquid’, with treated recordings of flowing water being evident in many of them. Atmospheres offers Fire, Metal, Water and Wood. There are sounds with slower attacks, crackling flames, alien angle‑grinders, lava, bowed metal and so on, some lasting 20 seconds or more.

Finally, we have Future Synthetics, which is divided into Cinematic Basses, Radio Textures Synth Variants and UI Computations and Glitches. The basses have in common plenty of low end but that’s about all. There are Doppler‑style spaceship fly‑bys, mysterious machinery and dramatic swells, but nothing resembling a conventional bass sound. Radio Textures is further subdivided into Micro Static, Signal Ambiences and Static Ambiences. Micro Static offers short bursts of electronic sound, Signal Ambiences similar noises with longer decays and Static Ambiences some interesting crackle‑based sounds.

Many of the sounds have a similar character, allowing a scene to be supported consistently without having to repeat the same sound.

Synth Variants offers Stringed Resonances, Synth Swells and UI Resonances, the common feature here being a greater consistency of sound and pitch throughput the duration of the sounds. Inside the UI Computations and Glitches folder are four more subfolders for Data Computations, Micro Computations, NanoGlitch and Resonances. The Micro sounds are again short bursts, whereas the rest are several seconds in length. You’ll find FM‑style metallic edginess, glitchiness and granular sounds here.

Many of the sounds have a similar character, allowing a scene to be supported consistently without having to repeat the same sound. The majority are best suited to sci‑fi productions, though you may find some musical applications. Each sound effect is named, and my hat goes off to whoever sat down and thought up all those names.