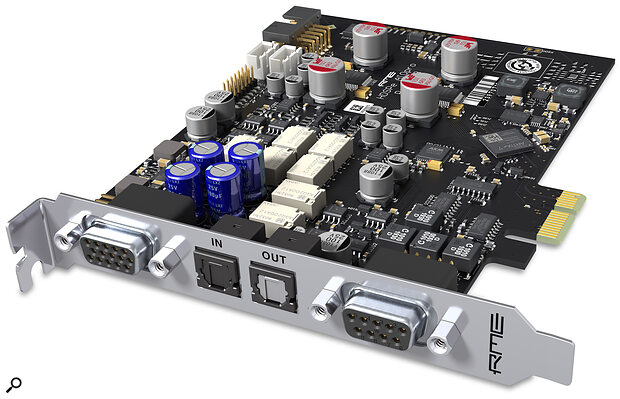 While external audio interfaces dominate the market and are probably the mainstay of RME’s product lines, the company has a long tradition of manufacturing internal sound cards too. I’ve been using the multiformat AIO card for 10 years now, and it has served faultlessly over that time as the core interface for my studio computer, hooked up to a Crookwood mastering console. The AIO card was actually a development of the original ‘Hammerfall’ DSP 9632 card which was designed for the PCI computer slot format, and the AIO was produced to conform to the then‑new PCI‑Express format.

Impressively, the HDSP 9632 is still available and still supported with up‑to‑date drivers, providing a multiformat audio interface with plentiful input and output connectivity: stereo‑balanced analogue in and out, eight‑channel ADAT light‑pipe (configurable for stereo optical S/PDIF) in and out, and both wired AES3 and S/PDIF in and out, plus a headphone output and 16‑channel MIDI in both directions. Optional analogue expansion cards are also available to add another four balanced inputs and outputs on TRS sockets. When added to the HDSP 9632 a total of 18 inputs and 20 outputs could be accessed simultaneously!

When the PCIe HDSPe AIO card was produced, all of the 9632’s interconnectivity was retained (although a revised version of the two analogue expansion boards was required), but RME took the opportunity to employ the latest converter and clocking technologies which improved the dynamic range of the analogue I/O by a couple of decibels from the nominal 110dB of the previous card to 112dB (unweighted) in the AIO.

Now, the venerable AIO card itself has been updated, with the new version christened the HDSPe AIO‑Pro. The physical format and the card’s own rear‑panel connectivity remain exactly the same once again, but RME have completely redesigned the board from the ground up to incorporate the latest technologies and developments introduced across the company’s other recent products.

Sadly, as part of that full make‑over the option to expand the analogue I/O count with additional four‑channel input and output cards has been lost. I can only presume that sales of AI4S and AO4S expansion cards were insignificant and a facility customers no longer require. Consequently, the AIO‑Pro is limited to just two channels of stereo analogue in and out, but that is still supplemented with ADAT (configurable as optical S/PDIF), plus wired stereo AES3 and S/PDIF, a stereo headphone output and 16‑channels of MIDI. All of the digital interfaces support sample rates up to 192kHz (using S/MUX for the ADAT connection, with pro‑rata channel count reductions).

However, what may have been lost in the potential quantity of analogue I/O has been more than made up for in quality as the new AIO‑Pro card uses the same high‑end converter chips — AKM’s ‘Velvet Sound’ AK5572 A‑D and AK4490 D‑A — that delivered a stellar performance in the ADI‑2 Pro interface (reviewed back in April 2017).

Of course, the achievable converter quality is inherently dependent on clocking stability, but that is ensured in the AIO‑Pro thanks to RME’s well‑proven SteadyClock FS system, first seen in the ADI‑2 DAC. This typically holds jitter levels below 1 nanosecond, where it is measured in terms of ‘femtoseconds’ — hence Steadyclock’s ‘FS’ appendix.

It seems that all of the AIO‑Pro’s analogue circuitry has been borrowed from the ADI‑2 Pro interface, bestowing this new PCIe card with truly professional interfacing‑level options (at long last). The previous AIO and 9632 cards usefully offered a range of analogue/digital alignment options (0dBFS = +4, +13 or +19 dBu) with the highest option providing compatibility with the EBU’s recommended professional alignment standard (0dBFS=+18Bu) — a sensible provision for a European manufacturer.

However, the American SMPTE’s recommended analogue/digital alignment calls for 0dBFS=+24dBu, some 6dB higher than the EBU’s standard, and consequently RME’s previous‑generation interface cards struggled to play nicely with a lot of professional analogue equipment, either by running out of headroom on the inputs, or failing to drive peak output levels high enough.

RME have now recognised this incompatibility issue and hence the new AIO‑Pro card, like the ADI‑2 Pro, includes an extra 0dBFS alignment option (+4, +13, +19 and +24 dBu) for the balanced analogue I/O — the highest setting now finally providing full interoperability with professional equipment. (When using the unbalanced I/O mode, all the alignment options run around 6dB lower, of course.) This additional alignment option is a very welcome one, and makes the AIO‑Pro suitable for a lot more professional applications that might have eluded its forebears.

Oddly, though, despite the AIO‑Pro’s enhanced professional credibility and capability, the card still ships with the unbalanced version of the analogue break‑out cable (the stereo analogue I/O appears on RCA‑phonos, along with the headphone output and MIDI connections). A balanced analogue I/O break‑out cable is available as a cost‑option, of course, but for competent DIY‑ers the relevant D‑sub pin‑out wiring for the balanced configuration is provided in the manual. The supplied digital break‑out cable provides S/PDIF I/O on RCA‑phono sockets and AES3 on XLRs.

Revised I/O levels and substantially improved converter specs aren’t the only useful updates to the AIO‑Pro’s analogue I/O. The new card also presents a higher input impedance (36kΩ instead of 10kΩ for the balanced inputs), while the output impedance is slightly higher at 75/80Ω (depending on output alignment) instead of 50Ω. That odd and changeable increase in output impedance is due to the use of automatically switched output attenuators in the AIO‑Pro which help to maintain the converters’ high signal‑to‑noise performance when operated with the lower analogue/digital alignment settings — something that was a weak point of the previous AIO card’s design.

Muting relays are now incorporated on all of the AIO‑Pro’s outputs (including the headphones) to ensure no clicks, plops or crackles manifest as the computer boots up or shuts down, and the headphone amplifier has also been improved. It is now capable of delivering +19dBu (6.9Vrms) into phones over 150Ω in the high‑power mode, or +7dBu (1.7Vrms) into low‑impedance phones (16‑100Ω) in the low‑power mode. The maximum output power is specified as 730mW per channel into 32Ω phones, or 160mW per channel into 300Ω phones, and the output impedance has also been reduced from 30Ω in the AIO card to a ‘near zero’ 0.1Ω in the AIO‑Pro which is said to improve the distortion figures.

Although RME no longer provide paper manuals or driver CD‑ROMs with their boxed products, both are easily available from their website. Installation of the PCIe card is completely straightforward, both physically and from a software point of view, and I had no problems at all installing the card in a Win 10 PC (after taking the usual anti‑static precautions). With the card installed, Windows 10 found the drivers and offered both the configuration window and the TotalMix app on first bootup. RME’s drivers support operation of up to three AIO‑Pro cards (or any combination of three HDSPe cards, actually) provided they are synchronised to each other.

The new AIO‑Pro card can still be coupled to either the old TCO or current WCM accessory cards for enhanced external clocking facilities, and the new card also retains on‑board connections to receive S/PDIF directly from a CD‑ROM drive, or for multicard synchronisation. As with all RME interfaces, the AIO‑Pro’s software installation includes not only the familiar and immensely powerful TotalMix digital monitoring mixer app, but the ever‑useful DIGICheck metering and analysis suite too.

Comparing the new AIO‑Pro to my old AIO card I quickly noticed the improved headphone amplifier which seemed cleaner and more powerful with both low (36Ω AKG) and high (300Ω Sennheiser) reference phones. I rarely used the balanced analogue connections of my original AIO card, much preferring to use external high‑quality A‑D and D‑As instead (a selection of Apogee, Crookwood, Drawmer and Benchmark units). However, the new AIO‑Pro’s converters matched or bettered their performance, both objectively and subjectively, and I would be quite happy to rely purely on the card’s internal converters for high‑quality work — which is not something I was expecting at all! I was hugely impressed with the ADI‑2 Pro interface when I reviewed it a few years ago, and it seems much of that aural magic has been transplanted into the new AIO‑Pro.

The AIO‑Pro is a very welcome and most impressive update to RME’s HDSPe range, and I can’t recommend it highly enough.

So, all in all, RME’s new AIO‑Pro card brings significant technical improvements over its predecessor, alongside some very worthwhile practical improvements. While internal PCIe cards won’t and don’t suit everyone’s requirements, for those who prefer the tidy integration and convenience of a card installed inside the desktop computer the AIO‑Pro represents the current state of the art. It delivers a superb technical performance via its analogue I/O, rivalling many high‑end outboard converters, while also providing exceptional versatility across 30 audio channels (14 in and 16 out) presented in a useful variety of analogue and digital formats. The icing on the cake for me is the updated analogue level‑matching configurations which finally provide full compatibility with +24dBu pro installations.

The AIO‑Pro is a very welcome and most impressive update to RME’s HDSPe range, and I can’t recommend it highly enough. Sadly for RME, I’ve lost my screwdriver and so am unable to remove the review card from my studio PC. Really sorry about that...

A substantial make‑over of RME’s popular and versatile AIO card that takes it to the highest levels of technical performance, with enhanced configurability and operational convenience.