As rock historians will know, Roger Mayer worked closely with Jimi Hendrix in the Axis: Bold As Love era, when Hendrix took a special interest in Roger’s pedal designs. The Octavia that Roger designed was certainly the most distinctive effect of its era, as the only other commonly used guitar effects at the time were fuzz, wah‑wah, and tape echo. Designed in early 1967 and used by Jimi for the solo in the track ‘Purple Haze’ (recorded less than a month after he first met Roger), the effect is also evident on ‘Fire’ and several tracks that Jimi recorded with his Band Of Gypsys line‑up in 1970. 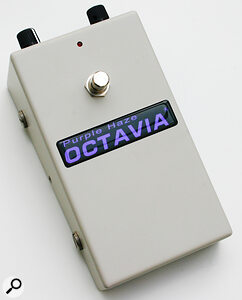 Using all analogue circuitry (digital wasn’t around in audio circles at that time!), the Octavia generates a sound an octave higher than the input note. This is achieved through a clever arrangement of full wave rectification, waveform shaping and other subtleties, which Roger refers to as electronic mirror imaging. The circuit responds to player dynamics and reacts to the harmonic output of the guitar due to pickup selection or playing technique.

Roger already produces the Rocket Styled Octavia, which remains faithful to his original transformerless version of the circuit. The new Purple Haze Octavia still delivers the classic original sound, but it is more pedalboard‑friendly and has more refined circuitry. This pedal is available strictly as a limited edition of 100 pieces, and although the price might make you do a double take, do bear in mind that Jimi’s original Band Of Gypsys Octavia sold at auction for $70,400!

Built into the classic, original wedge‑shaped metal case and powered either by a 9V battery or an optional PSU, the all‑discrete circuit includes a Wide Bandwidth Ferrite Transformer, as did the original Purple Haze model, plus there are circuit enhancements that include a second stage of amplification to give a useful range of boost. The pedal can also be run at voltages up to 24V, for increased headroom, while its ‘studio amplifier’ low‑impedance output stage can drive long cables with no tonal loss.

Constructionally, the pedal is very well engineered and makes use of a six‑layer printed circuit board to provide additional screening. Interestingly, the PSU socket is inside the base of the pedal, with an access slot in the side of the case for the cable. This makes pedalboard installation very secure, needing a power lead with a right‑angled connector to fit into the case. However, battery life is in excess of 100 hours should you prefer to run it that way. Diode protection is used to safeguard the circuit in the event of a wrong polarity connection, while three stages of on‑board filtering ensure a clean supply from less than optimal external power supplies. The Volume pot includes a switch to turn off the power. Removing the input jack also turns off the power but if you have the pedal permanently plugged in and want to use battery power for whatever reason, you can switch off the power using the Volume pot alone. 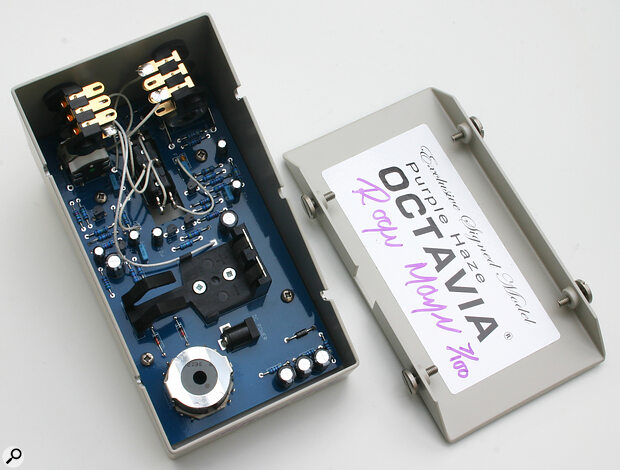 The Purple Haze Octavia’s production run has been limited to 100 units.

While some competing octave pedals inspired by Roger’s invention combine fuzz and octave effects in the same pedal, with separate drive, level and tone controls for the fuzz section, the Purple Haze Octavia produces the octave effect and a degree of distortion pre the doubling stage using only two controls: Volume and Octave. The higher the Octave setting, the greater the amount of distortion. The legend for these controls is printed on the underside of the case, as per the original, while Roger’s signature is to be found inside the case’s base plate and on the end of the pedal.

The upper harmonics are more controllable if the neck pickup is selected and the tone control set to roll off some treble.

The sound is quite different if a separate fuzz unit is used in front of the Octavia, which would require a lower setting of the Octave control; Jimi apparently placed the Octavia after his fuzz and wah units when playing live. One playing tip from Roger is that the upper harmonics are more controllable if the neck pickup is selected and the tone control set to roll off some treble, presumably because this gives the circuit a simpler, more pure, waveform to deal with. The effect also favours high notes on the unwound plain strings, as they produce a less complex signal. This was borne out in practice, with the pedal delivering the very recognisable, anarchic octave quality of the original. Certainly the effect is very different from a digital octave generator; it produces a much more complex set of overtones, and if you use a treble pickup with the tone wide open, the end result can end up sounding very brash.

Given the significant cost of this pedal, it’s probably going to appeal mainly to those who already know what to expect from it, though the limited production run may also make it of interest to collectors. If you know the sound of the original, I can confirm that this pedal nails it. But at the same time it provides a wider range of control because of that extra gain stage — so you can get things sounding very dirty indeed, without recourse to a dedicated fuzz box. It’s also less noisy, because of the new circuit board and intensive power filtering.