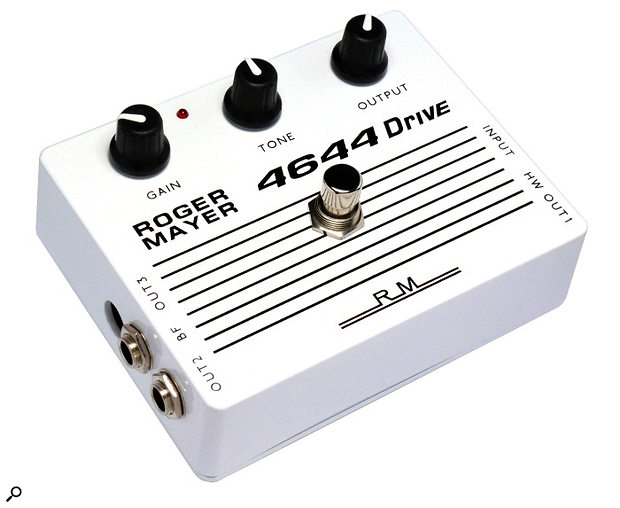 A guitar overdrive pedal sporting three knobs and a footswitch is not exactly a new or novel concept, but when it is designed and built by Roger Mayer, you have to take notice. If anyone can claim to have been there ‘back in the day’, it is Roger — he built pedals for such luminaries as Jimi Hendrix and Jimmy Page back in the 1960s. His portfolio also includes some impressive studio gear such as the RM58 Limiter, RM68 Noise Gate and the excellent 456HD tape emulator. I loved his 615 Smooth compressor pedal, which we reviewed not long ago, so when Roger phoned me to say he had developed a new overdrive pedal, I was very keen to give it a try.

Enclosed in a sturdy cast-metal housing, the 4644 pedal can run from batteries (up to 150 hours running from a 9V alkaline battery) or an external centre-negative power supply — internal filtering is fitted to clean up the power, and a diode protects against damage if the wrong polarity PSU is inadvertently connected. The controls follow the expected drive, level and tone formula, though the control layout is pretty much the only way in which Mayer has stuck to the conventional formula.

While so many overdrive pedals are essentially variations on the Tube Screamer or MXR Distortion Plus theme, both of which use op-amp ICs, Roger developed a completely new four-stage circuit for the 4644 based on discrete components and bi-polar transistors (rather than FETs). The circuit has an unusually wide audio bandwidth for a guitar pedal and utilises what Roger terms Feed Forward Drive to generate harmonics without introducing phase or time-smear errors to compromise the sound. The result is a very touch-responsive device, so that instead of kicking the pedal in for solos, you can leave it on and then ride the guitar’s volume control to go from virtually clean to seriously raunchy. The tone circuit is passive and is designed to play nicely with both single-coil pickups and humbuckers.

The 4644 Drive has more than the expected number of jack sockets, as its true hard-wired-when-bypassed output is augmented by two buffered outputs, capable of driving long cable lengths without the cable capacitance sucking out all the high end. Both buffered outputs are disconnected when the hard-wire output is in use.

Too many drive pedals seem to lose focus on anything but the lowest settings, and while this may help disguise sloppy playing, it doesn’t do you any favours when you’re trying to deliver a sound that can cut through a mix. Not so the 4644: the distortion feels very amp-like and goes from virtually clean, via bluesy to classic rock. It’s probably not the pedal for shred metal, unless you team it with a second drive pedal, as stupid amounts of gain is not what it’s about. That said, there’s plenty of output level available if you need to overdrive the front end of your amp. The 4644 loves power chords and it really sings when you dig in to notes, which encourages you to interact with it via your playing dynamics. As a front end to a software-based recording system it also produces excellent results.

For an even more singing sustain, the pedal sounds wonderful when teamed with Roger’s 615 Smooth compressor. Although for the average guitarist budgeting for both pedals may be a little scary, if you’re working in the studio, where you need an overdrive that’s both technically and artistically at the top of its game, the cost might just be worth it. Once again, Roger has managed to prove that even within a market sector that’s more crowded than Oxford Street in the run up to Christmas, he can still pull something new out of his bag of tricks.