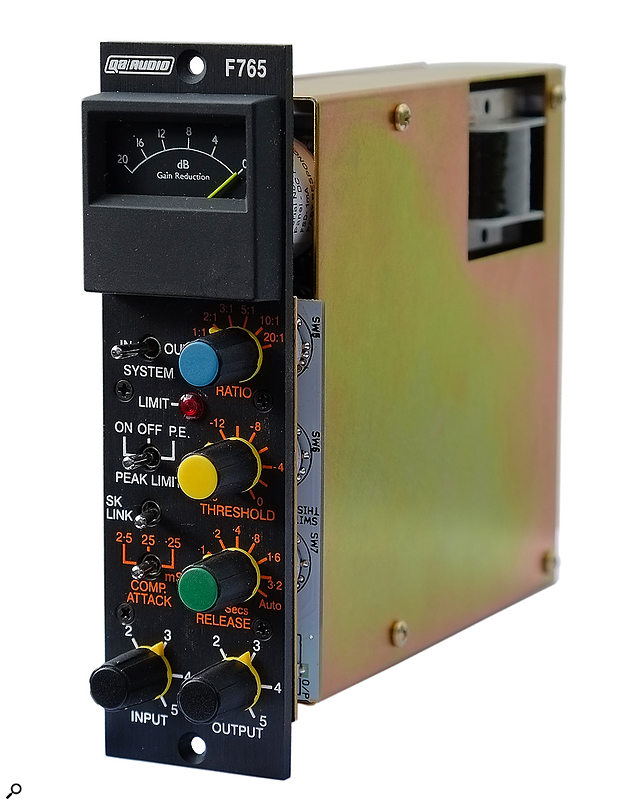 The classic sound of the ADR Compex is back again — this time in API Lunchbox format!

One of my all-time favourite dynamics processors is the original Audio & Design (Recording) F760X-RS — better known as the Compex. When it was introduced in the late 1960s this really was an innovative and advanced dynamics processor, with the unique feature that each channel enjoyed a compressor, limiter and expander, with their three separate side-chains collectively controlling a shared FET ‘vari-loss’ attenuator. This made it far more powerful and flexible than virtually anything else on the market at the time, and few products have matched its capabilities since, either!

Of course the original Compex has long since been out of production and, although vintage models change hands for considerable sums, they can be pretty temperamental because their construction involves lots of separate circuit boards and edge connectors. Thankfully though, American boutique manufacturers Q2 Audio licensed the design from A&D(R) a few years ago and have completely re-engineered it to modern standards. So the Compex lives again, and the new model is almost indistinguishable from the original in both looks and sound, while also being totally reliable.

I reviewed Q2’s spectacular reissue in SOS February 2014, and the online version of that review (http://sosm.ag/q2-compex) contains a lot of background information on the history, design, features and applications of this iconic 1970s dynamics processor and its various siblings. Why am I telling you all this? Well, Q2 Audio have recently released a 500-series variant on the same theme.

A&D(R) employed a specific product numbering convention (see 'Product Pedigree' box) and Q2 have continued this with their new model, the F765. The ‘7’ comes from the original 700-series compressors, and the ‘6’ means it has a limiter, too. However, the absence of the ‘X’ and ‘RS’ tells us that it doesn’t have an expander, isn’t rackmountable, and doesn’t have two channels. But what of the ‘5’? Well, Q2 have added that to indicate this new product has been formatted as a 500-series module — something the company promised to do back in 2014 when they launched the full Compex.

So, what we have here is a single-channel, single-module-width 500-series unit which retains the look and feel of a traditional A&D(R) product, with a black front panel and white and orange control legends. It also features a classic white-on-black gain-reduction meter and distinctively coloured knop caps. It’s interesting to note that although Audio & Design (Recording) produced a similarly equipped compressor-limiter module back in the late ‘60s (called the F760-N; see box), Q2 Audio have deliberately chosen not to replicate that unit’s control layout here. Instead they’ve chosen — sensibly — to modify the very idiosyncratic styling of the later Compex.

Starting at the bottom, the F765 features a pair of black-capped potentiometers with white markings to adjust the input and output levels. Three rotary switches arranged vertically on the right-hand side set the release time (green), threshold (yellow), and ratio (blue), and there are four toggle switches on the left-hand side for bypassing the unit, engaging the peak limiter (with or without the pre-emphasis option), stereo linking, and selecting the attack time. Dominating the top of the panel is that classic right-hand-zero gain-reduction meter, calibrated in 4dB increments to 20dB.

Anyone familiar with the original Compex will feel right at home, as all the facilities and even the assignment of coloured knobs is very similar. The peak limiter’s three-way toggle switch offers off, on, or on-with-pre-emphasis — the latter introducing an HF boost into the side-chain, which is so useful for de-essing purposes. The limiter operates with the Compex’s extremely fast limiting attack time (under 0.25ms), along with its fixed 250ms recovery time, and a fixed 100:1 ratio. As the limiter’s threshold is fixed internally, the extent of signal limiting is determined by the initial adjustment of the input level control, while the maximum (limited) output level is set with, er, the output control. This way of working may seem unfamiliar and complicated to some, but it is allows perfect integration with any desired system operating levels and is a very versatile engineering solution — but it does rely on the user adjusting the input and output level controls correctly at the beginning of a session!

The compressor section’s threshold switch is adjustable in 2dB steps between 0 and -20 dB — the 0dB reference being the same as that previously established for the limiter’s threshold via the input level control. Five soft-knee ratio options are provided on another rotary switch (1:1, 2:1, 3:1, 5:1, 10:1 and 20:1), and three selectable attack times via a toggle of 0.25, 2.5 or 25 ms. The F765 retains the infamous ‘gotcha’ trap as the Compex of placing the slowest attack time in the centre position! The release time is controlled with an eight-way rotary switch, ranging from 25ms to 3.2 seconds plus an ‘Auto-Recovery’ mode with a dual time-constant, such that transient peaks initially trigger a very fast recovery phase before switching to a much slower recovery time as the gain reduction approaches zero.

All of the electronics, hidden away behind a fully enclosing steel case, are contained on three circuit boards. One is mounted directly behind the front-panel controls, while a main board covers most of the available floor area with a third small daughter-card carrying the peak limiter’s side-chain circuitry on top. The circuitry is entirely discrete — there are no op-amps here — using a mix of both surface-mount and through-hole components with both SMD and conventional transistors aplenty! Of particular note is the inclusion of an output transformer, since the original Compex features unbalanced inputs and outputs. Overall, it’s very well put together with good-quality parts. 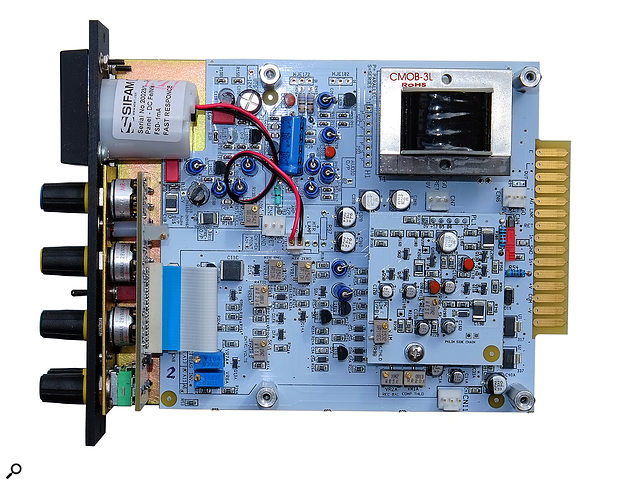 Unlike the original Compex, which had unbalanced outputs, the new F765 includes a chunky output-balancing transformer.

One unexpected bonus feature is the inclusion of an insert point for the compressor’s side-chain, though this is only accessible if the module is mounted in a Radial Workhorse rack (or compatible system) equipped with an ‘Omniport’ connection. Radial developed their own extended 500-series interface specification, which assigns pins 7 and 9 on the edge connector for this Omniport connection (the API spec originally listed these connections as a second balanced input option). Module developers are at liberty to use the Omniport as an extra balanced input, balanced output, or unbalanced insert depending on the required functionality, and in the case of the F765 it is used for an unbalanced send and return for the compressor’s side-chain send. As the Omniport functionality is not universally available on all 500-series racks, the F765 ships with a jumper link in place to bypass the insert point and retain normal side-chain operation.

Given the compact size of a 500-series module it’s inevitable that the Compex’s expander section has had to be omitted in the F765, and that’s a shame because I always found that a very useful feature of the original device. (Perhaps Q2 Audio will consider marketing a double-width module offering the full Compex signal path in the future?) Nevertheless, the F765’s controls are well spaced, easy to use and feel robust, although the orange panel markings can be difficult to read in low light.

Overall, this is a very competent and capable compressor-limiter, retaining all the speed, versatility, and deliciously transparent character of the original. The speed aspect is worth further comment as its 250us attack time options in the limiter (and compressor) can do serious damage to initial transients with some material, particularly on ‘delicate’ sources like voices, pianos and so on. It can create a rather brutal, edgy character, often with nasty audible clicks. On the other hand this transient-changing characteristic can be positively beneficial when processing percussive instruments — it’s just a case of using the tools provided appropriately and intelligently. The compressor’s gently progressive soft-knee character and auto-recovery mode help to keep its dynamic manipulations unintrusive when required, but always highly effective, and I found it ideally suited to taming bass guitars and challenging vocals as well as to help shape lacklustre drum tracks.

As I reviewed the F765 in a standard API Lunchbox rack, I’m afraid I can’t remark upon the provision of its side-chain insert point in practice, although I can see that it would be a very useful facility indeed in some circumstances. Also, as I received only a single F765 I can’t comment upon the accuracy of gain-tracking when stereo-linked. However, my previous experience with the rackmount Compex suggests that both of these facilities should work perfectly and exactly as intended.

It’s certainly true that the F765 is about as far away from a ‘one-knob compressor’ as it can get. This is a thinking-person’s dynamic processor and it requires some dedication (and even a read of the manual) to really be able to use it correctly. However, the investment is well-rewarded in the device’s remarkable versatility and attractively flexible sound quality. The F765 is a very welcome addition to the 500-series dynamics market.

The 500-series market is awash with dynamics modules, but for around the same price as the F765 (and in the same single module format) other attractive options include the API 527, Chandler Little Devil, and Crane Song Falcon.

The Compex first appeared in the second half of the 1960s in the form of a vertically oriented module called the F760-N. The model number was derived from its combination of the company’s 700-series compressor and 600-series limiter design, while the N signified its construction as a European DIN-sized module, allowing it to be integrated into a wide range of commercial recording consoles of the era. The expander facility wasn’t added until 1972, when the module was re-issued as the F760X-N, and shortly afterwards it was re-engineered as a rackmount stereo version, with the model number, F760X-RS. Later variants incorporated elements of the company’s 800-series LCR-based equaliser (F768) and 900-series parametric equaliser (the F769X-R, better known as the Vocal Stressor).

A simplified 500-series version of the Compex which omits the expander but retains the single Vari-Loss FET gain-reduction element shared by the fast limiter and versatile compressor side-chains.