The Origin Effects SlideRig is a unique compressor pedal designed primarily for electric slide guitarists. Building on the Urei 1176-inspired design of Origin’s flagship Cali76 compressor, the SlideRig sets out to reproduce the peerless slide guitar sound of Little Feat’s Lowell George, who would daisy-chain together two 1176s in the studio to achieve a crystal-clear yet endlessly sustaining sound. The pedal has won countless admirers, with slide and steel specialists and conventional players among them, and Origin have now extended their compact range to include two new versions of the SlideRig. 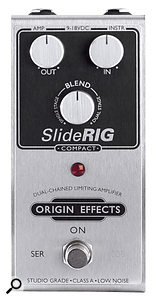 As with the Cali76, there are both Compact and Compact Deluxe versions available. The former is slightly cheaper and more user-friendly, while the latter offers some desirable in-depth features. Both use the same circuit topology as the original, with two dual-chained Cali76 blocks inside the box. The SlideRig Compact is devastatingly simple to use, with only three knobs to worry about. The input-gain control also sets the amount of compression, the output control applies make-up gain and the central blend knob mixes the output of the two compressors, allowing you to select single-stage or dual-stage compression at either extreme, or a mix of the two. In contrast, the SlideRig Compact Deluxe offers individual level controls for each stage, plus an additional dry level knob, allowing you to precisely blend the two and experiment with parallel compression.

Used side by side, these pedals deliver exactly the same sound and, indeed, sound all but identical to the original, full-sized SlideRig — that’s no mean feat given the reduction in size to roughly a third of the original’s dimensions. Attack and release times are fixed, as is the compression ratio, a parameter previously adjustable on the original SlideRig. These compact pedals are also mains-power only — presumably there wasn’t space for a 9V cell within this greatly reduced enclosure. In practice, neither feels like a great loss. I personally find the pedals much easier to dial in than the original SlideRig and the ability to mix single- and dual-stage compression — something not available on the dual-stage-only original — makes for a much more versatile effect.

The SlideRig Compact is particularly simple to operate, with its single blend knob that might as well be labelled ‘more sustain’! Perhaps the best way to understand the sound of these pedals is to imagine the kind of compression, sustain and touch-sensitivity you get from an overdrive or distortion pedal running hot, but without any distortion whatsoever. What you get is ultra-clear and glassy sustain that just goes on and on. The preset attack and release give a pleasing, rounded plunkiness to the pick attack and the strings become extremely sensitive to the slightest touch, so sloppy playing is quickly found out. But for slide playing, the overall effect is simply superb, levelling out string volume and delivering oodles of gorgeous sustain. 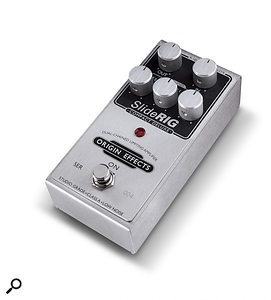 As with all of Origin’s compressors, the unrestricted frequency range and lack of additional noise are extremely impressive. Obviously, when you’re applying this much compression (or, in effect, limiting, when it comes to the dual-stage output), noise from the guitar’s pickups will be considerably amplified, but there’s little in the way of extra noise from the pedals themselves.

The SlideRig Compact is by no means limited to slide playing, and blending right over to the single-stage output delivers instant chimey arpeggios and solo sustain. From there you can adjust how much compression you want to apply by balancing the input and output gain. The Compact Deluxe has the edge when it comes to versatility, however, as the dry level control means you can blend the natural dynamics of your playing back in, creating an addictive combination of outrageous sustain and full dynamic integrity. This extra facility, alongside the separate single- and dual-stage blend controls, makes the Compact Deluxe a no-brainer if your budget will stretch the extra distance, especially as it remains devastatingly simple to use. But really either pedal would make a worthy addition to a discerning guitarist’s pedalboard, particularly if clean sounds make up a large part of their repertoire. For electric slide guitarists, the verdict is even simpler — you’ve simply got to try one of these!