Given the ‘2’ in the title, it will come as no surprise that Morphestra 2 is an evolution of a previous product. In this case, it is actually two products: Morphestra and Morphestra Generations. All the original sample content from these two titles is included, but a further 10GB of new samples are included in this latest release, bringing the total up to 25GB. The samples themselves are presented across some 5000 ‘morphed’ instruments and multis and are apparently all originally derived from orchestra recordings.

This is a Kontakt library and all the original ‘Generations’ patches are included. However, access to the v2 sounds is provided via the impressive, powerful, and really very deep, ‘multi-core’ user interface (similar to that found in other recent Sample Logic products such as Cinemorphx and Cinematic Guitars Infinity). As such, you load the single Morphestra 2 Kontakt instrument and then access individual presets from the browser within the dedicated front-end. In terms of just how deep you want to get, this front-end is really the key to unlocking the full potential of the weighty sample library. 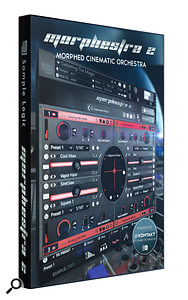 The interface allows you to blend and process up to eight sound sources into a single patch, organised as four ‘cores’ of two sounds each. The range of sound-manipulation options, alongside some excellent automation possibilities (that include the powerful Step Animator) is, frankly, staggering. For example, you can automate the blend between the pair of sound sources within each core. On top of this, you can automate the blend between the cores using the 3D mixer (the oval-shaped X/Y pad in the centre of the main screen). The effects options are equally impressive and comprehensive and include all reverb, delay, modulation, cab modelling, distortion, tape saturation and various filter types.

The Step Animator feature adds a further considerable twist. This allows you to build custom animation patterns with lanes allowing the control of note velocity, pitch, length, arpeggiation, transposition, stutter rate and pan. By default, Step Animation patterns are 16 steps in length, but you can go up to 128 steps if you want animation sequences that extend over longer time bases.

If this all makes Morphestra 2’s front-end sound both deep and powerful, then it is. There is a huge set of sound-design options here, providing you’re prepared to invest a little bit of time in mastering it all. Fortunately, Sample Logic have done a considerable amount of work for you by supplying such an extensive and well-structured set of presets. The presets work at a number of levels though, including multi-cores, single-cores, single sounds, Step Animator presets and effects presets. Do pour yourself a stiff drink and prepare a sandwich before you start to explore — you could be some time!

In terms of the types of sounds themselves, the Morphestra title — implying orchestral sounds with a considerable twist — is just about spot on. In many cases, you can hear the underlying orchestral source — whether that’s strings, bass, woodwind, percussion or some ensemble — but these have been manipulated in all sorts of different ways. The presets are organised into a range of both single-core (up to two sounds blended) and multi-core (up to eight sounds blended) categories such as atmospheres, loops, instrumentals and percussive. For the single-core sounds you can also filter by mood.

Amongst the Atmospheres selection, there are some hugely impressive sounds. These cover a range of moods, but there are lots of preset patches here where, frankly, you could push just one or two keys and easily create a moody, evolving soundbed with an absolute minimum of time or effort. And if it’s just a shorter cue or two you are after, the same can be said of the multi-core ‘one-note combo’ patches. These consist of a number of elements — percussion, rhythmic and melodic — overlaid. If a deadline looms, this is perhaps a source of instant solutions (even if music creation should not really be this simple).

The Percussive and Loops selections are equally impressive and there are some big sounds amongst this lot. Thankfully (for my personal requirement that I ought to do something useful as part of the music creation process), while you can easily create a simple rhythmic cue from one of these presets, finding two or three to layer together in a cohesive fashion is much more satisfying and the results can be spectacular. Again, the sound sources are undoubtedly orchestral in origin but many of the presets have a real modern, cutting-edge, feel.

If you need something more obviously ‘playable’ and melodic to sit over all these rhythmic and soundbed presets then the Instrumentals category has plenty to offer. There are a good selection of sounds here based upon pianos, bells, and other melodic percussion, but also sounds where the original sound source is more difficult to identify because of the morphing applied. The quality is, however, just as high as in the other preset categories.

For media composers working on contemporary film and TV scores, Morphestra 2 is going to be a fabulous resource. It is ‘orchestral’ enough that it would give a cue that flavour but, equally, there are enough sound-design/electronic influences to make it sound very modern. Whether it’s dark and moody, uplifting and other-worldly or just downright powerful and scary, Morphestra 2 has plenty to offer. The price tag perhaps makes the product something for the more serious composer (although there are savings to be had if you already own one of the earlier Morphestra titles), but this is the only thing that might make you go ‘ouch!’. Otherwise, Morphestra 2 is top-notch stuff and, as a source of ‘hybrid’ orchestra-meets-electronica sounds, will, I’m sure, become a weapon of choice for many working composers.